India's hockey coach Michael Nobbs may be disappointed at losing out on the Champions Challenge title and with it a spot in the next Champions Trophy, but he is only looking at the positives to be taken from the defeat to Belgium in the final.

India led 2-0 and then 3-1 but allowed Belgium to come back in the last 15 minutes to win 4-3 through a last-minute goal by Florent van Aubel in Johannesburg on Sunday. 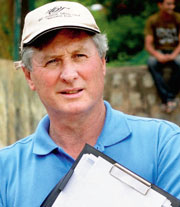 "We had the match in control but just gave it away. We were just a game away from making it to the Champions Trophy which would have been a big boost," said Nobbs.

"It is very disappointing not to have won after having things under control at 3-1 in the second half," he added.

Seeking to repeat their 2001 title win, India scored through VR Raghunath (23rd minutes) and Sandeep Singh (39th) that gave them a 2-0 lead. India were again 3-1 ahead when Shivendra Singh (53rd minute) scored a field goal.

But Belgium struck back through Jerome Dekeyser, who scored two field goals in 45th and 57th minutes, while Gauthier Boccard penetrated the Indian defence with a fine deflection in the 55th minute.

Belgium's two goals from 1-3 down came when India were down to 10 players following Raghunath's yellow card for a deliberate obstruction. His omission led to gaps in the defence that the Belgians capitalised on to create openings.

"Raghu's yellow card cost us dearly. We have to learn to be able to deal with these situations and avoid mistakes like this," said Nobbs.

Nobbs said India will take several positives from this outing.

"We take several positives from this tournament and we need to make improvements before the Olympics Qualifiers," said Nobbs.

"It is better we learn from our mistakes now than in the Olympic Qualifiers," he said.