Former India captain Bhaichung Bhutia on Saturday said his ex-colleagues Climax Lawrence and Mahesh Gawli took hasty decisions to retire from international football as he felt that the duo could have served the country for some more years. 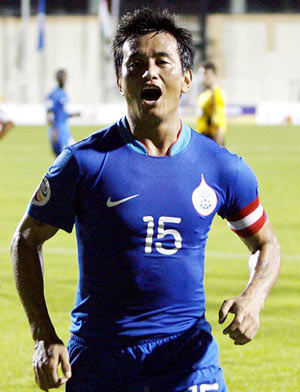 "If you ask me personally, I feel Climax and Mahesh should have played for some more years (for India). They had age on their side. They were just 32 and 31 respectively whereas when I retired I was 35," Bhutia said during the unveiling of the UEFA EURO 2012 Trophy.

"I feel they took a hasty decision," he added.

India's preparation for next month's AFC Challenge Cup did not start on a good note as they lost to higher-ranked Oman 1-5 in friendly match at Muscat on Thursday.

But all said and done, Bhutia, a veteran of many such occasions, said the fans should not take the result of the friendly seriously as India have the potential of springing some surprises in the March 8-19 event in Kathmandu.

"I watched the friendly match against Oman. But we can't judge our team on the basis of a friendly because in such games we tend to try out a few things, a few combinations. That is what (coach) Savio Medeira tried against Oman," he said.

"I know it will be difficult for us (in AFC Challenge Cup) as we are in a tough group along with North Korea, but nothing is impossible," an optimistic Bhutia added.

Bhutia was also of the view that the All India Football Federation need to engage more states in the I-League to make it popular.

"According to me, the AIFF need to spread the I-League to the different parts of the country. We just can't have 80 percent of clubs from Kolkata and Goa participating in the tournament. They should manage the league properly if they wish to develop the game," he said.

"Football is one of the fastest growing sports in India in terms of viewership and popularity, but our national team needs to convert it into results at the international stage.

And for that what we need is a sound youth development programme and good infrastructure. We need a good support system," Bhutia said.