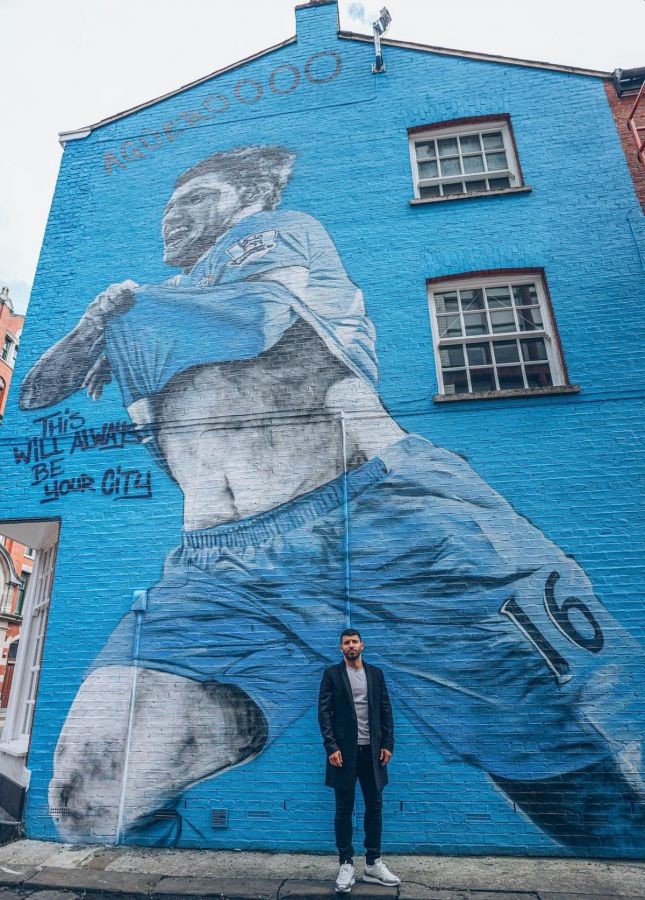 IMAGE: Sergio Kun Aguero was presented with a mosaic inspired by his first-ever Manchester City goal among other honours. Photograph: PTI

Manchester City on Sunday unveiled further tributes to striker Sergio Aguero ahead of his final game for the club at the Etihad Stadium.

Sergio Aguero was presented with a mosaic inspired by his first-ever Manchester City goal against Swansea City in 2011. The mosaic has been installed at the City Football Academy, beside a pitch that will now bear his name, having been dedicated to the club's all-time record goal-scorer.

Sergio was also pictured with all 15 of the trophies he has won during his time in Manchester, and also at the Northern Quarter where a mural of Sergio's famous 93:20 moment has been painted.

Aguero will be playing his final Premier League game for the club later on Saturday.

He has been rumoured to join Barcelona in the summer transfer window.

The Argentine striker -- the club's all-time record goalscorer -- will don the City shirt for the final time at the Etihad Stadium on Sunday, as the Premier League champions will welcome Everton in the Premier League's season finale.

Aguero had joined City in 2011 and he has made 388 appearances in all competitions, scoring 258 goals along the way.

Manchester City has already secured the Premier League title for 2020-21 season. The side has also made it to the finals of the Champions League and they will be locking horns against Chelsea on May 29 in Porto.