As US Vice President Joe Biden built trust with China in Beijing's corridors of power, goodwill between the two nations unravelled Thursday night on a nearby basketball court, where players beat each other up and even a chair was thrown.

A 'friendship' game between Washington's Georgetown Hoyas and Chinese professional side the Bayi Military Rockets erupted into a brawl as the match wound down at Beijing's Olympic Stadium. It was unclear what triggered the fighting.

Players traded blows, someone in the crowd flung a chair, and fans tossed full water bottles at the Hoyas players and coaches as they headed to the locker room, writing off the rest of the game. 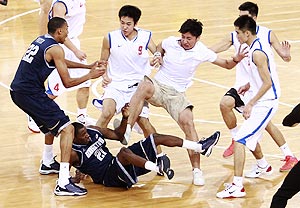 In China, state media did not report on the incident and microblogs were mostly silent as censors worked quickly to delete any references to the fight.

"Even the news about the fight between the Chinese and US basketball teams needs to be cut," said a microblogger named Yinnu.

The brawl broke out one night after Biden, who is in Beijing on a four-day visit to discuss US-Chinese economic relations, attended a Georgetown game against another Chinese club. That game, which Georgetown won, passed without a fist fight.

The games are part of a "China-US Basketball Friendship Match" in Beijing, according to the Washington Post. The Hoyas intended to continue with the rest of their 10-day trip in China, including other scheduled matches in Shanghai.

The Bayi Rockets is a professional basketball team associated with China's People's Liberation Army (PLA). The name "Bayi" refers to August 1, 1927, the founding date of the PLA.

Just as many of China's Asian neighbours say its increasing aggression is to blame for trouble in the South China Sea, some Hoyas fans took to Twitter to accuse the Chinese team of starting the tussle.

"All that goodwill Yao Ming garnered for Chinese people in USA, GONE," tweeted a person with the username of JAIMECITOU, referring to the recently retired Chinese basketball star. "Not first time Chinese Team fought on court ... Disgrace."

Another user called cgallaher3 said: "All out brawl at a basketball game in China. This is why the NBA won't expand there."

After an estimated half-dozen individual altercations on the court, some Chinese onlookers joined the fracas, the Washington Post reported late on Thursday.

As the brawl spilled beyond the court, an unidentified Bayi player pushed Georgetown's Aaron Bowen to the ground before repeatedly punching the sophomore guard while sitting on his chest, the paper said.

"Tonight, two great teams played a very competitive game that unfortunately ended after heated exchanges with both teams," coach John Thompson III said in a statement on Georgetown's website. "We sincerely regret that this situation occurred."

"We remain grateful for the opportunity our student-athletes are having to engage in a sport they love here in China, while strengthening their understanding of a nation we respect and admire at Georgetown University."

A staff member from the news office from China's General Administration of Sports told Reuters: "I personally heard about it this morning when I surfed the Internet, but our office leaders are on a business trip, so we have no comments and any information to publish so far."

The American team will visit cultural sites, participate in basketball clinics with Chinese students and play four exhibition matches against teams from the Chinese National Basketball Association. The players will also participate in the Nike Festival of Sport in Shanghai.

© Copyright 2021 Reuters Limited. All rights reserved. Republication or redistribution of Reuters content, including by framing or similar means, is expressly prohibited without the prior written consent of Reuters. Reuters shall not be liable for any errors or delays in the content, or for any actions taken in reliance thereon.
Related News: Bayi, South China Sea, People's Liberation Army, Joe Biden, Washington Post
SHARE THIS STORYCOMMENT
Print this article
Pakistan violates ceasefire, targets Indian posts
No access of US chopper wreckage to China: Pak
No deputy CM's post in Karnataka: Gowda 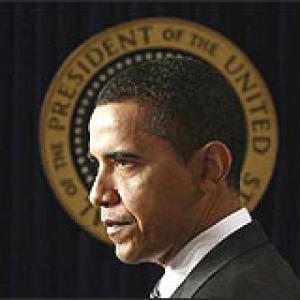