Star striker Sunil Chhetri struck twice as holders India defeated Maldives 3-1 in an entertaining semifinal to book a berth in the summit clash of the SAFF Football Championship in New Delhi.

Chhetri scored in the 69th and 90th minute after Syed Rahim Nabi had given India the lead in the 24th.

Shamweel Qasim was the scorer for Maldives as he found the net in the 60th minute at the Jawaharlal Nehru Stadium.

For India, seeking their sixth title in the tournament, this is their eighth entry into the final out of nine editions.

Chhetri, who had returned from a five-day trial stint at Glasgow Rangers just before the tournament, took the game away from Maldives, winners in 2008, by scoring two goals after both sides were locked 1-1 till the 68th minute.

India dominated for most part of the first half, which they led 1-0, though Maldives threatened to restore parity.

Savio Medeira's boys got at least three chances in the fist half besides the one that fetched them the goal.

As early as the second minute, striker Jeje Lalpekhlua fumbled and his off-balanced left-footer just in front of goal went over the bar after Maldives goalkeeper Imran Mohammed had parried a Chhetri shot. 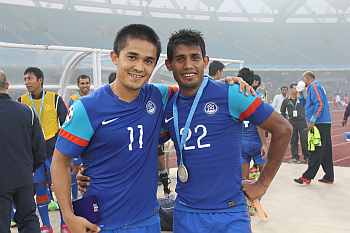 Imran again came to the rescue of his side in the 14th minute as he dived to his left to brilliantly push away a Jeje header after the Indian striker was set up by Nabi.

Eight minutes later, Chhetri found himself unmarked but his left footer from the top of the box went over the bar.

The incessant pressure yielded India's goal in the 24th minute from a dead ball situation. Clifford Miranda floated a free-kick for India in the 24th minute and a leaping Jeje could not reach for it. But Nabi's outstretched right leg touched the ball, which hit the back of the net.

Maldives tried to come back towards the close of the first session with a couple of threatening moves, with captain and star striker Ali Ashfaq in the thick of things.

A minute before the half time, Maldives got their best chance after Shamweel Qasim sent a low pass to Ashfaq who controlled Indian defender Gouramangi Singh, but his shot just missed the target by a few inches.

India nearly conceded the equaliser just after resumption but goalkeeper Karanjit Singh palmed a header by Maldives striker Ahmed Tariq in the nick of time in the 49th minute.

Maldives dominated the early part of the second session and found the equaliser around the hour mark with Akram Abdul Gani firing a scorching right-footer after Shamweel Qasim found himself free inside the box to roll in a pinpoint grounded pass.

India took the lead against the run of play with Chhetri converting from the spot after his legs were clipped inside the box by a falling Mohammed Umair.

After referee Timur Faizullin pointed to the dreaded spot, Chhetri cooly stepped himself up to send the ball to the left of Maldives goalkeeper and into the net, much to the celebration of a sparse 2000-odd crowd.

Thanks to the strike, the Indians looked a confident lot again and were finding the gaps in the opposition defence, as Maldives went for an all-out attack to find the equaliser.

Just at the stroke of regulation time, Jeje sent a low pass to Chhetri in between two defenders and the latter collected the ball, made a few strides and sent it past the advancing goalkeeper.

Chhetri, who was adjudged man of the match, has now become the leading scorer of the tournament with six goals from four matches. 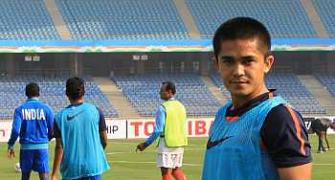 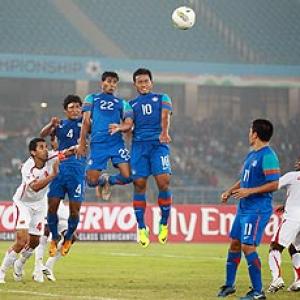