Having regained the numero uno spot in international rankings, World champion Viswanathan Anand will now look to consolidate his position at the top in the London Chess Classic that gets underway here in London, on Tuesday.

With an average ELO rating of 2724 points, the category 20 event will also see Magnus Carlsen of Norway in action along side former world champion Vladimir Kramnik of Russia and Hikaru Nakamura of United States.

The other four participants in this tournament are all English headed by Michael Adams who is currently ranked 22nd in the world and is the highest rated Englishman.

Nigel Short is another accomplished name in the game who will be in action along with Luke Mcshane and David Howell. The eight participants will play once against each other.

Anand starts as the highest rated player in the event with his two-point advantage over Carlsen. 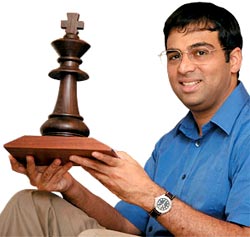 However, according to unofficial live rankings, Carlsen is in fact ahead of Anand by four points which makes this event the last one for the world champion to retain his numero uno ranking in the next list which will be published on January first.

The event is already the third in the busy schedule of Anand after Bilbao Grand Slam and Nanjing super tournament held in October.

Following this, Anand is set to take part in the Tata Steel Chess tournament (formerly Corus) at Wijk Aan Zee in the Netherlands in January and then the Amber blindfold and rapid tournament.

After his triumph over Veselin Topalov of Bulgaria in the last World Championship, Anand has been generally having a good time and a just indication of that was dethroning of Carlsen as the highest rated player in the November list.

Having regained the number one spot, Anand would like to keep it and for that he will have to do better than Carlsen in London.

From Carlsen's perspective, he will be looking to add another feather to his cap and finishing ahead of Anand might be on his agenda after his surprise refusal to be a part of the next World Championship cycle earlier this year.

Kramnik is a dangerous customer for anyone while Nakamura is a renowned expert in keeping the position together for a long time. Among the British, Howell finished a surprising third in the inaugural edition of the event last year and this time the inclusion of Anand has made the event tougher.

Nigel Short and Adams have played at the highest level for many years now.

Mcshane will be hoping for a repeat performance from a recent tournament in Holland that he won playing very well.

Along with the main event, there are many side events and Grandmaster Abhijeet Gupta, the former world junior champion, will spearhead the Indian challenge in the open.