'But as we say in Russian, anyone can be a god if he tries' 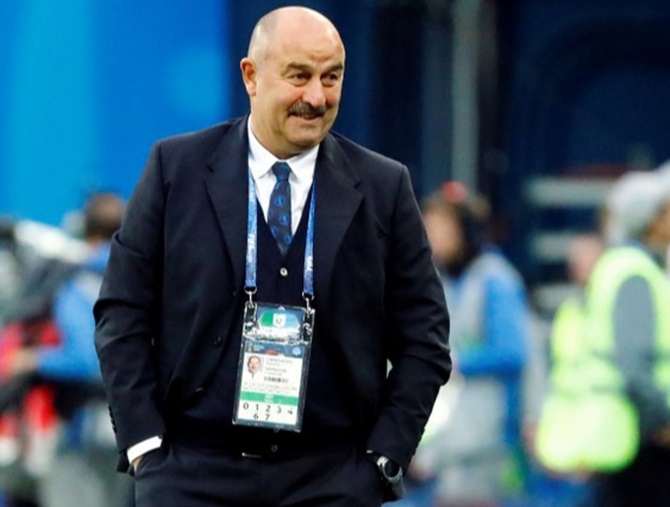 The last time Stanislav Cherchesov walked out at Moscow's Luzhniki Stadium to face Fernando Hierro's side, the Spaniards were heavy favourites but the Russians reached the next round.

Now the Russia coach hopes the World Cup hosts can repeat those exploits from 1991, when the Spartak Moscow team he played in goal for beat Real Madrid featuring Hierro in a European Cup quarter-final. Though that first leg ended goalless, Spartak ran out 3-1 winners in the return in Spain.

"That time, like now, the Spanish were the favourites," Cherchesov told reporters ahead of Sunday's second-round match when reminded of that European game 27 years on. "But as we say in Russian, anyone can be a god if he tries."

"I remember Fernando very well. He was an outstanding player and now he's an outstanding coach," Cherchesov said of Hierro, who stepped up in Russia to run the former champions' campaign after the shock sacking of Julien Lopetegui on the eve of the tournament follow his decision to join Real Madrid.

"We prepared the game well and we were able to do what no one expected," the Russia coach said of his Spartak exploits.

"Tomorrow we have a chance to do something like that again."

Cherchesov, whose team have defied many Russians' expectations by qualifying for the last 16, dismissed talk of extra pressure on his players to deliver a return for the Kremlin on its investment in hosting the global tournament.

"This is a knockout contest. It's a life-and-death match. Only one team will be going through," he said.

"But, no, it's not pressure. It's responsibility. Spain feel it. Russia feel it. If you lose, you're out."

He said his players' confidence was not dented by losing the final group game 3-0 to Uruguay after two high-scoring wins.

Midfielder Denis Cheryshev, who has lived most of his life in Spain and plays there for Villarreal, said he would be joining his Russian team mates in giving "200 percent" effort in what he hoped would be a "fiesta" of football.

"We will have a hard time," he said. "They are excellent. But we have our assets and can also play. They are one of the best teams in the world but I think we can beat anyone."

The winners in Moscow will go through to a quarter-final in Sochi against Croatia or Denmark.