Ruth Chepngetich has clocked the third fastest marathon of all-time, but did not come close to matching that in punishing conditions. Her winning time of two hours, 32 minutes, 43 seconds was the slowest ever to win the World Championships. 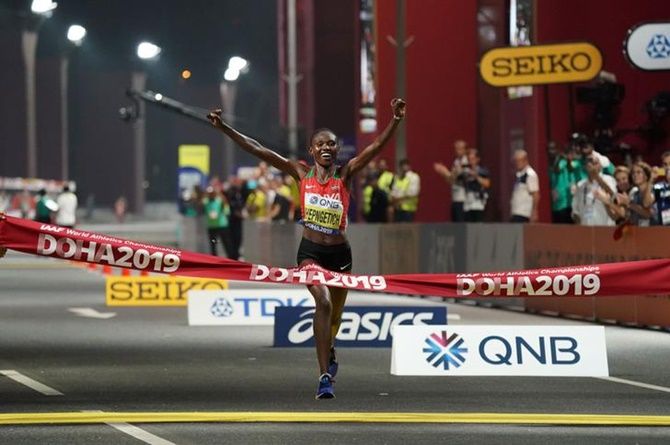 Kenya's Ruth Chepngetich overcame extreme heat and humidity to win the World Championship midnight marathon on Friday, in a gruelling test of survival that saw nearly a third of the 70 starters fail to reach the finish line.

Chepngetich, who has clocked the third fastest marathon of all-time, did not come close to matching that in the punishing conditions. Her winning time of two hours, 32 minutes, 43 seconds was the slowest ever to win the World Championships.

Still, it was enough for a comfortable victory over Bahrain's defending World champion Rose Chelimo, who settled for silver crossing more than a minute adrift.

"I am very happy with the win and bringing back the gold to Kenya," said Chepngetich. "It was a tough race but I knew what to expect as I ran in Dubai.

"I trained for this weather running in the afternoon when the sun was high.

"I want to win another for Kenya in Tokyo."

The opening day of the 10-day event began with the governing International Association of Athletics Federations (IAAF) issuing a statement that the marathon would go ahead despite concerns over extreme heat and athlete welfare.

As temperatures hovered in the mid-30s Celsius the runners waited their turn in the spotlight as the Emir of Qatar Sheikh Tamim bin Hamad al-Thani, with International Olympic Committee (IOC) president Thomas Bach sitting on one side and IAAF boss Sebastian Coe on the other, declared the championships open to an explosion of fireworks.

With the first gold medal of the championships up for grabs the women stepped up to the start line ready to tackle a steamy 26.2 miles (42.195 km) floodlit course along the waterfront of Doha's famous Corniche promenade. 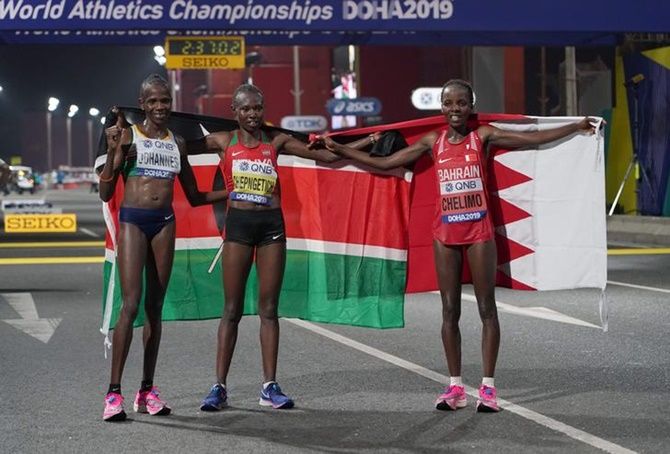 The race scheduled to begin one minute before midnight on Friday and finish in the early hours of Saturday saw the field head out right on the stroke of 12.

The midnight start tempered the sting of a searing sun but with the temperature sitting at 32.7C and the humidity index at 73% the conditions were right on the limit of what the IAAF said were allowable.

Despite IAAF assurances that athlete welfare was the top priority, some felt the conditions were so severe that the race should not have been run.

"The humidity kills you," said Volha Mazuronak of Belarus. "There is nothing to breathe. I thought I wouldn't finish.

"It's disrespect towards the athletes.

"A bunch of high-ranked officials gathered and decided that it would take (the championships) here but they are sitting in the cool and they are probably sleeping right now."

With the city's skyscrapers providing a sparkling backdrop, the runners set out on the first of six laps of the seven kilometre circuit with Sardana Trofimova, one of a handful of Russian athletes cleared to compete in Doha as an Authorised Neutral Athlete (ANA) setting the early pace.

But by the end of the first loop it was Chepngetich and Chelimo leading the way.

At 10km Chepngetich upped the pace, blowing apart the field but made her move too early and the Kenyan was reeled back in by the chasing pack that included team mates double world champion Edna Kiplagat and Visiline Jepkesho.

As the race reached the midway mark the gold medal battle had been reduced to a group of five; Chepngetich, Kiplagat, Jepkesho, Chelimo and Namibia's Helalia Johannes.

Behind the leaders the carnage began to mount as runner after runner succumbed to the brutal conditions while others were being lapped.

The pace also began to cause damage up front: Jepkesho dropped from the leading pack, trimming the medal contenders to four.

With the bell for final lap ringing Chepngetich made a devastating move, splintering the leading pack and galloping home for a decisive victory.