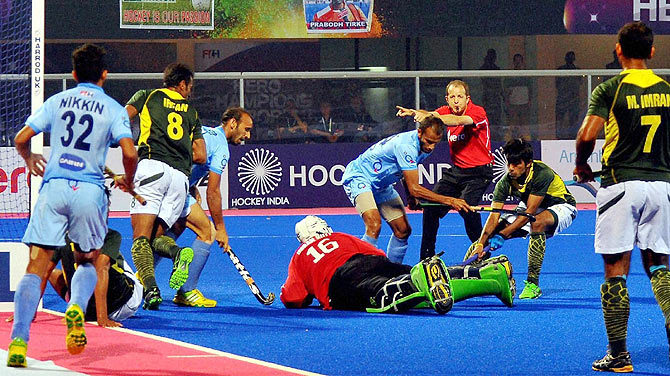 India and Pakistan players in a goal-mouth melee during the second semi-final of the Champions Trophy hockey tournament, at the Kalinga Stadium in Bhubaneswar, on Saturday. Photograph: PTI

A misfiring India squandered a golden opportunity to create history as they went down 3-4 to arch-rivals Pakistan in a high-voltage semi-final of the Hero Champions Trophy hockey tournament in Bhubaneswar on Saturday night.

Muhammad Arslan Qadir (17th and 59th minute) turned out to be Pakistan's hero, as he scored the match-winner just a minute from full-time.

The Pakistani players celebrated the victory by hurling indecent and obscene gestures towards the crowd and Indian media but were promptly rebuked by coach Shahnaz Shiekh.

It was a good chance for India to register their best-ever performance in the history of Champions Trophy but they buckled under pressure.

India's best showing in the Champions Trophy is a bronze medal in the 1982 edition of the tournament, in Amstelveen, the Netherlands. 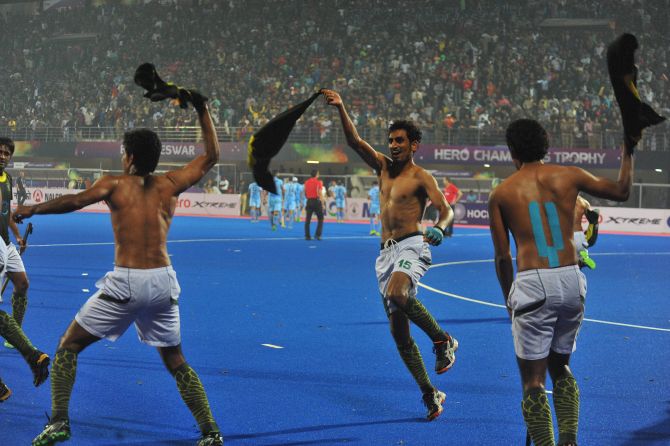 India looked nervous at the beginning and it showed in their performance. They were sloppy and kept losing the ball frequently, while Rupinder Pal Singh looked off-colour at the back.

Pakistan, on the other hand, were better organised and pressurized the Indian defence.

Rupinder was out-of-sorts, at least in the first half, as he kept losing the ball frequently. On one such occasion Pakistan created the first real scoring chance in the sixth minute, but an alert Indian goalkeeper, P R Sreejesh, came to the side's rescue with a fine save to deny Muhammad Dilbar.

But it was India who took the lead against the run of play, scoring from their first chance.

From their first penalty-corner Gurjinder Singh made no mistake in sending the ball into the left corner of the Pakistan net with a powerful flick.

Pakistan went for a referral but their appeal was disallowed.

They then won their first penalty-corner but wasted the chance in search of a variation before Sreejesh blocked Shakeel Ahmed Butt’s slap shot. 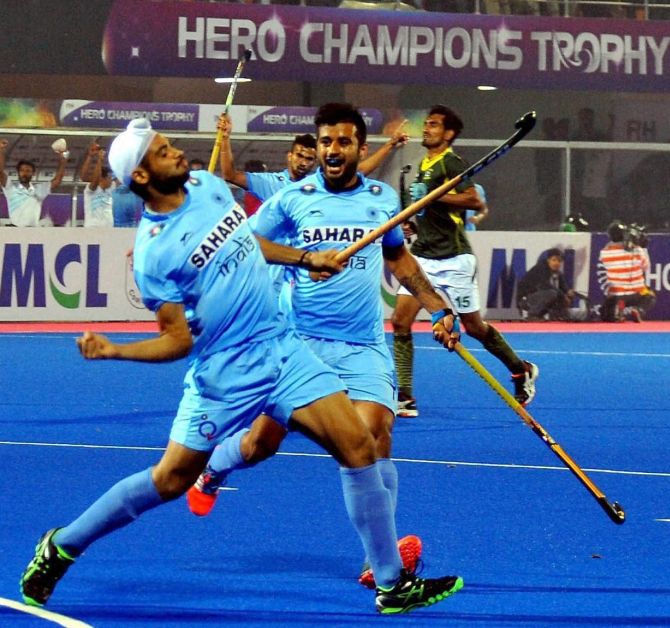 Gurbaj Singh’s 10-minute suspension for a yellow card hurt India badly as it created open spaces in the defence, resulting in Pakistan’s equaliser.

India got a golden chance to restore their lead soon but Rupinder’s try from their second penalty-corner was easily kept out by Pakistan goalkeeper Imran Butt.

Sunil created another chance before the break with a blazing run past several Pakistan defenders before setting up Nikkin, who took too much time and finally shot the ball wide as both the teams went into the breather locked 1-1.

But Pakistan hit India hard two minutes after the change of ends. The Indian backline was again to be blamed, as an unmarked Waqas pushed home from Shafqat Rasool's cross to silence the capacity crowd.

Stunned by the goal, India went on the offensive and secured two penalty-corners in succession but Raghunath wasted both.

Dharamvir equalised for India six minutes later with a reverse hit after Akashdeep Singh's fine build up, bringing smiles back on the faces of the rousing spectators.

Pumped up by the goal, India attacked in numbers and put immense pressure on the Pakistan defence.

Sardar got a bright chance to put the team ahead when Gurjinder found him unmarked inside the circle. India's skipper had ample time to choose his spot, but shot wide.

Manpreet Singh then wasted another chance when he hit wide from top of the circle minutes later.

Pakistan played the waiting game and were content in falling back on defence, hoping to strike with counter-attacks.

Their ploy worked when they won their second penalty-corner from one such counter-attack and Irfan converted with a fine variation.

India struck back immediately in the subsequent attack through Nikkin, who deflected home Gurbaj’s cross.

India had a chance to seal the match in the 56th minute when they earned their fifth penalty-corner but Gurjinder’s try was blocked by an onrushing Pakistan defender.

The miss cost India dearly as Pakistan found the back of the Indian net just a minute from the final hooter when Qadir scored from a tight angle with a reverse hit. 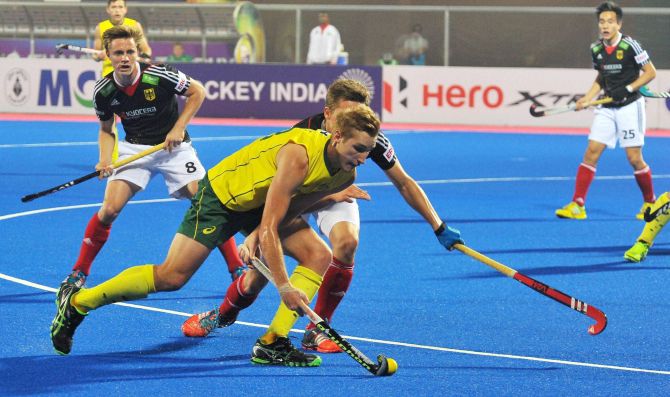 After a not-so-impressive pool outing, the Germans produced their best hockey when it mattered most and ended Australia's lengthy reign as Champions Trophy holders.

Australia were Champions Trophy winners since 2008, while Germany last won it in 2007.

The Germans started on a rousing note and raced to a two-goal lead inside the opening 10 minutes.

Oruz got the Germans off the block with a lovely feathered touch to a diagonal pass from Lukas Windfeder and then four minutes later Grambusch made it 2-0 after the ball bounced back to him following a failed clearance by the Kookaburras' defence.

But Australia came back strongly thereafter. Jeremy Hayward came close when he shot wide from close range before German goalie Nicolas Jacobi made a brilliant diving save to deny Russell Ford.

German skipper Moritz Furste then made a superb save on the post from a penalty-corner from Chris Ciriello to help his team go into the breather with a two-goal cushion.

A minute into the second half, Fuchs made it 3-0 in favour of Germany when he scored after Australian custodian Charter denied Martin Zwicker from close range.

Fuchs dodged the ball away from Charter before unleashing a beautiful punch shot into the roof of the net from a narrow angle.

Australia forged their comeback in the 34th minute when Ciriello converted a penalty-corner to register his fourth goal of the tournament.

Eight minutes later, Budgeon brought Australia right back into the match when he smashed home following a mad scramble in front of the German goal.

Sensing another goal in the offing, Australia attacked in numbers and created a few scoring opportunities but the German defence did just enough to hold on to their lead and seal a place in the final of the tournament after three editions. 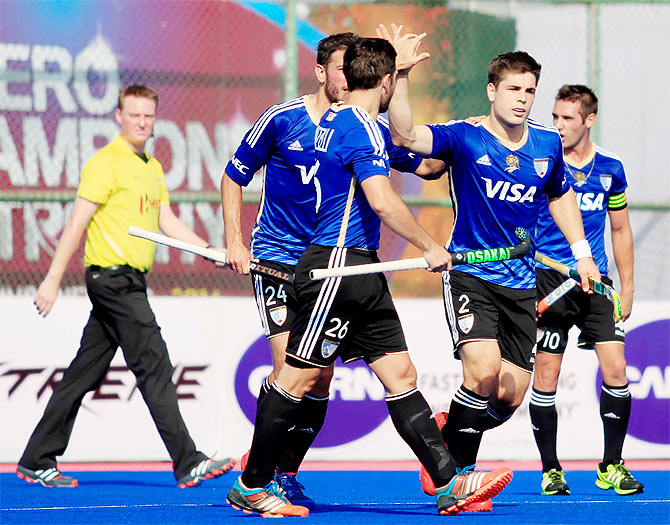 World Cup and Olympic silver medalists The Netherlands will face Argentina in the fifth-sixth place play-off match after registering wins in their respective classification games.

While the Netherlands beat Belgium 4-2 in a penalty shoot-out after both the teams were locked 2-2 at the end of regulation time, World Cup bronze medallists Argentina defeated England 2-1 in another match.

While the Netherlands will face Argentina in the fifth-sixth place classification match on Sunday, England and Belgium will square up against each other to avoid the wooden-spoon.

In the first classification match, the Netherlands took a 2-0 in the first half through two field goals from Jeroen Hertzberger (11th minute) and Sander Baart (30th) and looked well set for victory.

But the Red Lions, who were without the services of injured Simon Gougnard and Loick Luypaert, made a valiant fightback in the final quarter with goals from Tom Boon (49th) and Tanguy Cosyns (60th) to take the match into the shoot-out.

Dutch custodian Jaap Stockmann, who was brought into the match for the shoot-out, made crucial saves to deny Cosyns and Florent van Aubel.

In the second classification match of the day, drag-flick specialist Gonzalo Peillat (25th, 48th) converted two penalty-corners in the second and fourth quarter for Argentina after Ashley Jackson (12th) gave England the lead from a penalty-corner. 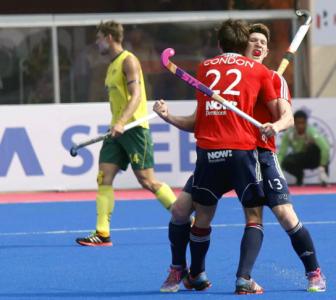 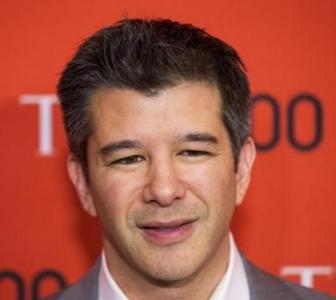 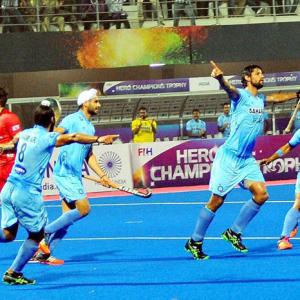 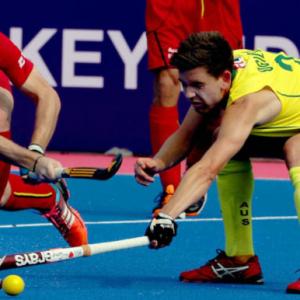