Ronaldo's treble, his second in four days following a three-goal blast in La Liga at the weekend, was complemented by a brilliant Karim Benzema bicycle kick as Real went top of Group D with six points from their two opening games.

Ambitious Zenit lost 3-2 at home to AC Milan who spent most of the summer selling their players, Tomas Hubocan putting through his own goal in the 75th minute after the Russians had recovered from two goals behind to pull level. 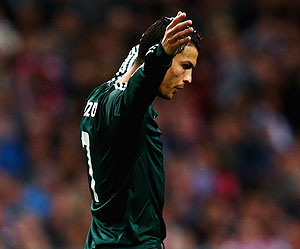 Paris St Germain lost 1-0 at Porto, who have become a stepping stone for South Americans hoping to move to big European clubs, after Colombian James Rodriguez struck a late winner.

Manchester City needed a late penalty converted by Mario Balotelli to draw 1-1 at home to Borussia Dortmund in a meeting of the Premier League and Bundesliga champions and claim their first point in Real's group.

There was also late drama at Schalke 04 where Souleymane Camara scored a 90th minute equaliser for debutants Montpellier in a 2-2 draw, their first point in the competition.

Champions League debutants Malaga, who appeared set for a rough ride after selling top players in the close season amid restructuring by their Qatari owners, instead notched their second straight 3-0 win in Group C, this time at Anderlecht.

Two goals from Eliseu and a Joaquin penalty completed a perfect week for Spain's four representatives following wins for Valencia and Barcelona on Tuesday.

Ajax, sloppy and toothless, were a shadow of the side which has won four European titles and went behind when Ronaldo pounced on a loose ball to score from close range in the 42nd minute.

Three minutes after the break, Kaka floated an inviting cross from the right and France striker Benzema leaped acrobatically to send a crashing volley past Ajax goalkeeper Kenneth Vermeer.

Niklas Moisander pulled one back before Ronaldo struck twice in three minutes, the second a delightful chip.

"Scoring three goals is important for me and I am very happy," Ronaldo told Spanish television, clutching another match ball to add to his growing collection.

"These collections are always very important for me but the most important thing is the team."

Milan's win was the first by an Italian team this season after three draws and left Zenit pointless from two games and facing a quick exit.

Struggling in Serie A after offloading several top players in attempt to cut costs, Milan raced into a two-goal lead after only 16 minutes through Urby Emanuelsen and Stephan El Shaaraway.

Brazilian forward Hulk, signed for a Russian league record 60 million euros, pulled one back in first-half stoppage time and Roman Shirokov headed an equaliser four minutes after the re-start.

But Milan took the points when Riccardo Montolivo's shot hit Zenit defender Hubocan and slid into the near corner, leaving them second in Group C with four points from two games behind Malaga.

Zenit continued a losing streak for Russian sides who have lost all four games between them so far.

PSG, who thumped Dynamo Kiev 4-1 in their opening game, struggled against a lively Porto side who started with nine South Americans.

Rodriguez sidefooted in a curling shot with seven minutes to go after Zlatan Ibrahimovic had wasted two excellent chances for the Qatari-owned French side.

Dortmund, who like City were knocked out in the group stage last season, took a deserved lead when Marco Reus pounced on a poor cross-field pass to race clear and finish past City keeper Joe Hart just after the hour.

Balotelli rescued City when he converted a penalty awarded for handball after only nine minutes on the pitch.

"We didn't play well. We didn't deserve to take this point but in the end it could be important," City manager Roberto Mancini told Sky Sports.