Cristiano Ronaldo scored one of the softest goals of his career when Spurs keeper Heurelho Gomes allowed a long-range shot bounce out of his hands in the 50th minute and failed to retrieve the ball as it bounced agonisingly over the line.

Real, 4-0 up from last week's first leg, were never in danger of suffering what would have been the biggest reversal since European club competition began in 1955 but needed to concentrate fully to keep a lively Spurs team at bay.

The closest Champions League debutants Spurs came to scoring was when Gareth Bale had a first-half goal ruled out because Luka Modric was offside. 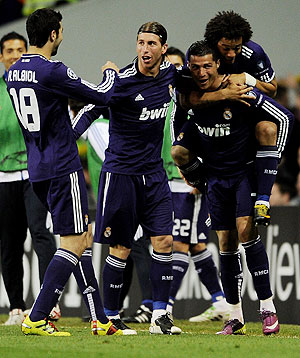 Schalke 04 completed a stunning elimination of Champions League holders Inter Milan with a 2-1 second leg win and 7-3 aggregate victory on Wednesday to set up a semi-final with Manchester United.

Schalke, who crushed Inter 5-2 in Milan last week, dashed any lingering Italian hopes and secured their first last four appearance when Champions League record scorer Raul slotted in on the stroke of halftime for his 71st goal in Europe's top competition.

Inter equalised early in the second half when Brazil-born Italy international Thiago Motta scrambled the ball over the line from close range.

It was Schalke's fourth successive win since Ralf Rangnick took over as coach last month after the Bundesliga club parted ways with Felix Magath.

Inter needed a fast start but their early offensive moves were stifled by Schalke who pressed deep and forced Leonardo's side to chase after the ball.

The home side were content to wait for the quick breaks and Raul went close with a header after a quarter of an hour.

Thiago Motta levelled four minutes after the restart from a Wesley Sneijder corner but defender Hoewedes finished the Inter off with a crisp low shot in the 81st minute.

© Copyright 2022 Reuters Limited. All rights reserved. Republication or redistribution of Reuters content, including by framing or similar means, is expressly prohibited without the prior written consent of Reuters. Reuters shall not be liable for any errors or delays in the content, or for any actions taken in reliance thereon.
Related News: Schalke, Inter Milan, Raul, Thiago Motta, Manchester United
COMMENT
Print this article
Holders Inter Milan grouped with Werder, Spurs 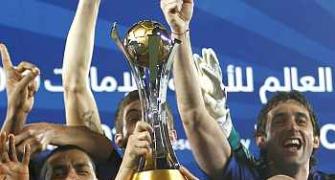 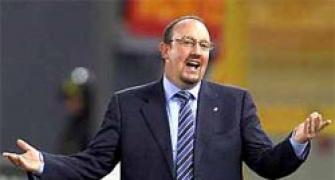 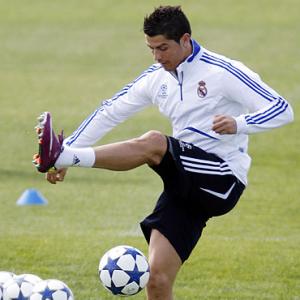