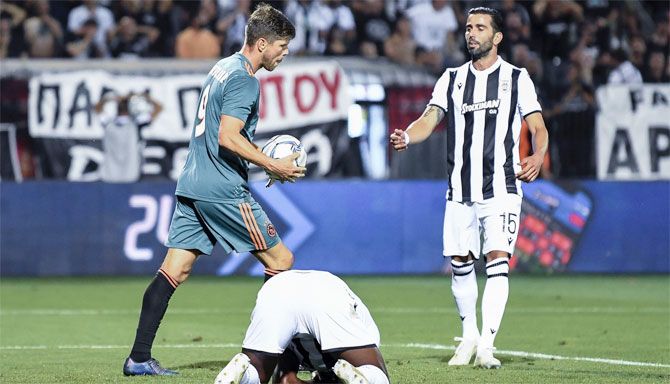 Former European champions Ajax Amsetrdam were held to a 2-2 draw at PAOK in the first leg of their Champions League third qualifying round tie while Red Star Belgrade could only manage a 1-1 home draw against FC Copenhagen on Tuesday.

Azeri champions Qarabag took a big step towards the playoff round with a 2-1 win at Cypriot side APOEL but Dinamo Zagreb left their progress hanging in the balance after the Croats played out a 1-1 home draw against Hungary's Ferencvaros.

A Hans Vaneken penalty late in the first half gave Bruges a 1-0 home win against Dynamo Kiev.

Last season's semi-finalists Ajax, who have won Europe's premier club competition four times, made a perfect start in the cauldron of PAOK's Tumba stadium when Hakim Ziyech curled in a swerving free kick after 10 minutes.

Roared on by a fervent home crowd, PAOK turned the tide before halftime when striker Chuba Akpom capped a flowing move with a fine finish from 10 metres and defender Leo Matos headed home a Diego Biseswar free kick.

Ajax, who suffered a last-gasp defeat by Tottenham Hotspur in last season's semis, piled on the pressure after the break and Ziyech missed a glaring chance before substitute Klaas Jan Huntelaar equalised with a bizarre goal on the hour.

Fernando Varela's poor clearance from Donny van de Beek's cross rebounded off the 35-year old striker's feet into the back of the net from close range and the visitors then dominated until the final whistle.

Red Star, the 1991 champions, conceded a late equaliser after their striker Milan Pavkov reaffirmed his reputation for scoring in big games just before the break, only to be forced off the pitch at halftime by a recurring hamstring injury.

Pavkov, who netted twice in last season's memorable 2-0 home win over eventual Champions League winners Liverpool in the group stage, fired Red Star ahead in the 44th minute when he hooked a loose ball over keeper Sten Michael Grytebust.

Pavkov made way for Richmond Boakye and the hosts were punished in the closing stages for the Ghanaian's forward's second-half profligacy.

Dinamo's Spanish midfielder Dani Olmo fired them ahead with a superb goal in the seventh minute as he took a clever back-heel by Mislav Orsic in his stride, nutmegged a defender and hit the far corner of the net with a crisp shot.

But Ferencvaros levelled against the run of play on the hour when David Siger beat Dominik Livakovic with a looping header after the keeper had parried a shot from 10 metres.

Goals from Mahir Emreli and Magaye Gueye gave Qarabag a 2-0 lead at APOEL before Giorgos Merkis pulled one back for the home sides in the 90th minute.