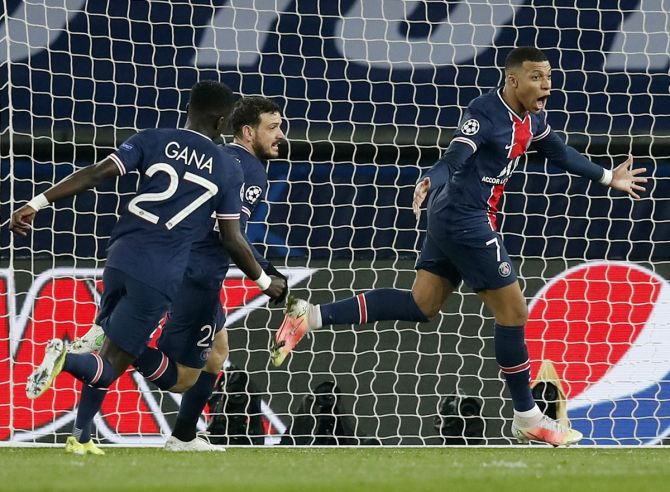 Paris St Germain buried the ghosts of their embarrassing 2017 exit as they drew 1-1 at home with Barcelona on Wednesday to complete a 5-2 aggregate victory that sent them into the Champions League quarter-finals.

Four years after Barca claimed a memorable 6-1 win to overturn a 4-0 first-leg deficit in the last 16, PSG lacked inspiration but their 4-1 advantage from the first game in Spain was sufficient this time.

Kylian Mbappe, who scored a hat-trick at the Nou Camp, opened the scoring with a penalty against the run of play before Lionel Messi levelled with a superb long-range goal, but the Argentine had a spot-kick saved by Keylor Navas on the stroke of halftime.

The French champions were on the back foot in the second half as Barca piled on the pressure but Barca exited the competition before the semi-finals for the second year in a row.

Barca's exit ensured it will be the first time since 2005 that neither Messi nor Cristiano Ronaldo will be in the Champions League quarter-finals after Juventus were also knocked out in the last 16, on Tuesday.

"We suffered a lot in the first half, and psychologically it was a test for us. I gathered that the past was something that was talked about a lot here," PSG coach Mauricio Pochettino said.

"We were better in the second half, we were more competitive." 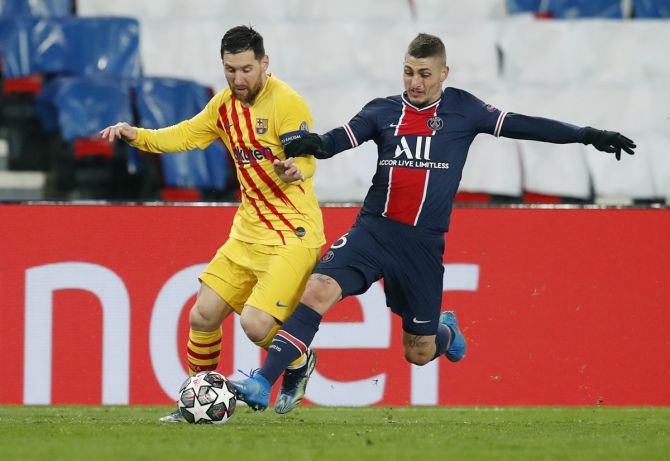 "We are departing this Champions League in a very different manner from the way we did last season. In this game, we hit our level and that's the road we have to follow," said Koeman, referring to the team's 8-2 aggregate defeat in the quarter-finals by Bayern Munich last year.

PSG, without injured forward Neymar, looked nothing like the team who reached last year's final or hammered Barcelona three weeks ago, but they did keep their composure at the back.

Barcelona stamped their authority early on, finding space for Ousmane Dembele, but the Frenchman was twice denied by Navas and he skied an effort over the crossbar in the opening 20 minutes.

Sergino Dest went close for Barca with a powerful angled shot that Navas deflected on to his left-hand post and Dembele broke down the left flank but his cross just evaded a sliding Messi.

It was PSG, however, who went ahead on 31 minutes as Mbappe converted a penalty awarded following a VAR review after Clement Lenglet appeared to step onto Mauro Icardi's heel.

Six minutes later, Messi unleashed a 25-metre missile that flew into the top corner to equalise in style with his 120th goal in the Champions League.

The Argentine had a chance to put the visitors in front just before the break when Barca won a penalty following a Layvin Kurzawa foul on Antoine Griezmann, but Navas deflected the Argentine's spot-kick onto the bar and away.

Barca were still all over PSG in the second half and it took a desperate tackle by Marquinhos to prevent Messi scoring from point blank range before Navas cleared a Sergio Busquets header.

Barcelona gradually ran out of steam, however, and must now turn to their bid to win the La Liga title, where they trail leaders Atletico Madrid by six points.

Salah and Mane fire Liverpool past Leipzig into quarters 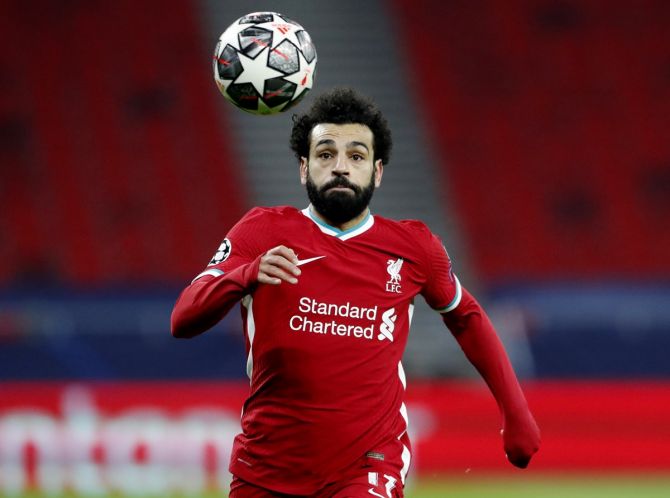 Second-half goals from Mohamed Salah and Sadio Mane eased Liverpool into the quarter-finals of the Champions League with a 2-0 second-leg win over RB Leipzig on Wednesday, to complete a comfortable 4-0 aggregate victory.

Liverpool, leading 2-0 from the first-leg yet struggling in the Premier League after six straight home defeats, had several chances to extend their advantage in the first half but lacked sharpness in front of goal.

Both legs of the last-16 tie were played at the Puskas Arena in the Hungarian capital due to Germany's COVID-19 related travel restrictions.

While it was an unusual 'home' game for Liverpool, there was a more familiar look to the 2019 Champions League winners' lineup with Brazilian Fabinho back in a midfield role.

Mane had an early chance but blasted over from a promising position yet Leipzig knew one goal for them could set the nerves jangling for Juergen Klopp's side. Liverpool keeper Alisson Becker did well to smother a shot from Dani Olmo in the 11th minute while at the other end Diogo Jota saw a header tipped over the bar by Leipzig keeper Peter Gulacsi.

Gulacsi, a former Liverpool player, then did well again to keep out a Salah shot after the Egyptian had been set free by a long ball forward from Thiago Alcantara.

The Germans continued to ask questions though with Emil Forsberg shooting wide from inside the box in the 33rd minute but Liverpool should have had the lead before the break.

Gulacsi parried another Jota effort and then on the stroke of halftime the Portuguese forward wasted a great chance when the ball fell to him at the back post, after poor defending from Dayot Upamecano, but he fired into the side netting.

Liverpool finally broke through in the 70th minute when Jota fed Salah, who cut across the top of the penalty area before drilling into the bottom corner.

Four minutes later, Mane made it 2-0 on the night when he met a Divock Origi cross from the right with a first-time finish, steering the ball home with the outside of his foot.

Klopp was relieved that his team were capable of putting their domestic toils aside in order to make the last eight in Europe and was particularly pleased with the performances of central defenders Ozan Kabak and Nathaniel Phillips.

"We had to press them, force them to play those slightly uncontrolled balls forward. We defended deep together really well which is important. Everybody had a really good game. It was a good performance."