Photos from the Champions League matches played across Europe on Tuesday 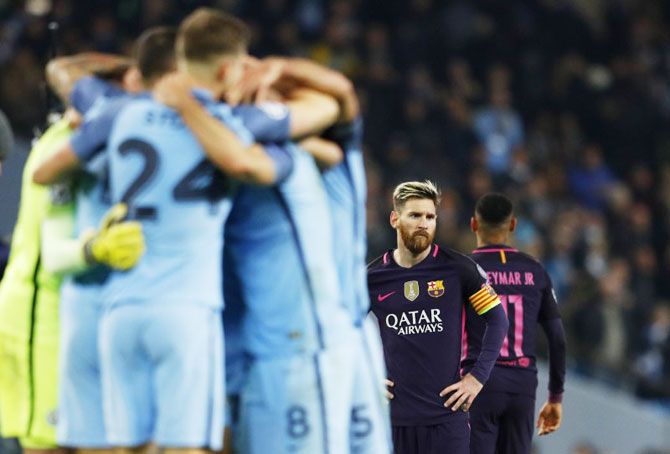 Coach Pep Guardiola was left thrilled after ManchesterCity revived their Champions League bid by beating his old club Barcelona 3-1 in a gloriously open Group C encounter at the Etihad Stadium on Tuesday.

Ilkay Guendogan scored twice and Kevin De Bruyne netted a superb free kick in a magnificent display from the home side that ended Barcelona's 100 percent record and made handsome amends for City's 4-0 drubbing at the Nou Camp two weeks ago.

City's victory looked unlikely when Lionel Messi followed up his hat-trick in the game at the Nou Camp with a dazzling opener on the counter attack in the 21st minute and Barca were in control before Guendogan cashed in on a Sergi Roberto mistake. In a game peppered with fine attacking and dubious defending, City then ran Barca ragged as the exceptional De Bruyne netted in the 51st minute before helping set up Guendogan's second after 74.

City left Barca frustrated as they failed to gain the win that would have sealed their place in the knockout stages for a 13th successive season.

The home side's big night started brightly as Raheem Sterling appeared to be brought down in the box by Samuel Umtiti only to be booked, harshly perhaps, for diving.

Then, in a devastating counter attack initiated by Javier Mascherano when he broke up a City thrust in his own box, Messi found Neymar on the left before marauding down the field to latch on to the Brazilian's pass and claim his 90th Champions League goal.

Barca looked poised to take over, threatening a second goal until Sergi Roberto stroked a pass carelessly across his own defensive line, allowing Sergio Aguero to intercept and feed Sterling who crossed for Guendogan to tap the ball in. A poor touch from Sterling stopped him putting City ahead at the start of the second half but they did not have to wait long to go ahead as De Bruyne's free kick dipped over the wall and beat the despairing dive of Marc-Andre ter Stegen.

De Bruyne came close to adding to the lead as the hosts flooded forward.

Barca should have equalised when a stray back pass from John Stones led to Andre Gomes hitting the bar when it seemed easier to score.

City, though, earned reward for their domination and some wayward defending by the visitors when De Bruyne's pass cut them apart and set up Jesus Navas to whip in the cross that eventually fell to Germany midfielder Guendogan who hammered his fourth goal in two games. Eindhoven: Two goals from Robert Lewandowski allowed Bayern Munich to make sure of progress to the knockout phase of the Champions League as they came from a goal down to beat PSV Eindhoven 2-1 away on Tuesday in their Group D clash at the Philips Stadium.

Lewandowski twice struck the woodwork before equalising from the penalty spot and then steering home a superb 73rd-minute winner as Bayern advanced to nine points, second in the group standings with two rounds to play.

Atletico Madrid top the standings on 12 points with Russian club Rostov and PSV both on one point from four matches.

The Polish international turned home a square ball from David Alaba for the winner, showing a deft touch and superb skill to steer the ball into the net. Alaba had made a defence-splitting run to set up the chance.

Lewandowski had tucked away Bayern’s first goal after 34 minutes from the penalty spot after a handball by PSV midfielder Andres Guardado.

The home side, who needed to win to keep alive slim hopes of repeating last year’s feat of reaching the last 16, were controversially ahead after 14 minutes. Television replays showed defender Santiago Arias to be offside as he reacted quickest to Manfred Neuer’s parry from a Davy Proper close-in header. But the linesman’s flag stayed down to the delight of the home fans, hoping their side would be able to turn the tables on a Bayern team who easily beat PSV 4-1 in Munich a fortnight ago.

There were frequent reminders of the class of the Germans, starting as early as the opening two minutes when Thomas Muller’s header went narrowly wide.

Lewandowski hit the crossbar with a header in the fourth minute and struck the woodwork again on the half hour and again in the final five minutes, turning the PSV defence with a swivel move reminiscent of the Dutch great Denis Bergkamp.

PSV will now set their sights on the Europa League but will need to beat Rostov to third place in the group. 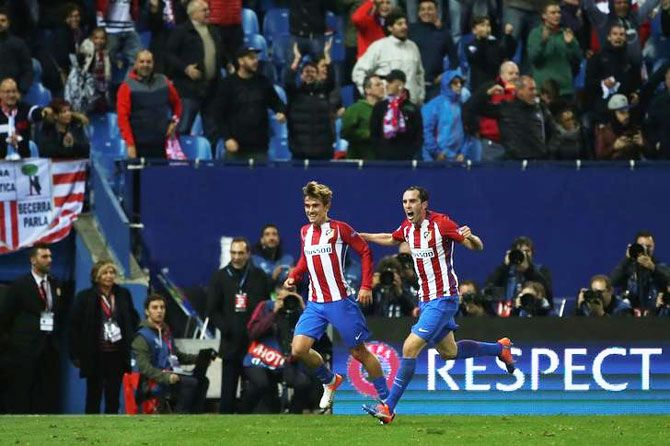 Madrid: Antoine Griezmann struck two goals, one in the 93rd minute, to give Atletico Madrid a 2-1 Group D win over Rostov on Tuesday that took them into the Champions League last 16 and preserved their 100 percent record.

Griezmann joined Atletico's top 10 scorers in European competition by putting the home side ahead in the 28th minute with an improvised volley.

Sardar Azmoun levelled barely two minutes later, becoming the first player to score against Diego Simeone's side in the competition this season.

Atletico's passage to the last 16 was guaranteed nonetheless by Bayern Munich's 2-1 win at PSV Eindhoven but Griezmann beat the offside trap in the dying seconds to ensure last year's runners-up held on to their perfect record.

Atletico top Group D on 12 points, Bayern are second on nine, while Rostov and PSV, with a point each, will compete for third place and a spot in the Europa League.

Simeone gave a debut to Croatian defender Sime Vrsaljko but otherwise opted for a familiar starting 11 in the return game with Rostov after snatching a 1-0 win in Russia a fortnight ago.

Rostov's five-man defence managed to frustrate Atletico for the majority of the game and the Spanish side's opener came from a moment of brilliance from Griezmann, who was on a run of five games without a goal for club or country going into the fixture.

Yannick Carrasco collected the ball from Filipe Luis after a corner looked to have gone to waste and his chipped pass found its way to Griezmann via a weak header from Rostov's Azmoun. The Frenchman, with his back to goal, reacted quickly to hook the ball in on the volley.

Azmoun promptly made amends at the other end though, receiving a pass from Dmitry Poloz as Atletico were caught on the break and slipping the ball past Jan Oblak.

Atletico laid siege to the Rostov goal after the break but were repeatedly frustrated by goalkeeper Soslan Dzhanayev, who turned away efforts from Griezmann, Diego Godin, Carrasco and Kevin Gameiro.

Griezmann initially did not celebrate his last-gasp winner, believing he was offside, but peeled away in joy as the linesman kept his flag down, correctly ruling that the previous touch had come from a Rostov player. Sofia: Mesut Ozil scored a superb late winner as Arsenal hit back from two goals down to beat Ludogorets 3-2 on Tuesday and secure their place in the last 16 of the Champions League with two games to spare.

The North London club, who reached the competition’s knockout stages for a 17th time in a row, and Paris St Germain, who also qualified after a 2-1 away win over Basel, are joint top in Group A with 10 points from four matches. Ludogorets and Basel have one point each.

Unmarked Brazilian Jonathan Cafu opened the scoring for Ludogorets from close range with his second goal in the Champions League, giving Arsenal keeper David Ospina no chance from a precise Wanderson free kick.

Granit Xhaka, who returned to Arsenal's starting line-up after serving a domestic ban, reduced the deficit midway through the first half with Ozil turning provider.

French striker Olivier Giroud made it 2-2 three minutes before the break after getting to the ball ahead of keeper Milan Borjan from Aaron Ramsey’s cross and flicked home a header.

Ludogorets almost restored their lead in the second half but Ospina did well to parry Wanderson’s shots on two occasions. However, Ozil, who scored a hat-trick in Arsenal's 6-0 win over Ludogorets two weeks ago, had the final word.

Ozil collected the ball in Ludogorets's half, lifted it over an advancing Borjan before slipping past two defenders and calmly slotting into an empty net.

"I have already stated that Ludogorets are a very good side," Arsenal manager Arsene Wenger said. 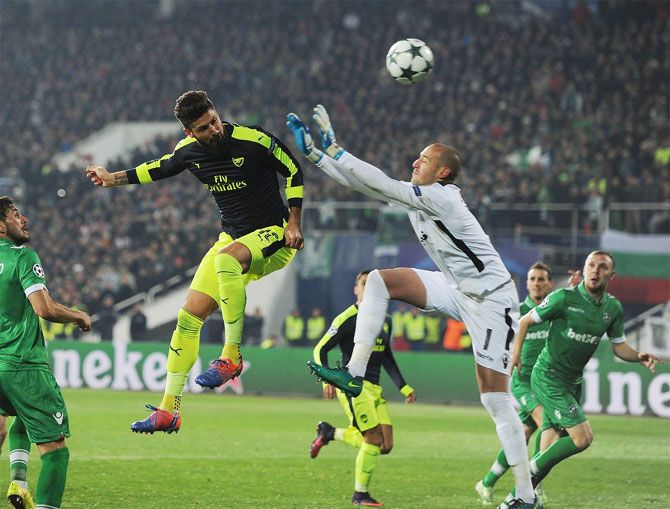 "I was delighted that we managed to level before half time.

"Now we play Paris (St Germain) at home and we have a chance to finish top."

"It is great to be back after long absence," said Ramsey.

"It's important to keep the momentum going, we are looking forward to the derby."

Ludogorets have to play their European home matches in Bulgarian capital Sofia because their 8,800-capacity Ludogorets Arena, in the small northeastern town of Razgrad, is not suitable to host such games.

Ludogorets host Basel in their next game in a battle for the third spot in the group, which guarantees a place in the Europa League.

"We lost but with our heads up high," said Cafu. "We want to win our next game against Basel and finish third."

© Copyright 2021 Reuters Limited. All rights reserved. Republication or redistribution of Reuters content, including by framing or similar means, is expressly prohibited without the prior written consent of Reuters. Reuters shall not be liable for any errors or delays in the content, or for any actions taken in reliance thereon.
Related News: Rostov, Antoine Griezmann, PSV Eindhoven, Basel, Bayern
COMMENT
Print this article 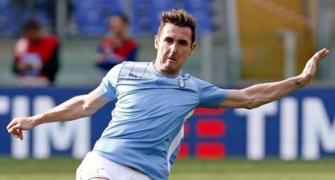 Replace Dhoni as ODI skipper at your own peril, warns Gary Kirsten 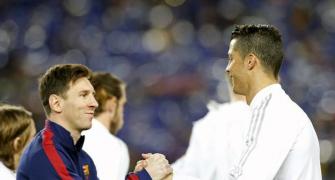 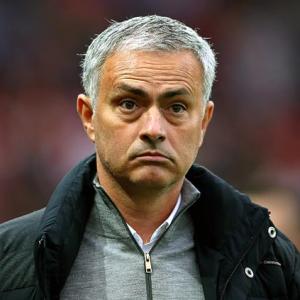 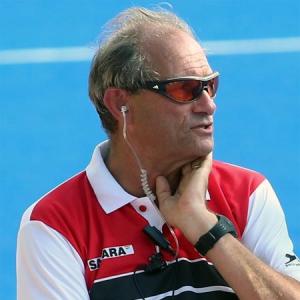