Barcelona, who were held goalless by Benfica, face a daunting task in the last group match when they travel to Germany to take on Bayern Munich, who have a perfect winning record so far.

Images from the UEFA Champions League matches on Tuesday night. 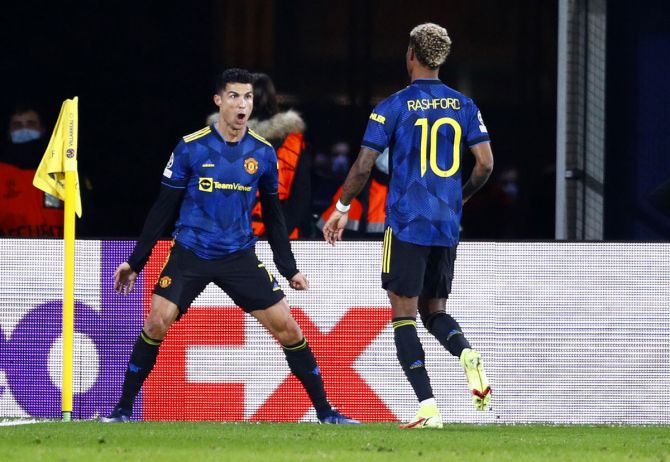 Late goals from Cristiano Ronaldo and Jadon Sancho were enough to earn an underwhelming Manchester United a 2-0 victory at Villarreal on Tuesday that guarantees them a spot in the Champions League knockout stages.

United came into the contest knowing victory would see them through to the last 16 with one group match left to play, but in Michael Carrick's first game as interim manager, United looked shorn of ideas in attack in the Estadio de la Ceramica.

The home side had much the better chances, with United goalkeeper David de Gea bailing his team out with several fine saves, the best of which denied Manu Trigueros a goal.

Out of nowhere, however, a poor pass from Villarreal keeper Geronimo Rulli that was miscontrolled by Etienne Capoue was then seized upon by Ronaldo, who lofted the ball over the stranded Rulli to give United the lead in the 78th minute.

Ronaldo's goals have been crucial for United in Europe this season. He scored late winners against Atalanta and Villarreal in the reverse fixture, while also netting a leveller in stoppage time at Atalanta in the last match.

The Portuguese forward got more than a helping hand for this important strike, but his finish was clinical. He also played a role in the second and clinching goal, laying the ball into substitute Bruno Fernandes, who fed Sancho to put the result beyond doubt. 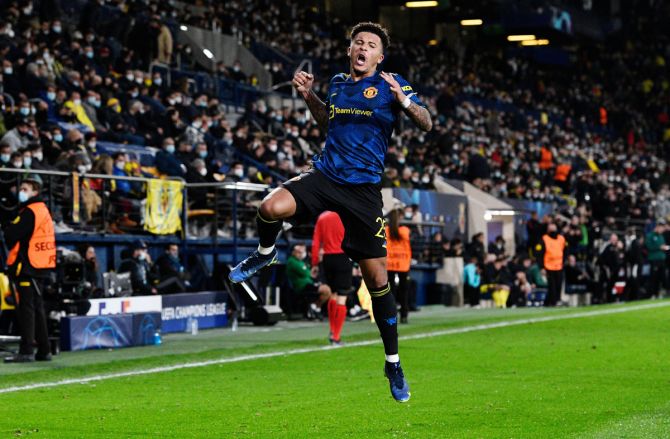 The performance may have been disappointing, but United got the job done, moving top of Group F with 10 points, three ahead of Villarreal, who can no longer catch Carrick's side due to their inferior head-to-head record.

"It's massive for our season," United captain Harry Maguire told BT Sport. "The last couple of months have been nowhere near good enough. We needed the result for our season and for our fans – we know how tough it’s been for them in recent weeks. We have to make sure this is just the start.”

With the travelling United fans singing the name of the man Carrick replaced – Ole Gunnar Solskjaer – in the first half, there was little other action of note to get them too excited.

A Ronaldo header, straight at the goalkeeper, was United's only shot on target in the half, with De Gea forced into two good saves to deny Trigueros and Yeremi Pino down the other end.

As United continued to sit back, Trigueros forced an even better save from De Gea at the start of the second half, with Villarreal sensing a beleaguered United might be there for the taking.

It took until the 72nd minute for United to put together a real attack of note with Sancho denied by a smart save, before the home goalkeeper's error changed the course of the match.

"It's a similar feeling to the Old Trafford game," Trigueros said. "Their goalkeeper was in great form again.

"They’ve got a load of good players and if you give gifts away at the back they’ll punish you. Ronaldo creates goals from nothing and we made it easy to him. We played well, but once again we lost."

Sancho picked an opportune moment to score his first of the season in all competitions, hammering the ball in off the underside of the crossbar to seal an important victory for the visitors in an otherwise disappointing season. 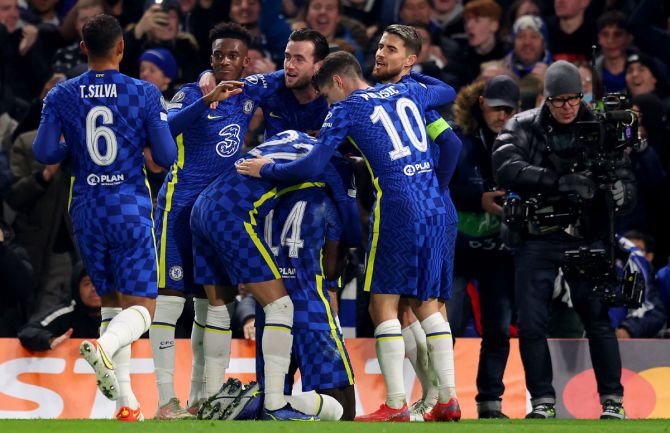 Chelsea claimed a thumping 4-0 victory over Juventus thanks to goals from home-grown trio Trevoh Chalobah, Reece James and Callum Hudson-Odoi and a fourth by Timo Werner to top Champions League Group H and cruise into the knockout stage.

European champions Chelsea took control from the outset and never relaxed as they booked their place in the last 16.

Defender Chalobah, 22, smacked the ball into the net past the flailing arms of Wojciech Szczesny in the 25th minute after centre back Toni Rudiger set him up from a Hakim Ziyech corner.

A VAR check dismissed calls for handball against Rudiger when replays showed the ball hit his hand in front of his chest.

James, 21, showed superb technique to angle a shot into the left hand corner of the goal in the 55th and barely three minutes later 21-year-old Hudson-Odoi scored from a layoff by another Academy graduate Ruben Loftus-Cheek.

Juventus had already qualified for the knockout stage but the result dropped them to second place in the group, level with Chelsea on 12 points, with one round of fixtures to play.

Chelsea coach Thomas Tuchel was full of praise for his young scorers.

"It’s their biggest dream to perform at Stamford Bridge, to perform in blue, to be part of a strong Chelsea team," the German said. "I strongly believe this is a huge part of the success that we have this mix." 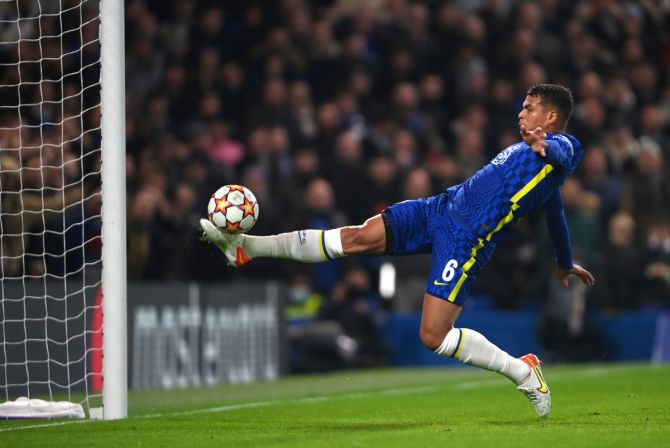 Werner put the icing on the cake before the final whistle by sending the ball home from a Ziyech cross.

Chelsea, beaten 1-0 in Turin in September, made the Italians look ordinary, running them ragged with intricate passing movements and producing 20 shots on goal to Juve's eight.

Former Chelsea striker Alvaro Morata had the visitors' best chance when he chipped the ball over advancing Chelsea keeper Edouard Mendy in the 28th minute, but 37-year-old defender Thiago Silva raced back to superbly hook the ball off the line.

Mendy pulled off a save of his own late in the second half, tipping the ball over the bar from a Weston McKennie shot.

Szczesny saved Juventus from utter humiliation with a series of fine stops, pushing the ball round the post from efforts by Hudson-Odoi and James as well as keeping out Ziyech and Ben Chilwell.

The one downside for the hosts was an injury to wing-back Chilwell, who appeared to twist his knee and was helped off the pitch. 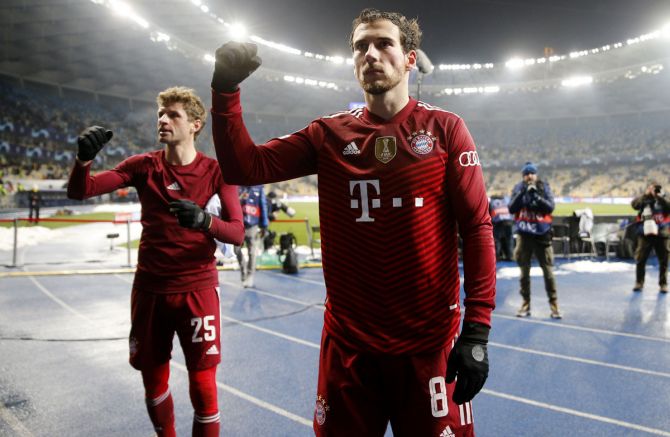 Bayern Munich, missing half a dozen players to COVID-19 quarantine, edged past Dynamo Kyiv 2-1 on Tuesday to secure top spot in Champions League Group E with a game to spare.

First-half goals from striker Robert Lewandowski, who struck with a spectacular 14th-minute overhead kick, and Kingsley Coman three minutes from halftime and amid heavy snowfall, put the German champions in front.

Dynamo, who are now eliminated from the competition, cut the deficit with their maiden group-stage goal through Denys Garmash in the 70th minute.

They then forced Bayern keeper Manuel Neuer to make a fine save in the 75th and hit the post in stoppage time as they looked for an equaliser with a strong finish.

The Bavarians, desperate to bounce back from Friday's shock 2-1 loss to Augsburg in the Bundesliga, top the group on 15 points with five wins from five games. They are also unbeaten in a record-extending 21 consecutive Champions League away games.

Barcelona, who face Benfica later, are in second place on six points and the Portuguese side are third on four, with Dynamo bottom on one point.

"It was maybe not our best performance but overall we are satisfied with the Champions League so far with five wins for five games and 15 points," Neuer said.

"It was important to focus on the task today and put all the other issues aside," he added, referring to an ongoing debate over the vaccination of players.

"But that is not that easy when you have a different squad with players who would normally not start."

Bayern coach Julian Nagelsmann's options were extremely limited with only four outfield players on the bench but Lewandowski, who has now scored in each of his last nine Champions League appearances, struck with the first chance of the game.

A cross into the box bounced awkwardly off a Dynamo defender, and the Polish striker connected with an acrobatic bicycle kick.

The hosts almost scored an equaliser when Neuer attempted to clear a ball in the box but miskicked, sending it bouncing onto the post and wide.

Instead, Coman doubled their lead three minutes before halftime, drilling in from a Corentin Tolisso cross that Lewandowski let slip through his legs.

Neuer made amends for his earlier mistake with a double save to stop Mykola Shaparenko two minutes after the restart to protect their two-goal lead, but he was beaten when Garmash slotted the ball through the keeper's legs for 2-1.

Dynamo were the stronger side in the closing minutes and kept Neuer busy before Viktor Tsygankov struck the post with a long range effort in stoppage time. 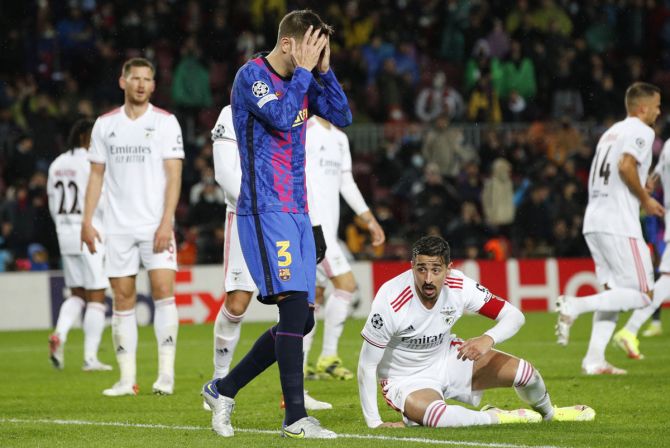 Benfica held Barcelona to a scoreless draw in the Champions League at the Camp Nou on Tuesday night, meaning the second team to qualify for the Round of 16 from Group E behind Bayern Munich will be decided in the final game of the group stage.

Barca are two points ahead of Benfica with one game still to play, but they face a daunting task in the last group match when they travel to Germany to take on Bayern, who have a perfect winning record so far. Benfica, meanwhile, host winless Dinamo Kyiv at home in Lisbon in their final game.

Benfica's manager had said on Monday that "a draw would be worse for Barcelona" and he was true to his word. Benfica defended stoically, closing down attacks with a solid five-man defensive line, leaving Barcelona in control of the ball much of the time - but far away from their goal.

For Barca, however, the match was another disappointing struggle, and they now have just two goals to their name in five games in the group stage of the competition.

Barca defender Ronald Araujo put it simply to reporters afterwards: "We had a great game, the attitude was good, we defended well - it was only the goal that was missing. We still have the last game. It’s complicated but not impossible against Bayern."

Barcelona’s first challenge of the day showed up hours before the game, when a storm hit the city, bringing heavy rain with it, but that didn't put off 49,572 fans from making it to the Camp Nou.

While new manager Xavi appeared to have quickly fixed many issues like the team’s intensity, rhythm, ball control and collective effort, scoring remains a problem.

Barca had 61% of the ball but created only a few chances, including a shot across goal from Yusuf Demir in the first half, a header from Frenkie de Jong after the break, and a volley from Araujo that went in only to be disallowed because he was in an offside position.

Benfica had their opportunities too, but Barca keeper Marc Andre ter Stegen kept out a header from Roman Yaremchuk, while Haris Seferovic failed to score what looked like the winner when through on goal in a stoppage-time counterattack, infuriating his coach.

"In my 30 years as a coach, I have never seen a player miss an opportunity like this. Unfortunately, it happened to us," Jorge Jesus told reporters.

© Copyright 2021 Reuters Limited. All rights reserved. Republication or redistribution of Reuters content, including by framing or similar means, is expressly prohibited without the prior written consent of Reuters. Reuters shall not be liable for any errors or delays in the content, or for any actions taken in reliance thereon.
Related News: Chelsea, Dynamo Kyiv, Manchester United, Villarreal, Bayern Munich
COMMENT
Print this article 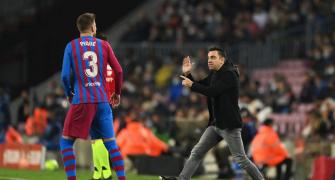 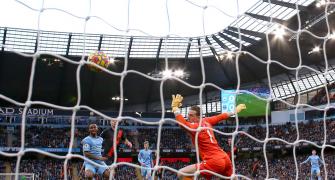 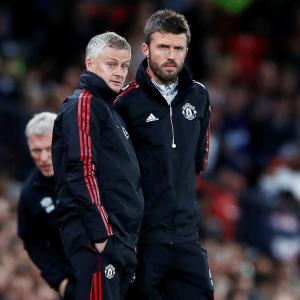 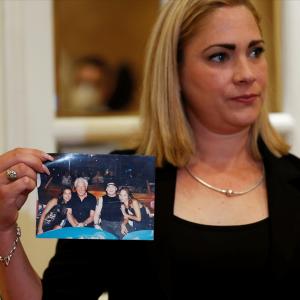