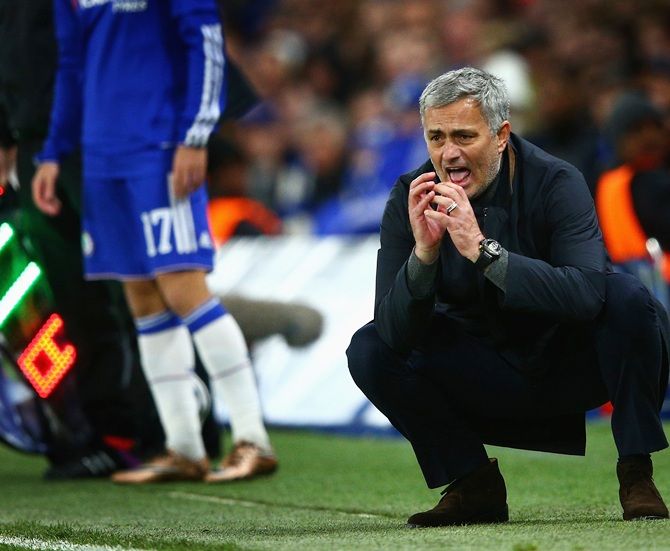 A 12th-minute own goal which rebounded off Ivan Marcano under pressure from Diego Costa and a well-worked second-half strike from Brazilian Willian ensured victory for the struggling English champions and sent Porto into the Europa League.

Chelsea, cheered by a beaming owner Roman Abramovich, looked a completely different team from the one that has slumped to eight domestic defeats in 15 league games, including four at home.

The result took the pressure off Mourinho after intense speculation that the coach, who has won the Champions League with both Porto and Inter Milan, might lose his job if Chelsea failed to qualify for the knockout stages.

Saturday's 1-0 capitulation at home to promoted Bournemouth and Wednesday's lively and assured performance at the same ground were a Jekyll and Hyde transformation.

Chelsea looked composed from the start and when Belgian forward Eden Hazard served Costa a perfectly-weighted pass in the 12th minute, Iker Casillas in the Porto goal could only parry the Spain striker's shot.

The ball rebounded off Porto defender Marcano and into the goal. 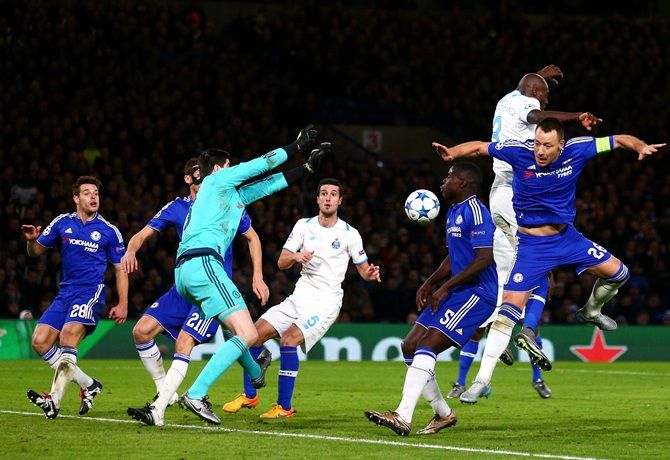 Chelsea began to play with more freedom and it paid off when a speedy passing move between Costa and Hazard in the 52nd minute found Brazilian Willian, who cracked a shot inside the near post beyond the diving Casillas.

With Dynamo Kiev winning in the group's other game, Porto needed to attack and Thibaut Courtois had to keep out strikes from Yacine Brahimi and Cristian Tello.

A relieved crowd celebrated a possible turning point in a turbulent season by chanting Mourinho's name.

Mourinho's future has been the subject of speculation after his team, so masterly last season, slumped to 14th in the Premier league and look unlikely to reach the top four and a Champions League place for next season.

But the players showed their old passing precision and defensive solidity to tame a Porto side who have lost only one game this season -- to Dynamo Kiev in the Champions League last month.

The Portuguese team tested Courtois but the keeper and his defence held firm in a way they have failed to do in the Premier League.

Chelsea grew in stature as time ran out for the Portuguese, who looked short of the form they showed when they beat the London side 2-1 in Portugal in September.

Costa, top scorer last season but serially embroiled in controversy this season, earned a yellow card for stepping on Casillas early in the first half.

But he then proved a constant threat, testing Porto’s experienced Spanish goalkeeper to re-ignite a rivalry dating from their time at opposing Madrid sides Real and Atletico.

Oscar had a clipped shot expertly saved by Casillas and Hazard hit the post with 10 minutes to go as Chelsea sought a third goal. 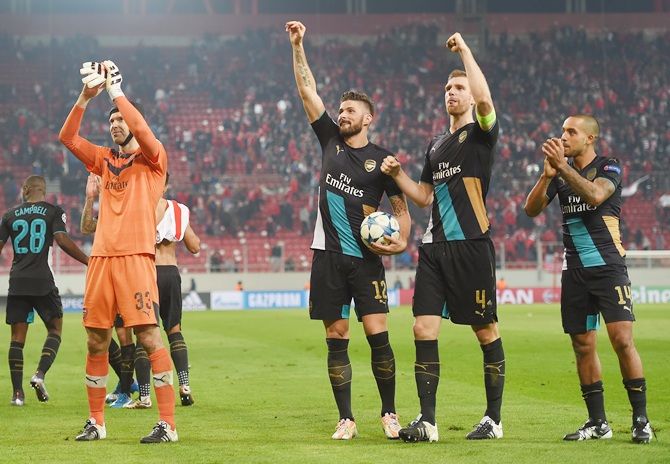 Olivier Giroud grabbed a superb hat-trick as Arsenal crushed Olympiakos Piraeus 3-0 to book their spot in the Champions League's last 16 with a classy demolition job that ended the hopes of their Greek opponents on Wednesday.

With Arsenal needing an emphatic victory to make it out of Group F, France forward Giroud produced a high-calibre display to ensure the English club finished second, level on nine points with Olympiakos, but ahead by virtue of their better head-to-head record.

Giroud opened the scoring in Greece with a powerful header in the first half, doubled Arsenal's advantage with a calm left-footed finish quickly after the restart and rounded off a superb individual display with a penalty.

The victory completed a remarkable turnaround in fortunes for Arsenal who lost three of their first four games of the campaign and needed to win by any result other than 1-0 or 2-1 in their decisive group clash to finish second behind group winners Bayern Munich.

"I told you before that it would be the greatest escape," Arsenal manager Arsene Wenger said.

"I must say I'm very proud of the team as we had to be right on the mental and tactical side."

In what was a straight shootout for the second spot in the group at the Georgios Karaiskakis stadium, Giroud opened the scoring with a stooping header from Aaron Ramsey’s cross just before the half-hour.

Olympiakos responded to going behind positively, however, and finished the first half stronger. Felipe Pardo’s cross was deflected over by Laurent Koscielny and Arthur Masuaku tested Arsenal keeper Petr Cech with a long-range drive.

Arsenal grabbed the vital second goal shortly after the restart as Giroud benefitted from Joel Campbell’s trickery to latch onto the Costa Rica forward’s neat pass and side-foot past Olympiakos keeper Roberto four minutes after halftime.

While Arsenal controlled possession, they looked vulnerable at times on the break and the hosts almost hit back immediately.

An unmarked Manuel Da Costa headed a corner straight at Cech, who shortly afterwards made a superb flying save to deny the impressive Kostas Fortounis.

Any hope of a comeback from the hosts though was extinguished when Italian referee Nicola Rizzoli awarded a penalty against Omar Elabdellaoui for handling Nacho Monreal’s shot, with Giroud sending Roberto the wrong way from the spot.

The win preserved Arsenal’s superb record in the Champions League, having now qualified for the competition's second stage for the 16th time in succession.

“We were eliminated simply because Arsenal were better; they showed their level tonight and we just couldn’t make it despite a massive effort,” said the 38-year-old, whose side will now play in the continent's second tier Europa League.

“Our fans should be proud though... the team gave all they had and it’s significant that we were in with a chance of qualifying for the second stage in the last round of group matches.” 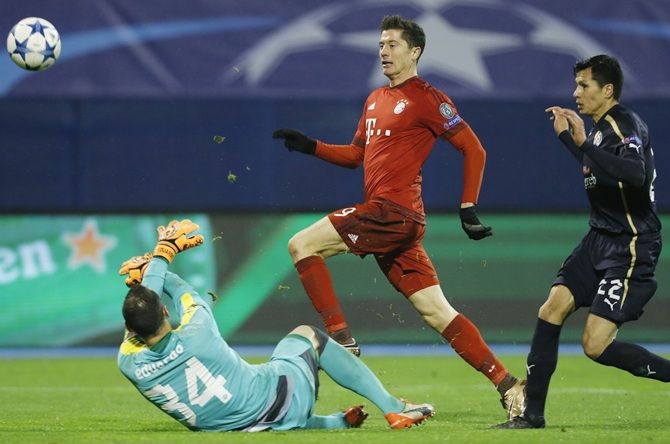 Bayern Munich eased into the Champions League's last 16 after a second-half double by top scorer Robert Lewandowski gave them a 2-0 win at Dinamo Zagreb in their Group F match on Wednesday.

Bayern, who had already secured top spot in the group, finished with 15 points from six games, six ahead of Arsenal, who booked their berth with a 3-0 win at Olympiakos Piraeus.

After a tepid first half, Bayern coach Pep Guardiola brought on Thomas Mueller into his makeshift side at the interval and Germany's 2014 World Cup winner made a telling impact despite missing a 90th-minute penalty.

Mueller's perfect cross allowed Lewandowski to break the deadlock with a diving header on the hour and the Poland striker added the second with a dinked finish three minutes later.

Five times European champions Bayern dominated from the start but Dinamo missed the best two chances in the first half on a chilly night in Zagreb.

The lively Coric also tested Ulreich early on, before Lewandowski's scuffed shot from a good position was easily cleared by the home team's defenders at the other end.

Ulreich then kept out a stinging shot by Junior Fernandes before Lewandowski opened the scoring thanks to good work by Mueller, who replaced the ineffective Franck Ribery.

The irrepressible Lewandowski showed his class when he made it 2-0 with an exquisite finish after racing clear of a defender and leaving Dinamo keeper Eduardo clutching at thin air, taking his Champions League tally this season to seven goals from six games.

Mueller then forced Eduardo to save at full stretch with a ferocious volley before hitting the post with a penalty after Dinamo's keeper fouled second-half substitute Arturo Vidal.

Neville suffers as Valencia crash out Gary Neville endured a dispiriting start to life as a head coach when the former England defender's Valencia side lost 2-0 at home to Olympique Lyonnais on Wednesday to exit the Champions League.

Maxwell Cornet put Lyon in front eight minutes before the break and Alexandre Lacazette sealed all three points for the French side in the 76th minute with a solo breakaway effort.

Gent’s 2-1 win over Group H leaders Zenit St Petersburg meant even a win would not have been enough for Valencia to advance to the last 16.

Neville and his team will drop into the Europa League, where they will join the Englishman’s former club Manchester United.

Neville, who replaced Nuno Espirito Santo as coach at the Mestalla, spent much of the game on the edge of his technical area, following the game intently and issuing instructions via hand signals.

Valencia twice threatened from set-pieces when Shkodran Mustafi steered Rodrigo de Paul’s corner on to Anthony Lopes’s right post before the German hit the back of the net, only for the effort to be ruled out for an infringement in the build-up.

Valencia goalkeeper Jaume Domenech denied Cornet and Corentin Tolisso while Lopes had to be alert to keep out Paco Alcacer’s header following fine work by Dani Parejo and Jose Gaya.

Cornet gave Lyon the lead after forcing Gaya on to his heels before firing a curling left-foot strike that looped into the top corner having taken the slightest of deflections.

With Valencia pushing for the equaliser there was always the risk of a counter-attack and, with 14 minutes remaining, Lacazette held off Aymen Abdennour before sliding the ball beyond Domenech.