Milan's Cassano out for months, to have surgery

Italy and AC Milan forward Antonio Cassano will be out for a "few months" and needs heart surgery after falling ill at the weekend, the Italian champions said on Wednesday.

"The player will undergo a small surgical cardiological intervention in the coming days and the recovery time will be better defined after the surgery, but it will probably be a few months," Milan said in a statement.

The problem caused insufficient blood flow to the brain, causing "ischemic cerebral damage" but no lasting brain damage has been detected. 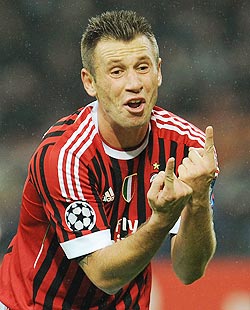 The former Real Madrid striker, who recently said that football had left him exhausted and he would quit in 2014, fell ill after returning by air from Rome after Saturday's 3-2 win over AS Roma.

The statement said the 29-year-old is already feeling much better after reports he initially had difficulty talking and moving.

His team-mates unveiled a shirt bearing his name after scoring in Tuesday's 1-1 draw at BATE Borisov which helped take Milan into the Champions League.

Cassano, born in Bari, has had a colourful career marked by tantrums and personality clashes but his early immaturities looked to have been ironed out when he joined Sampdoria from Real in 2007.

However, a verbal spat with the Samp president led to him being suspended last year and he joined Milan in January.

Milan boast Zlatan Ibrahimovic, Alexandre Pato and Robinho among their forwards but may now be forced to recruit another striker in January should Cassano be ruled out for several months.