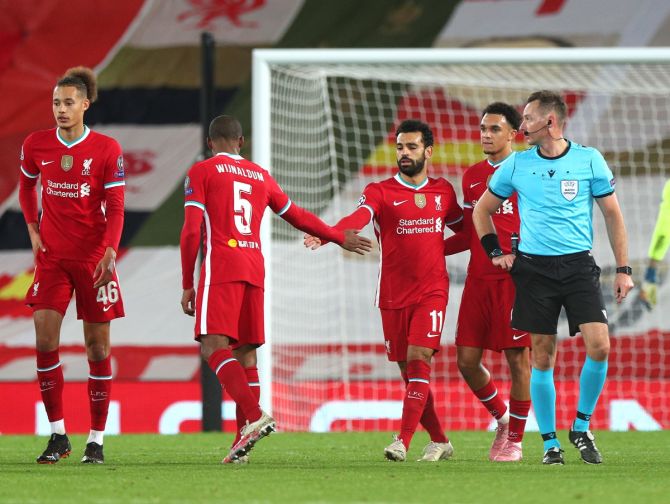 Liverpool laboured to a 2-0 win over Denmark’s Midtjylland on Tuesday as a goal from Diogo Jota and a Mohamed Salah penalty secured a hard-fought Champions League Group D victory at Anfield.

The win came at a cost, however, as Liverpool manager Juergen Klopp suffered another defensive blow with Brazilian Fabinho limping off in the first half with what appeared to be a hamstring injury.

Fabinho had been deputising for central defender Virgil van Dijk, who is out with a long-term knee injury, and he was replaced by 19-year-old Rhys Williams.

“It is exactly the last thing we needed,” said Klopp, who added that the seriousness of the injury would not be known until after a scan and praised Williams for the composed way in which he coped with being thrown into the game.

Liverpool made a slow start and suffered an early scare when Anders Dreyer broke through the middle but shot straight at keeper Alisson.

With Klopp having rested his usual front three and given starts to Jota, Divock Origi and Xherdan Shaqiri, Liverpool struggled to break down the determined Danes.

The breakthrough came in the 55th minute when after a swift exchange with Shaqiri, Trent Alexander-Arnold crossed low to Jota who had a simple tap-in.

The goal was Liverpool’s 10,000th in all competitions.

Substitute Roberto Firmino should have settled the contest near the end, but blasted over the bar after more good work from Alexander-Arnold.

Then Dreyer had the best chance of the game when he jinked into space in the Liverpool box but, with Alisson to beat, he could only find the side-netting.

Salah made sure of the win, in stoppage time, from the penalty spot, converting after he had been brought down by Paulinho inside the box.

Liverpool have the maximum six points from their opening two games while Midtjylland are yet to get off the mark. 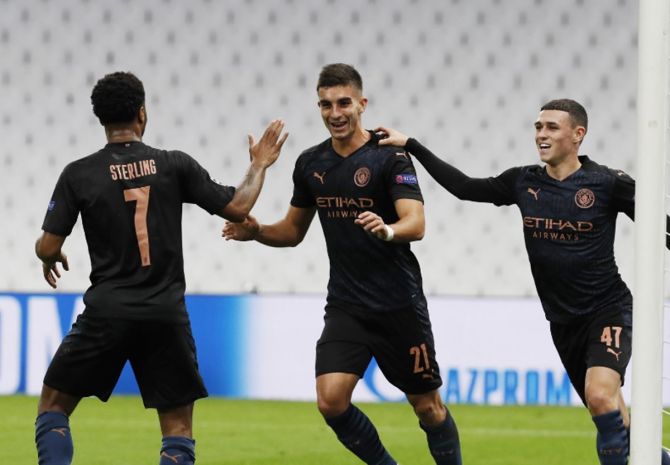 IMAGE: Ferran Torres, Ilkay Gundogan and Raheem Sterling found the back of the net as Pep Guardiola’s side stayed top of the standings. Photograph: Reuters

Manchester City were barely troubled as they claimed their second victory in Champions League Group C by beating Olympique de Marseille 3-0 at the Stade Velodrome on Tuesday.

Ferran Torres, Ilkay Gundogan and Raheem Sterling found the back of the net as Pep Guardiola’s side stayed top of the standings on six points, three ahead of Porto and Olympiakos.

Marseille are bottom of the table on zero points after their 10th consecutive loss in the competition since two defeats in the quarter-finals against Bayern Munich in 2012 and after six defeats in the group stage in 2013-14, in their last appearance.

OM, who lost 1-0 at Olympiakos on their return to the Champions League after a seven-year hiatus, travel to Porto and City host Olympiakos in the next round of matches on Nov. 3.

Guardiola was delighted with his side. “We didn’t concede much, hardly anything,” he said. “We were absolutely under control. We were patient, we were so aggressive without the ball... we played really well.”

“It’s true that it’s a defeat that is hard to take,” said OM midfielder Florian Thauvin. “We knew that they’d have control of the ball and we decided to sit deep and play on the counter.

“Unfortunately, we didn’t put into place what we wanted to. It’s a different level and we have to be honest about that.”

After their 3-1 home win against Porto last week, City got off to a dominant start, pushing Marseille back and winning three corners in the opening 10 minutes.

Marseille were shambolic at the back and paid for it in the 18th minute when Valentin Rongier inexplicably passed the ball to Kevin De Bruyne on the edge of the box, with Torres burying it in the net after being set up by the Belgian.

Oleksandr Zinchenko came close to making it 2-0 when his crossed shot shaved Steve Mandanda’s left-hand post after another piece of horrible defending from the hosts.

Marseille were a bit more lively after the break, defending higher up, and Thauvin came close in the 55th, only for his 25-metre missile to be tipped on to the post by Ederson.

City finally made their superiority count after 76 minutes as Gundogan struck home after Sterling’s fluffed header from Phil Foden’s cross came his way at the far post.

Sterling wrapped it up five minutes later, tapping the ball home from De Bruyne’s cross at the end of a long spell of possession. 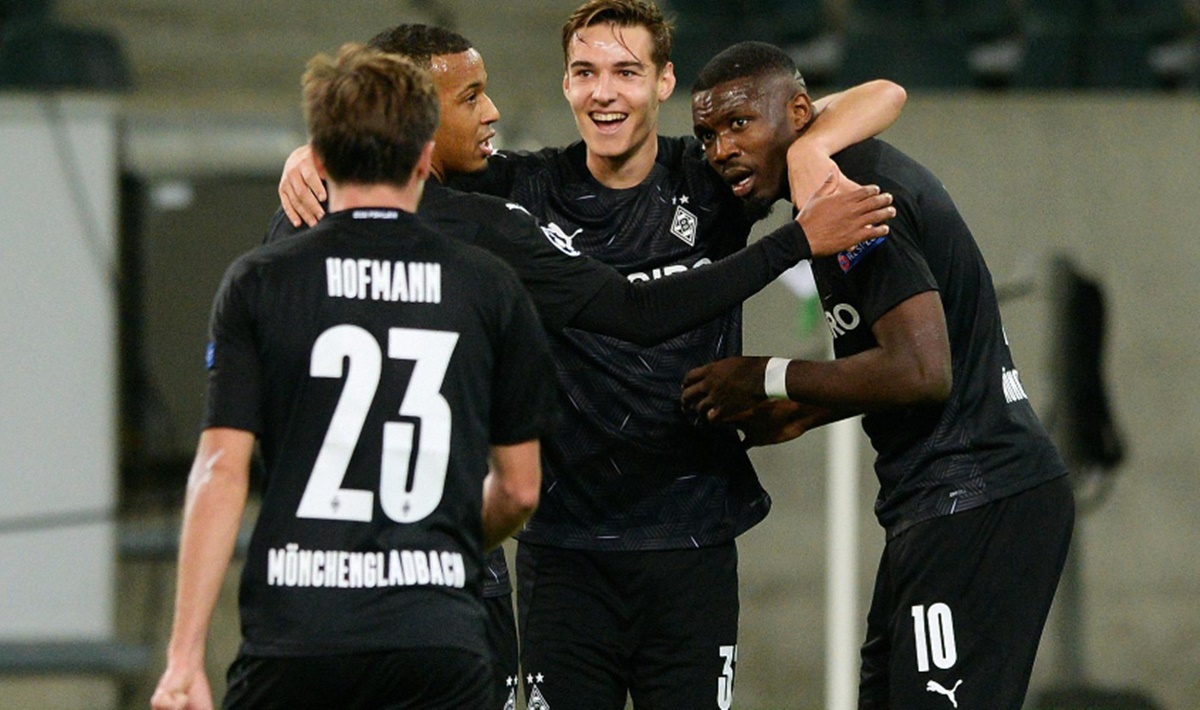 Real Madrid scored two goals in the final minutes with Karim Benzema and Casemiro to rescue a 2-2 draw at Borussia Moenchengladbach in their Champions League Group B match on Tuesday and snap a three-game losing run in the competition.

Marcus Thuram fired in for the lead in the 33rd minute and tapped in on the rebound in the 58th before Benzema cut the deficit in the 87th minute and Casemiro bagged a stoppage-time equaliser.

The 13-time European champions, who had lost their previous three games including a 3-2 defeat by Shakhtar Donetsk last week, earned their first point in the competition.

“We didn’t think this would be such a drama,” Real coach Zinedine Zidane said. “But my team showed that they know how to react.

“We always play to win and show the hunger to win. No way were we happy with the draw.”

Gladbach, who also conceded a 90th-minute equaliser in their 2-2 draw at Inter Milan last week, are second in the group on two points, with Shakhtar top on four after a 0-0 draw with Inter.

Zidane had been hoping to carry his side’s momentum from their 3-1 weekend win over Barcelona in La Liga into the game.

Yet despite their confidence in possession, chances were few and far between.

The Foals struck on the break with Alassane Plea pouncing on a Toni Kroos mistake to set up Thuram for his first goal in the competition.

Real initially had more spark after the break and hit the woodwork when Asensio’s 46th-minute shot was headed on to the crossbar.

Gladbach then struck against the run of play, with 23-year-old France youth international Thuram tapping in on the rebound after keeper Thibaut Courtois had pushed out a shot from Plea.

With the Germans thinking the game was already won, Real pulled a goal back when Casemiro headed on for Benzema, who became only the second player to score in 16 consecutive Champions League seasons.

Brazilian Casemiro then dashed Gladbach’s hopes of a memorable win, driving the ball into the roof of the net in stoppage time.

“When you concede two late goals and drop the points it is not a good feeling,” Gladbach coach Marco Rose said. “It came down to the quality of Real. We wanted to defend better until the end, but sometimes you need a little bit of luck and we didn’t have that tonight.”

Zapata double allows Atalanta to fight back and share points 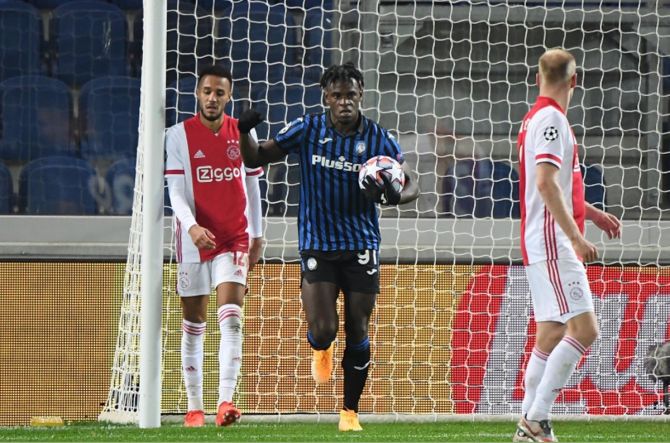 Striker Duvan Zapata scored twice in six minutes to drag Atalanta back from a two-goal deficit and ensure a 2-2 draw with Ajax Amsterdam in their Champions League Group D clash on Tuesday.

The Colombian international’s double came after defensive lapses had allowed the Dutch to go 2-0 ahead at the interval with captain Dusan Tadic scoring a penalty and teenager Lassina Traore adding a second eight minutes later.

Atalanta, who were quarter-finalists last season, moved second in the group after opening with a comfortable away win over Denmark’s Midtjylland last week while it was Ajax’s first point after losing at home to Liverpool last week.

A foot-high challenge from Robin Gosens on Traore offered Ajax a chance to open the score and Tadic coolly converted the resultant spot kick on the half hour mark.

Traore added the second eight minutes later as a cross from the left by David Neres was spilt by Atalanta goalkeeper Marco Sportiello and Traore pounced to scramble it over the line.

Atalanta pulled one back in the 54th minute as captain Alejandro Gomez delivered a high cross that Zapata rose to meet with an exaggerated jump above the Ajax defence, heading the ball firmly down into the ground and over the head of goalkeeper Andre Onana.

Zapata levelled matters six minutes later after being set away on the right of the attack by Josip Illcic and hammering home a powerful shot.

Onana made two stops in the second half to deny Illcic’s free kick and a close-in chance for Mario Pasalic as Atalanta kept trying to add to their tally.

But Ajax also had chances in the final 15 minutes to win the game, notably when their new Brazilian signing Antony forced a full length diving save out of Sportiello.

© Copyright 2021 Reuters Limited. All rights reserved. Republication or redistribution of Reuters content, including by framing or similar means, is expressly prohibited without the prior written consent of Reuters. Reuters shall not be liable for any errors or delays in the content, or for any actions taken in reliance thereon.
Related News: Liverpool, Gladbach, Casemiro, Marseille, Duvan Zapata
SHARE THIS STORYCOMMENT
Print this article 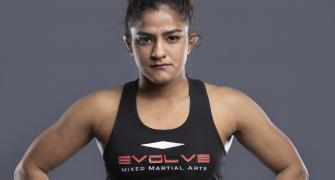 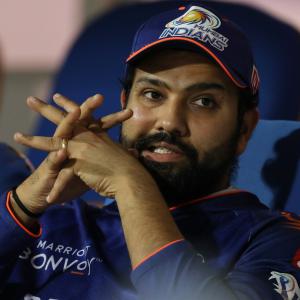 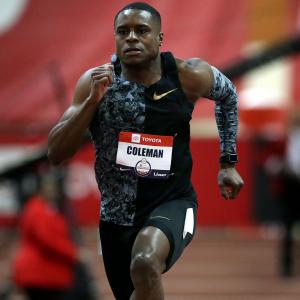