Cech's injury has Czechs worried ahead of Euro game

Goalkeeper Petr Cech has tried out a specially-designed mask to protect his broken nose and allow him to try to play for the Czech Republic in their Euro 2012 playoff against Montenegro on Friday.

The Chelsea player, however, was not completely confident of being ready for the first leg of the playoff.

"If the game was today I would not be able to play," Cech, who broke his nose against Blackburn Rovers in a Premier League game on Saturday, said on Wednesday. 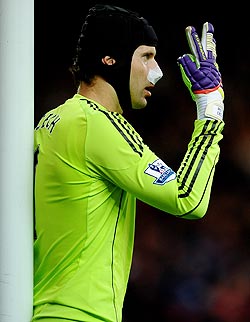 "The mask will protect me from further injury but if I will be 100 percent I do not know. And in the playoffs you have to give 100 percent."

Czech coach Michal Bilek, already without suspended midfielder Tomas Hubschman, said of Cech: "I hope he will be ready; his presence on the pitch is very important for us because he is one of the best goalkeepers in the world."

If Cech cannot play, Bilek will turn to Hamburg SV's Jaroslav Drobny who started in the country's 2-2 draw with Scotland in qualifying.

Coach Branko Brnovic has included DC United midfielder Branko Boskovic, who should add depth in the playmaking department even though the 31-year-old player was sidelined for almost a year with a serious knee injury.

The addition of Boskovic, who replaces Olympiakos's Petar Grbic, is the only change to the squad for the game in which Montenegro will be looking to slow down the Czech Republic's Arsenal playmaker Tomas Rosicky.

"We analysed them and noticed that Rosicky is a real leader in midfield," Brnovic said.

"If we neutralise him we have more chance. Generally speaking, the Czech team are very well organised, getting players behind the ball."

The Czechs, who won the tournament in 1976, will travel to Podgorica four days later for the return leg.

Montenegro, having registered just one win in 10 games on their debut in 2010 World Cup qualifiers, have impressed in their Euro 2012 campaign, especially in a pair of draws with group winners England.

Central defender Miodrag Dzudovic said the team would have to repeat those performances if they were to eliminate the Czech Republic and reach next year's finals in Poland and Ukraine.

"We are looking at two very difficult games and unless the entire team plays to the best of our abilities, we have a very slim chance of beating the Czechs," he said.

"We have a realistic chance if we stick to our 'all for one and one for all' mentality.

"Of course it would be great to keep a clean sheet in the first leg in Prague but that doesn't mean we should sit back and defend, because our strikers Mirko Vucinic and Stevan Jovetic are the team's two outstanding players," he said.

© Copyright 2020 Reuters Limited. All rights reserved. Republication or redistribution of Reuters content, including by framing or similar means, is expressly prohibited without the prior written consent of Reuters. Reuters shall not be liable for any errors or delays in the content, or for any actions taken in reliance thereon.
Related News: Czech Republic, Tomas Rosicky, Petr Cech, Stevan Jovetic, Miodrag Dzudovic
SHARE THIS STORYCOMMENT
Print this article