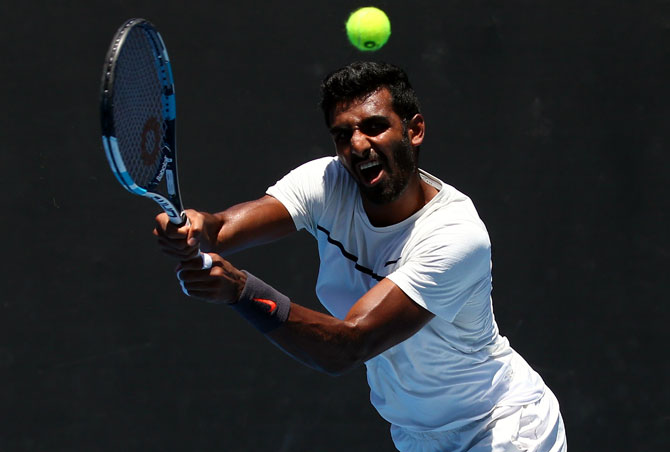 IMAGE: Prajnesh Gunneswaran had reached the main round of the Australian Open but lost in the opening round. Photograph: Mike Owen/Getty Images

Prajnesh is now ranked 102 in the men's singles rankings with a jump of seven places while Ankita leapfrogged 35 places to a career-high 168 in the women's singles.

The Chennai left-hander will spearhead India's challenge in the Davis Cup World Group Qualifiers against Italy in Kolkata this week while Ankita will play in Fed Cup in Astana, Kazakhstan next week.

"I started the year on a good note, first in Australia and then a title and today a career-best rank, all this in one month. I am just feeling grateful to people who did not give up on me," said Ankita from Thailand. "This has given me a lot of belief that slowly and steadily, I will get to my goals," added Ankita, who is supported by ONGC and Sports Authority of Gujarat.

The next best female singles player Karman Kaur Thandi, who has been chosen for the US $25000 annual financial support by the ITF through Grand Slam Development Fund (GSDF), dropped five places to 210.

In the ATP list, Ramkumar Ramanathan dropped two places to 133 while injured Yuki Bhambri (151) slipped out of top-150 with a steep fall of 13 places.

In the doubles, all top five Indian players slid in the ranking table.