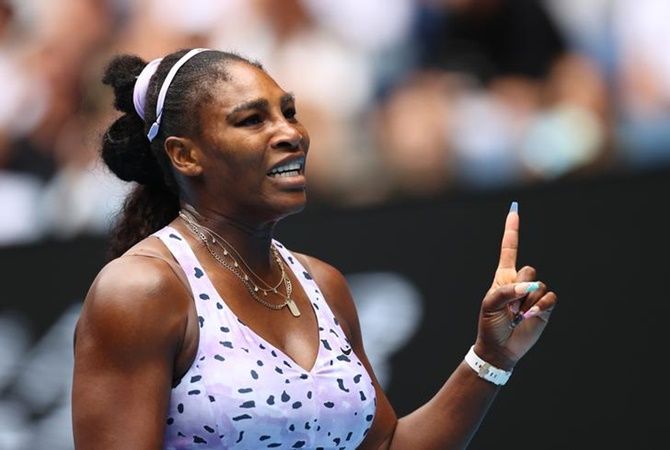 Court has attracted heavy criticism for voicing her religious-based opposition to same-sex marriage.

The Australian Open on Monday marked the 50th anniversary of her 1970 feat of winning all four major titles in one calendar year with compatriot Rod Laver, who completed the calendar slam twice in 1962 and 1969, handing her a trophy to some applause.

"There's only one thing longer than a list of Margaret Court's tennis achievements: it's her list of offensive and homophobic statements," said the seven-times Grand Slam champion.

"Serena, do me a favour, get two more Grand Slams this year and get to 25 so we can leave Margaret Court and her offensive views in the past, where they both belong. Thank you," added the American.

Williams, who won the last of her 23 majors at the Australian Open in 2017, was knocked out of this year's tournament in the third round.

Court, a Christian pastor at a Perth-based church she set up decades ago, launched a tirade against transgender athletes and called the teaching of LGBTI materials at schools the work of the 'devil' during a sermon last month.

Tennis Australia has been quick to stress it does not agree with Court's views on same-sex marriage or the LGBTI community and has said the recognition is solely for her tennis achievements.

McEnroe said the person could not be separated from the achievements.

"The air quality in Melbourne is not the only nightmare that Tennis Australia is having," said the American, referring to smoke from recent bushfires. "Margaret Court is another one."

"This year marks the 50th anniversary of Margaret Court's Grand Slam and Tennis Australia is facing a dilemma; What do they do with their crazy aunt?"

"It's just unfortunate because I think what Margaret Court doesn't realise is how many people she hurts with her rhetoric," said the American.

"She can believe whatever she wants but she's actually hurting people and that's not OK."