The effects of anti-CAB protests in the North East have spilled over to the sports field with Assam's Ranji match suspended, while also forcing the postponement of the Indian Super League match between NorthEast United FC and Chennaiyin FC in Guwahati. 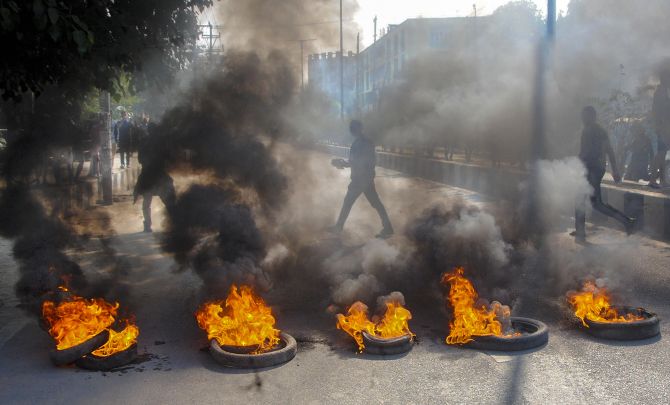 IMAGE: Demonstrators burn tyres during a strike called by the All Assam Students Union and the North East Students Organisation in protest against the Citizenship Amendment Bill in Guwahati on December 10, 2019. Photograph: PTI Photo

Day four proceedings of the Ranji Trophy game between Assam and the Services Sports Control Board (SSCB) in Guwahati were on Thursday suspended due to the curfew imposed in the city following protests over the Citizenship (Amendment) Bill.

The hosts were in the middle of their series-opener against the Services Sports Control Board (SSCB). However, after stating that the game in Tripura -- between the hosts and Jharkhand -- was also suspended, the BCCI clarified that the match was going ahead as scheduled despite the protests in Agartala.

"The match Guwahati stops at where it ended on Day 3," BCCI GM Cricket Operations Saba Karim told PTI, indicating that the game would be considered a draw in case there is no rematch.

Asked if the game will be replayed or the points will be shared, Karim added: "As the curfew has been imposed, both teams (in Assam) and match officials have been advised not to leave the hotel. We follow whatever advice we receive from the host association."

He had earlier stated that matches at both the venues had been called off.

"We were getting regular feedback on the situation in Tripura from the host association. Now, we have come to know that things are under control and match can go ahead as scheduled," Karim stated in a fresh conversation with PTI.

Karim is directly in-charge of domestic and women's cricket operations in the country.

"The match is going on," added Jharkhand and India player Shahbaz Nadeem, who has been rested from the ongoing match in Tripura due to a shoulder niggle.

The game in Guwahati was heading for an exciting finish with Assam needing  168 runs for victory with five wickets in hand.

Services had bounced back strongly after being bundled out for 129 in their first innings.

They dismissed Assam for 162 in response and scored 272 runs in the second innings. In their second essay, Assam were 74 for five at stumps on day three.

It was passed by Rajya Sabha on Wednesday after being cleared by Lok Sabha on Monday.

The Indian Super League (ISL) football match between NorthEast United FC and Chennaiyin FC in Guwahati was on Thursday postponed indefinitely after the host city was placed under a curfew following protests against the Citizenship (Amendment) Bill.

The game was slated to be played at the Indira Gandhi Athletics Stadium there.

"Due to the ongoing unrest in Guwahati, match 37 between NorthEast United FC and Chennaiyin FC has been postponed until further notice," the ISL said in a statement.

"The league has been in consultation with the concerned authorities over the past 48 hours to determine the best course of action. The safety of fans, players and league staff is of paramount importance, which has led to this decision," it added.

"Further information regarding the match will be conveyed in due course."

The two teams did not train on Wednesday and the pre-match media interactions were also called off.

Guwahati, the epicentre of anti-CAB protests, was placed under indefinite curfew on Wednesday night while the Army was called in at four places.

Assam Rifles personnel were deployed in Tripura on Wednesday after the two north-eastern states plunged into chaos over the hugely emotive Citizenship (Amendment) Bill or CAB, which seeks to provide Indian citizenship to non-Muslim migrants from Pakistan Bangladesh and Afghanistan.

All Assam Students' Union has called for a protest at 11am in Guwahati.

A team official of NorthEast United FC said the side is currently stuck in a hotel in Guwahati.

"We can't get out of the hotel at this moment. Situation is not good here at all," the official said on conditions of anonymity. 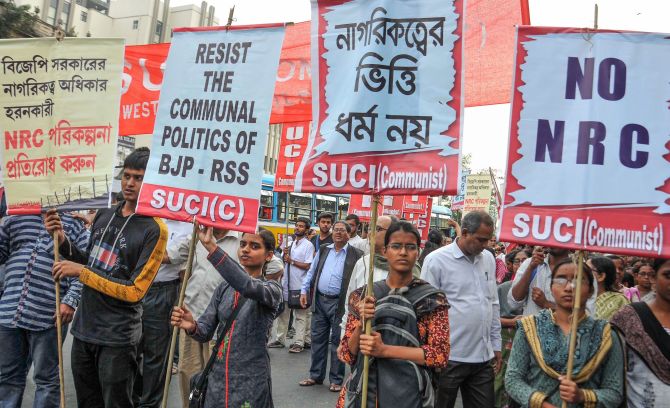 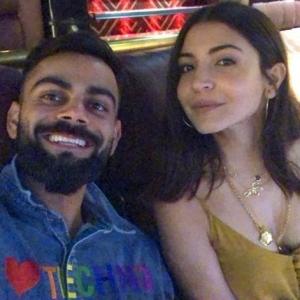