Disappointing to see members speculating about our sincerity and motives: BWF 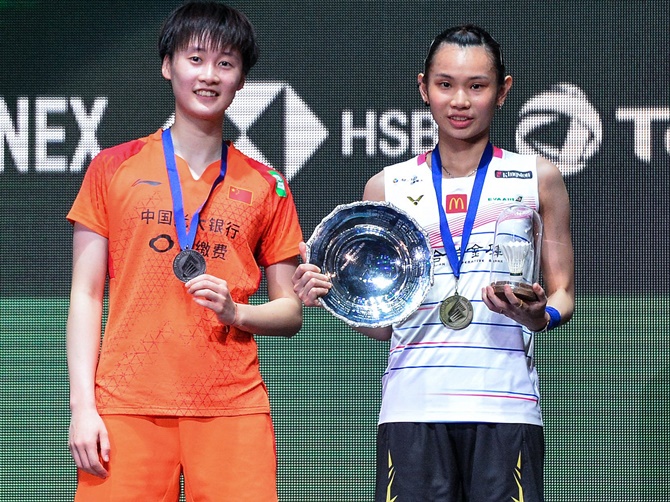 IMAGE: BWF secretary general Thomas Lund said the decision to go ahead with the All England Championships was made based on the best advice at that time. Photograph: All England Badminton/Twitter

Badminton World Federation said it is 'disappointing' that some players, including Indian star Saina Nehwal, questioned its 'sincerity and motives' when it continued with the All England Championships despite the rapidly-growing threat of COVID-19 pandemic.

BWF's decision to conduct the Super 1000 tournament in the wake of the coronavirus outbreak came for sharp criticism from the top shuttlers of the world, including London Olympics bronze medallist Nehwal, who had accused the sport's administrators of placing money above players' safety.

In an open letter, BWF secretary general Thomas Lund said the decision to go ahead with the All England Championships was made based on the best advice at that time.

"It has been very disappointing to see some members of the badminton community speculate on the sincerity and motives of the BWF in this time of crisis," Lund wrote.

"Our number one concern has always been the health and safety of all of our participants. However, at the same time, we are deeply concerned about the cancellation of tournaments and the flow-on effect this has on elite players and coaches whereby they could now be in a position of temporary unemployment and loss of income."

The coronavirus outbreak, which originated in the Chinese city of Wuhan, saw the postponement and cancellation of several high-profile sports events across the world.

While BWF too had postponed a few tournaments, it went ahead with the All England Championship as planned, despite growing cases of the rapidly spreading disease.

Top players had slammed BWF for taking the deadly disease 'too lightly' and putting their lives at 'risk' by going ahead with the tournament two weeks ago.

Former top-10 Danish player Hans-Kristian Vittinghus had said he doesn't 'get it' why BWF was still continuing with events, while his compatriot Mads Conrad-Petersen was 'worried and ashamed' that All England was played under completely normal standards"

However, Lund said it was tough to take decisions in a "fast-changing landscape" where guidelines were revised on daily basis and the approach of different governments was also not consistent.

"Given the fast-changing landscape unfolding with governments implementing measures in inconsistent ways and with many considerations and speculations within our own community, it has therefore been challenging to meet all global expectations from all of you," he said.

"Of course, hindsight is a wonderful thing. It was not difficult to argue that 'wrong decisions' had been taken in an environment changing on nearly an hourly basis, with further decisions therefore required."

"This has not only been the case for BWF, but most authorities around the world. However, we maintain that BWF made the best possible decisions at the time and with sincere motives to protect both the health and livelihood of all participants. It is easy to evaluate and come to different conclusions, but BWF is confident this was the right decision for everyone."

BWF had eventually suspended all the HSBC BWF World Tour and other tournaments from March 16 to April 12 before further suspending five more tournaments which included the three continental championships falling inside the the April 26 deadline for Olympic qualification.