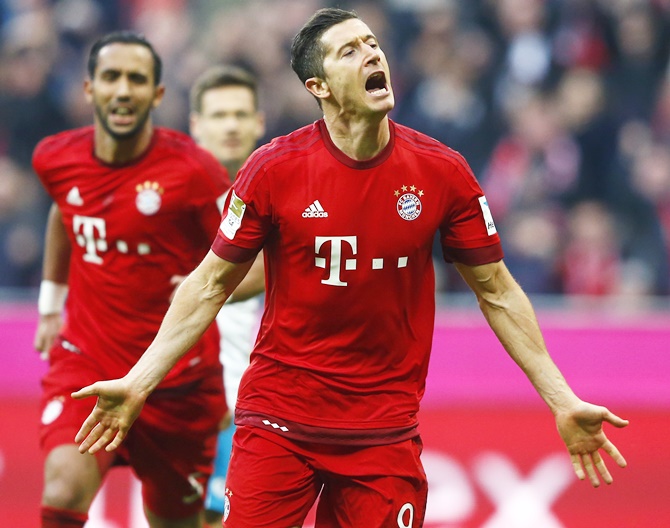 Bayern Munich's Robert Lewandowski scored twice in a 3-0 victory over Schalke 04 on Saturday that edged them closer to a record fourth consecutive league title.

The Bundesliga's leading scorer took his tally to 27 goals after a fine turn and shot in the 54th minute and a well-timed header 11 minutes later before Arturo Vidal sealed the win.

Bayern, eyeing a second treble-winning season after 2013 and facing Atletico Madrid in the Champions League semi-final, are on 78 points, 10 clear at the top.

Second-placed Borussia Dortmund can cut the lead down to seven when they take on Hamburg SV on Sunday.

"I got some rest this week because I did not play in the Champions League," Lewandowski told reporters. "We were a bit too slow in the first half but we did much better after the break with the three goals.

Bayern were in control from the start, dominating possession against a two-line defence in the first half.

Vidal's left-foot effort scraped the post seven minutes after the restart with the Bavarians again pressing for a goal.

The Chilean did everything right when he headed on to Lewandowski, the Bundesliga top scorer turning beautifully after controlling the ball with his chest.

The Poland forward claimed his second when he rose at the far post to head in Rafinha'a cross.

Vidal, on target against Benfica in midweek, also got on the scoresheet, sliding in to complete a superb Franck Ribery solo run into the box.

Schalke's second defeat in three games left them in seventh place on 45 points and at risk of missing out on European football next season.

Slovenian midfielder Kevin Kampl struck with a fine volley less than a minute after coming on in the 70th minute and teenager Julian Brandt slotted in for his seventh goal of the campaign five minutes later.

Karim Bellarabi added a third in the last minute to lift Leverkusen to 51 points, two ahead of Hertha Berlin.

Hertha lost 2-1 at Hoffenheim, courtesy of Mark Uth's 85th minute winner, and have now failed to win any of their last three matches.

VfL Wolfsburg slumped to a 3-2 loss at struggling Werder Bremen and will most likely have to forget about Champions League action next season, stuck in eighth place on 39.

Werder's crucial win, with Claudio Pizarro scoring their first goal and becoming the club's all-time top scorer with 102, lifted them to 31 but they remained in the relegation playoff spot.