The Indian golfer, playing with World No 1 Brooks Koepka (68), had 17 pars and his sole birdie was courtesy a brilliant 30-foot monster putt. IMAGE: Shubhankar Sharma in action during the first round of the 148th Open Championship held on the Dunluce Links at Royal Portrush Golf Club in Portrush, United Kingdom. Photograph: Andrew Redington/Getty Images

India's Shubhankar Sharma was one of the only four golfers to play a bogey-free round as he brought home a card of one-under 70 on the opening day of the 148th Open Championships, in Portrush, United Kingdom.

Sharma, playing with World No 1 Brooks Koepka (68), had 17 pars and his sole birdie was courtesy a brilliant 30-foot monster putt and when play ended he was tied-20th and four shots behind sole leader J B Holmes, who birdied the 18th to move to five-under.

Ireland's Shane Lowry was second at four-under, while 13 players, including Asia's top star Kiradech Aphibarnrat, who is nursing an injury, shot three-under 68 to be tied-third and the big bunch included Koepka.

Sharma was one of the four players to shoot a bogey free round and the others were Kiradech Aphibarnrat (68), Tony Finau (68) and Tommy Fleetwood (68).

As the Open returned to Portrush after 68 years, the conditions were demanding and the course required a great deal of focus with premium on placement.

However, some of the big names came to grief. None more than Rory McIlroy, a big pre-tournament favourite.

McIlroy, opened with a quadruple bogey and ended with a triple bogey for an eight-over 79, which could see him miss the cut in a tournament, where he has not finished outside Top-5 since 2014, when he won the Open at Hoylake.

The 2013 Open winner, Phil Mickelson went to five-over 76 and three-time Open winner, Tiger Woods, who won the Masters for his first Major since the US Open in 2008, was struggling at seven-over 78.

Woods' seven-over 78 is his highest first-round score in The Open Championship, while McIlroy's eight-over 79 is his seventh career score of 79 or worse on the PGA TOUR and lying at 150th he was at his worst-ever first round position in a Major.

It was Sharma's first under par round at the Open, where he made his debut and made the cut last year at Carnoustie.

Koepka shot three-under 68 with four birdies and one bogey, while the third player in the group, Louis Oosthuizen, the Africa No. 1, also shot 70.

Speaking on his bogey free first round, Sharma said, "I was very calm and I am proud of the way I handled myself on the course and anytime you play a bogey free round, especially in a Major, it is good and satisfying.

"I made a few crucial par putts coming in, especially the ones on the 14, 15, and 16th were key. And then that up-and-down birdie on 18 was nice, too. I think I played really solid today."

Sharma admitted to having left a couple of chances.

"In the first few holes after I started I should have made a birdie or two. On 12 I think I should have made birdie. I was on the left side of the green, hit it up to about 5 feet and missed that. And had a few chances on the front nine, as well. But I'm very pleased. It's not easy out there, so pretty happy with it."

"So I was in the center of the fairway, hit a bad second shot and it was a tough up-and-down from there. Made that par putt. So pretty pleased with the day. After that (birdie on 13) I kind of was beginning to read the line properly and made a few crucial ones coming in."

On his playing partner, Koepka, Sharma said, "He just played solid. The best thing about him is that he isn't very cluttered in the mind. He's very calm on the course.

"He has good decision making and you can see that he's the World No. 1. He gets on the ball and gets on very quickly. I think that's the best part." 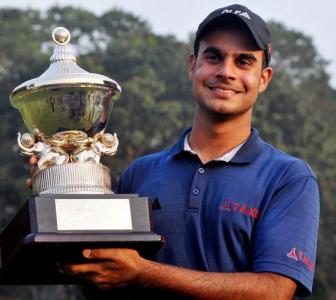 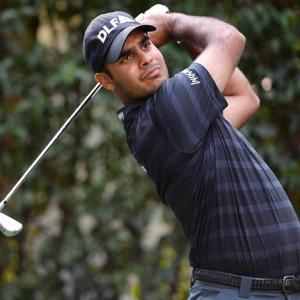