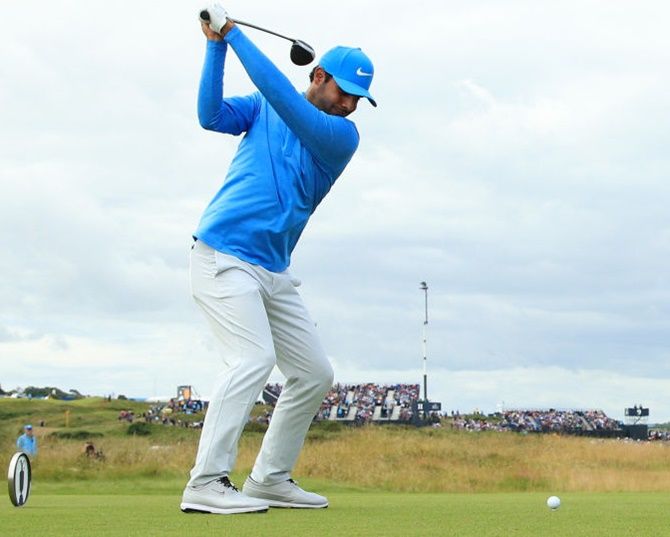 IMAGE: Shubhankar Sharma of India tees off the 9th during the second round of the 148th Open Championship. Photograph: Andrew Redington/Getty Images

Shubhankar Sharma has assured himself of the weekend action after signing for a one-over-par 72 in the second round of The 148th Open, in Portrush, Northern Ireland, on Friday.

It will be the second time he would make the cut in as many starts at the Open.

It became wet in the afternoon and was likely to worsen, making it difficult for the second wave.

Meanwhile, Ireland's Shane Lowry moved to the top of the leaderboard even though he still had the back nine to play.

That put Lowry one ahead of first-day leader, American J B Holmes (66-68) who was eight-under for 36 holes.

The cut is likely at one-over or two-over.

For Shubhankar, the three birdies on the front nine on Par-5s second and ninth, promised another fine round like one-under 70 on the first day, but two holes – the 11th and 12th – ruined those hopes.

He had three birdies, all on the front nine, and none on the back nine. He had two bogeys on either side of the course for a round of 72, which added up to even par 142.

Summing up the round, Shubhankar said, "A little bit disappointed. But again, I'm happy the way I played the last 36 holes. I was very calm on the course. I played decent. Today a few -- I hit a few shots that I didn't want to and dropped a few shots on the back nine. But it's all part of the game."

The consolation was that he was assured of a cut for the second day running and would play out the final round on his 23rd birthday.

"That will be nice if I can get a good closing," said Shubhankar with a smile.

A year ago at Carnoustie, Shubhankar had rounds of two-over 73 and even par 71 to make the cut at two-over 144.

In the morning, his first bogey-free streak ended on the first hole itself, when his par putt stopped at the lip. But for two holes, the 11th and 12th, Shubhankar's play was better than what the card showed.

He missed a few makeable putts, for both birdies and pars, which stopped at the lip.

Tommy Fleetwood (67) got to seven-under, where he was joined by veteran Lee Westwood (67). Playing his 25th Open and 82nd Major overall, Westwood has three seconds and six thirds and 18 Top-10s, but is still looking for a breakthrough in Majors, a journey he started at the Open in 1995.

Brooks Koepka (69) had a relatively quiet day but he was lurking in the Top-10 at five-under.

Jordan Spieth made a big run on the front nine from fifth to eighth as he ran a sequence of birdie-birdie-eagle-birdie, but in the remaining 10 holes he had two bogeys and just one birdie for a day's work of 67 and a total of five-under 137.

Rory McIlroy, who shot 79, on first day was yet to start second round.

Defending champion Francesco Molinari (74) and US Open winner, Gary Woodland, both three-over on first day, were also yet to begin second round.

Tiger Woods to miss cut despite improved round 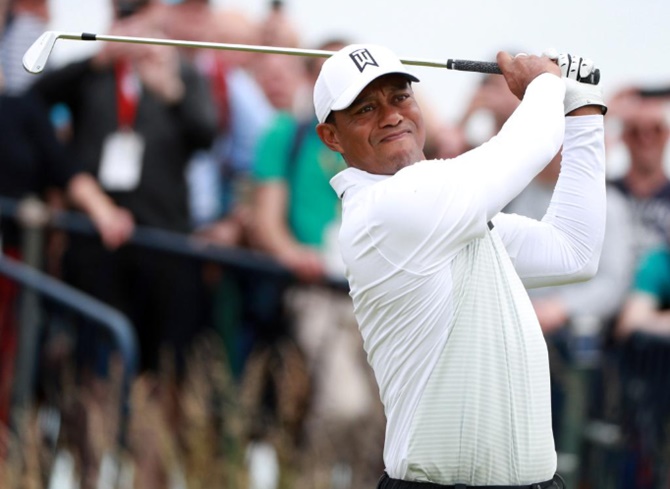 IMAGE: Tiger Woods of the US on the 9th hole during the second round. Photograph: Ian Walton/Reuters

A battling Tiger Woods rediscovered some of the old magic at the British Open but the American will be packing for home after failing to make the cut at Royal Portrush.

The 15-time major champion carded a one-under 70 but failed to repair the damage of Thursday when he struggled with back pain and shot an ugly 78.

Woods, who won the last of his three British Opens in 2006, made four birdies in his first 11 holes and looked to be in with a shout of surviving until the weekend.

He birdied the first and the smile returned as he rolled in another at the sixth. A bogey at the seventh halted his momentum but he birdied 10 and 11 to get the fans roaring.

It was always a long shot though, with the cut expected to be at around one over, and as the rain closed in so Woods' hopes vanished with bogeys at the 17th and 18th.

"It's more frustrating than anything else because this is a major championship and I love playing in these events," said Woods.

"I love the atmosphere. I love just the stress of playing in a major. And unfortunately, I've only had a chance to win one of them (this year) and was able to do it. But the other three I didn't do very well," he added.

Woods said that he had to accept that his days of being a consistent threat were now behind him.

"That's one of the hardest things to accept as an older athlete is that you're not going to be as consistent as you were at 23. Things are different," he said.

"I'm going to have my hot weeks. I'm going to be there in contention with a chance to win, and I will win tournaments. But there are times when I'm just not going to be there. And that wasn't the case 20-some-odd years ago. I had a different body and I was able to be a little bit more consistent."

The American said his next task was getting ready for the playoff stage of the PGA Tour season but that he needed a break first.

"I just want some time off just to get away from it. I had a long (vacation) trip to Thailand and then trying to get ready for this event, to play this event, it's been a lot of travel, a lot of time in the air, a lot of moving around and different hotels and everything. I just want to go home," he said.

Great rival Phil Mickelson is also in danger of missing the cut and if he does it would be the first time in the 83 majors in which they have both competed that both missed the weekend.