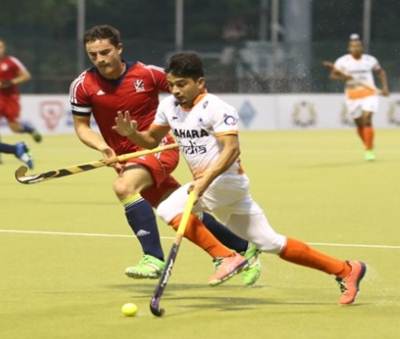 India conceded a goal in the dying minutes of the match and went down 3-4 to Great Britain in their second outing at the fifth Sultan of Johor Cup junior hockey tournament, in Johor Bahru, Malaysia, on Monday.

They started their campaign with a convincing 5-1 victory over arch-rivals Pakistan on Sunday.

They trailed 2-3 at the end of the first-half but held their nerve to emerge triumphant.

Great Britain went ahead in the sixth minute when James Simpson scored from a field goal. They could have doubled the lead in the 10th minute after being awarded a penalty-corner, but India's goalkeeper, Suraj Karkera, brought off a good save.

The Indians restored parity in the 17th minute through Sumit Kumar, who scored after the ball ricocheted off the English ‘keeper’s pads.

Sumit then put India into the lead for the first time, finding the net from a field goal in the 26th minute.

When Manpreet scored in the 29th minute to make it 3-1, it looked as if the defending champions would emerge easy winners, but Luke Taylor pulled a goal back from a penalty-corner to take Great Britain into the breather trailing 2-3.

Great Britain pressed hard for the equaliser and found it in the 47th minute through Jack Clee.

Two minutes from the hooter, Taylor clinched victory for Great Britain from a penalty-corner.

India face Argentina next on October 14.

Image: Action in the fifth Sultan of Johor Cup match between India and Great Britain.