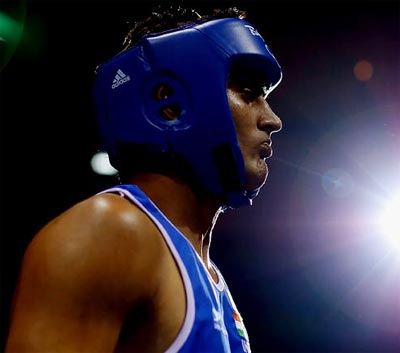 Brushing aside speculations about his availability for the upcoming World Championship trials, India's star boxer Vijender Singh returned to Patiala on Monday from a short leave and confirmed he is ready to fight it out for a place in the team.

"I had taken a short leave and my coaches and seniors knew of it. I had informed all the concerned authorities before leaving. There were some personal issues that I had to
attend to and I am back in Patiala now," Vijender said.

"I don't understand how this speculation started but I would certainly be giving the trials tomorrow and hopefully manage a place in the side," quipped the former world number
one in the middleweight (75kg) category.

The former Olympic and World Championship bronze-medal winner's return to the ring is being closely watched after the sabbatical he was forced into due to a drug scandal earlier this year.

So much so that the leave he took last week led to speculation over whether he would take place in the trials on Tuesday.

"I know of the speculation in the past few days, good to know that I still generate a lot of interest even after laying low for quite some time. I am well-prepared for the trials and hopefully, I would be in the team," laughed the 27-year-old.

But the weight category in which Vijender will compete remains a mystery as the boxer refused to divulge whether it would be 75kg or a division above at 81kg for the three-day trials.

"I have made up my mind on that but I don't want to say anything about it right now. When I take the ring tomorrow, everyone will know," said Vijender.

Vijender was the first Indian boxer to grab a World Championships medal when he brought home a bronze from the 2009 edition in Milan.

India's participation hinges on the International Boxing Association's (AIBA) green signal as the world body is clearing the country's schedule on a tournament-to-tournament
basis due to the IBF's provisional suspension.

The trials were initially scheduled from August 16 to 18 but had to be postponed, the reasons for which were never explained clearly by the IBF.

Suranjoy Singh (52kg), who has been laid low by a knee injury after dominating the ring with eight back-to-back gold medals between 2010-11, would be back in the ring for perhaps his last shot at a World Championships medal.

Devendro has been in top form ever since making a splash at the London Olympics last year, where he fought his way to the quarter-finals. He followed that up with a silver medal at the Asian Championships this year.

The 56kg category seems taken as Shiva Thapa (56kg) has been in rampaging form. The 19-year-old was India's lone gold-medallist at the Asian Championships this year.

Olympian Sumit Sangwan starts as the favourite for the 81kg category, while the heavier divisions, 91kg and +91kg, would be contested hard.