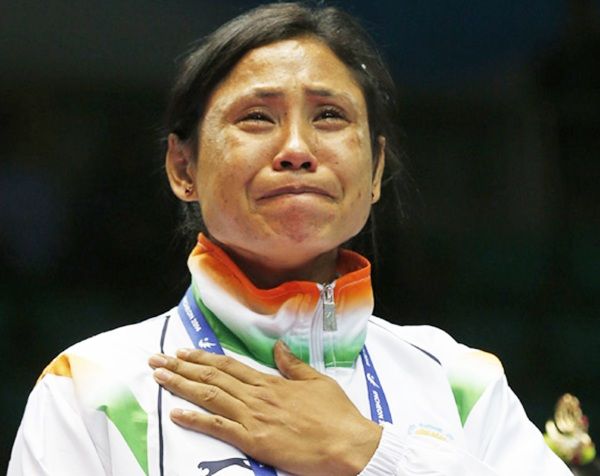 Boxer Sarita Devi cries at the podium after she refused to take the medal. Photograph: PTI Photo

Boxer L Sarita Devi expressed happiness over International Boxing Association's (AIBA) decision of imposing a ban on her for just one year. There had been speculation of a lifetime ban making rounds in the boxing circles.

She also thanked Sachin Tendulkar, Boxing India and Sports Authority of India for supporting her during hard times.

"I am very happy, I would like to thank the sports ministry, Sachin Tendulkar, Boxing India, SAI and the entire nation for supporting me. Now that I will be able to participate in the Olympics, I want to practice hard and bring glory to the nation," Sarita Devi said.

"I had hoped that AIBA would be less severe on me considering my conduct during last 10-15 years," she added.

"I am hugely relieved," said Sarita, who had refused to wear the medal at Incheon and left it on the podium when the presentation ceremony concluded.

"I will now be able to participate in the Games and will work harder to bring laurels to the nation," she added.

"We all wanted that she should get justice. The whole idea behind writing to AIBA was that for one mistake her career shouldn't be jeopardized," he stated.

Furious after losing her semi-final to local favourite Park Ji-na in the women's lightweight division in Incheon, Sarita refused to accept her bronze medal, prompting the International Amateur Boxing Association (AIBA) to suspend her indefinitely.

AIBA president Ching-kuo Wu predicted a bleak future for the Indian, who subsequently apologised for the behaviour, and BI officials were happy that the 29-year-old escaped a life ban.

"AIBA's verdict on Sarita Devi comes as a relief," BI president Sandeep Jajodia said in a statement, summing up the mood in the Indian boxing community.

Jajodia later told reporters Sarita had also been fined 1000 Swiss francs ($1,038) while India's Cuban coach B.I. Fernandez, who cried foul after the bout and criticised officials, was slapped with a two-year ban and fined 2000 Swiss francs.