'Blade Runner' Pistorius back in court for murder bail hearing

"Blade Runner" Oscar Pistorius, the South African double amputee who became one of the biggest names in world athletics, is due in court for a second time on Tuesday to apply for bail after being charged with murdering his girlfriend.

The arrest of the 26-year-old Olympic and Paralympic sprinter has stunned millions across the world who held him up as a hero for triumphing over adversity to compete with able-bodied athletes at the highest level of sport.

His girlfriend, model Reeva Steenkamp, was found shot dead in his Pretoria home in the early hours of Thursday, with initial reports suggesting Pistorius may have mistaken her for an intruder. 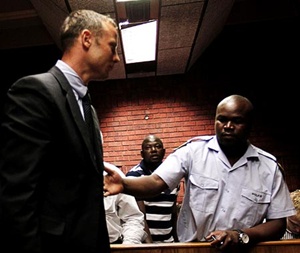 However, police have made clear that Steenkamp, who will be buried on Tuesday, was killed by more than one gunshot, that Pistorius was the only suspect and that neighbours had heard earlier disturbances.

They said a 9mm pistol was recovered at the house, where there was no sign of a break in.

Since the arrest, South African newspapers have published lurid, unconfirmed details of the killing. If true, they are likely to undermine any potential argument of self-defence, experts say.

His agent said Pistorius, who faces life in prison if found guilty, disputes the murder charge "in the strongest possible terms".

Prosecutors are expected to oppose any request for bail at Tuesday's hearing, suggesting they will have to present the court the state's full version of the shooting as laid out in the charge sheet.

Proceedings are likely to start after 7:00 a.m. British time.

At his bail hearing on Friday, the athlete broke down in tears when the charges were read and prosecutors said they believed the killing was premeditated.

The hearing was adjourned after 40 minutes and Pistorius was taken back to the Pretoria police station where he has been held since. A statement from his family at the weekend said he was "numb" with shock and grief.

The case has gripped sport-mad South Africa, where Pistorius was seen as a rare hero who had transcended the racial divides that persist 19 years after the end of apartheid.

Steenkamp will be buried at a private family ceremony in the coastal city of Port Elizabeth.

The law graduate appeared on television on Saturday in an "Island of Treasure" reality show filmed last year after her family gave permission for the programme to be aired.

Pistorius' endorsements and sponsorships, which include sportswear giant Nike, British telecoms firm BT, sunglasses maker Oakley and French designer Thierry Mugler, are thought to be worth as much as $2 million (1.2 million pounds) a year.

Nike said on Monday it had no plans to use Pistorius in future campaigns. Other sponsors have said they will not make any decisions about continued support until the legal process has run its course.

However, Pistorius has cancelled scheduled track appearances in Australia, Brazil and Britain in the coming months to focus on his attempt to clear his name.

Born without a fibula in either leg, Pistorius runs on carbon fibre prosthetic blades after he underwent a double amputation as an 11-month-old baby. He was the first double amputee to run in the Olympics and reached the 400-metres semi-finals in London 2012.

In last year's Paralympics he suffered his first loss over 200 metres in nine years. After the race he questioned the legitimacy of Brazilian winner Alan Oliveira's prosthetic blades, but was quick to express regret for the comments.

© Copyright 2022 Reuters Limited. All rights reserved. Republication or redistribution of Reuters content, including by framing or similar means, is expressly prohibited without the prior written consent of Reuters. Reuters shall not be liable for any errors or delays in the content, or for any actions taken in reliance thereon.
Related News: Pistorius, Reeva Steenkamp, Nike, Thierry Mugler, Alan Oliveira
COMMENT
Print this article
'Blade Runner' Pistorius charged with murder, sobs in court
Pistorius was in an emotional state: Lawyer
'Blade Runner' Pistorius charged with murdering girlfriend

Pistorius accused of assaulting two women in rock concert in 2011