Manchester City's David Silva struck twice as they beat Crystal Palace 3-0 to join Chelsea at the top of the Premier League this weekend while Lionel Messi's double helped Barcelona to a 5-0 La Liga win over Cordoba.

The top two in England have 39 points but Chelsea can regain their three-point advantage with a win at Stoke City on Monday.

Barca's victory closed the gap on Real Madrid to one point while the leaders were away in Morocco, beating San Lorenzo of Argentina in the Club World Cup final.

Here is the round-up of all the football action across Europe on the weekend... 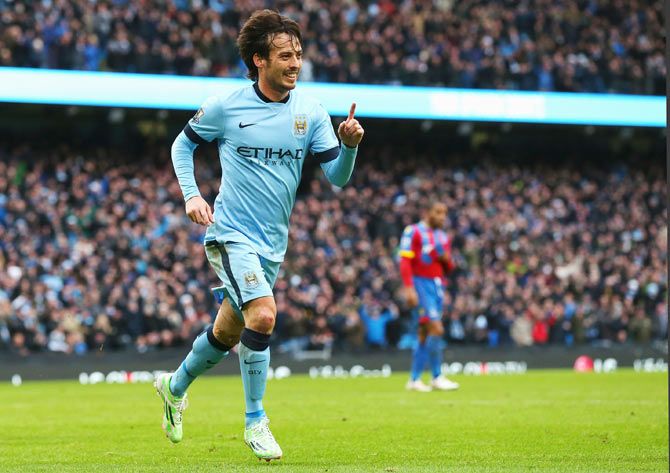 Manchester City increased the pressure on leaders Chelsea with a 3-0 home victory over Crystal Palace, David Silva scoring twice as the champions clocked up a sixth successive league win despite having no fit strikers.

City have 39 points but Chelsea can restore a three-point lead by beating Stoke City away on Monday.

United have 32 points, one ahead of West Ham United who continued their impressive form with a 2-0 home win over basement side Leicester City.

Southampton ended a run of four league defeats by beating visitors Everton 3-0 and stay fifth. Arsenal are sixth after a 2-2 draw at Liverpool. Lionel Messi continued his prolific form with a brace and Luis Suarez got his first goal in La Liga as Barcelona crushed second from bottom Cordoba 5-0 to finish the year a point behind leaders Real Madrid.

Pedro and and Gerard Pique were also on target for second-placed Barca who have 38 points from 16 matches as they kept the pressure on Real, who have a game in hand after winning the Club World Cup where they beat San Lorenzo in Saturday's final.

Messi had a quiet game against Cordoba but came to life in the final stages with two clinical finishes.

Atletico Madrid remain on the shoulders of the top two with their France striker Antoine Griezmann hitting a hat-trick as they came from behind to beat Athletic Bilbao 4-1.

Diego Simeone’s side are three points behind Barca following a strong second half showing against Bilbao and Griezmann shone in attack with his pace and movement. Bayern Munich's Arjen Robben (left) celebrates with his teammates after scoring against FSV Mainz 05 during their Bundesliga match in Mainz on Friday. Photograph: Ralph Orlowski/Reuters

Arjen Robben scored a late winner for Bayern Munich in a 2-1 victory at Mainz 05 as the champions went into the Bundesliga's winter break 11 points clear at the top.

Undefeated in the league, a second-string Bayern side won for the 14th time in 17 Bundesliga games this season.

Last season's runners-up Borussia Dortmund ended the year second from bottom, level on 15 points with Freiburg, after a 2-1 defeat at Werder Bremen. 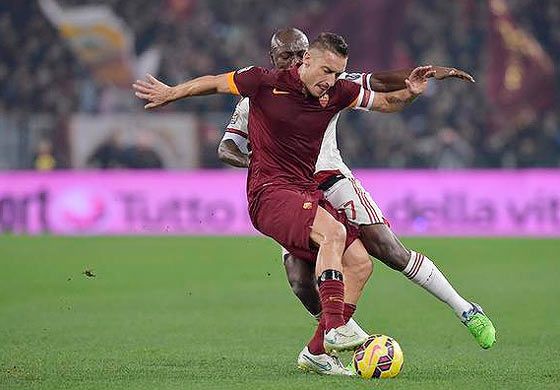 Francesco Totti is challenged by an AC Milan player during their match on Sunday. AS Roma/Twitter

Second-placed AS Roma spurned an opportunity to move within a point of leaders Juventus as they were held to a 0-0 draw at home to AC Milan.

Lazio, Napoli and Sampdoria are joint third on 27 points, 12 points off the pace.

Juventus and Napoli were absent from Serie A duties at the weekend as they prepared for Monday's Italian Super Cup encounter in Qatar.

Inter Milan, down in 11th place, came back from two goals down to draw 2-2 at home to Lazio while Sampdoria also shared a 2-2 draw with Udinese.

Paris St Germain are in third spot, three points off the pace, after the champions were held 0-0 at home by Montpellier.

Memphis Depay scored twice as PSV Eindhoven remained four points clear at the top of the table with a resounding 5-0 victory over visiting Go Ahead Eagles.

Feyenoord are in third spot, 12 points off the pace, following a 1-0 win at NAC Breda.

Giorgos Tzavellas and Facundo Pereyra scored as PAOK Salonika, seeking a first top-flight crown for 30 years, won 2-1 at Levediakos to go into the New Year with a one-point lead.

Second-placed Olympiakos Piraeus, who have 33 points from 15 games, romped to a 5-0 victory at Kalloni with Paraguay striker Jorge Benitez netting twice.

Asteras Tripolis are third, six points adrift of PAOK, after a 2-1 win over Xanthi while fourth-placed Panathinaikos' match with Kerkyra on Monday is the last before the winter break.