Italian top seed Matteo Berrettini marked himself down as a genuine Wimbledon threat after beating Britain's Cameron Norrie 6-4, 6-7(5), 6-3 to win the Queen's Club title on Sunday.

The 25-year-old used his huge serve and forehand to great effect once again to claim his fifth career title and become the first Italian champion at the prestigious event.

Berrettini banged down his 19th ace as he served for the match and claimed victory on his first match-point.

The world number nine did not drop serve since the first round and held 46 service games in a row.

World number 41 Norrie dug deep to take the match to a deciding set but faltered at 3-4 in the deciding set as he became Berrettini's third British victim of the week.

He also beat five-time champion Andy Murray and Dan Evans on his way to the final on his tournament debut.

Norrie dropped serve with a double fault in the six game of the opening set to hand Berrettini the momentum.

Berrettini was close to winning in straight sets when he had break points at 4-4 in the second but Norrie hit back superbly to even up the match by winning the tiebreak.

It was only a temporary hiccup for Berrettini, however, as he powered through the decider to become the first debutant to win the title at Queen's Club since Boris Becker in 1985.

Becker went on to win Wimbledon a few weeks later and Berrettini will head to the All England Club with high hopes of a deep run. 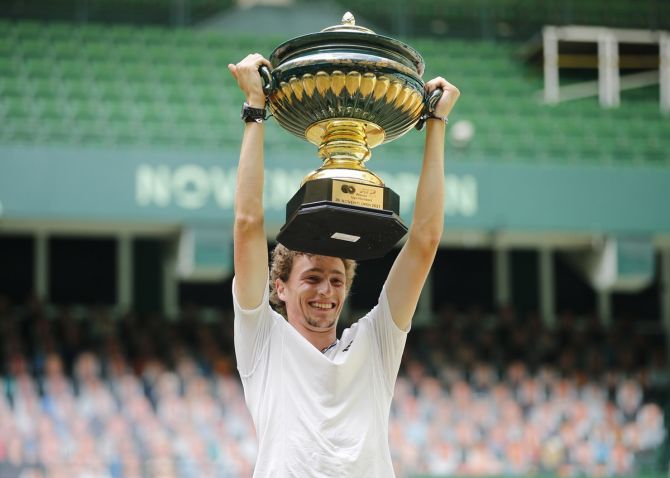 IMAGE: France's Ugo Humbert poses with a trophy after beating Russia's Andrey Rublev in the final of the Halle Open on Sunday. Photograph: Leon Kuegeler/Reuters

France's Ugo Humbert pulled off a surprise 6-3, 7-6(4) win over world number seven Andrey Rublev to claim his maiden ATP 500 title on the Halle grasscourts on Sunday.

Humbert stepped up his Wimbledon preparations by producing a clinical display, winning 85 percent of his first-serve points and hitting nine aces to extend his perfect record in ATP tour finals to 3-0.

After a fairly even start to the match, Humbert took control with his blistering forehands to break his fourth-seeded Russian opponent for a 5-3 lead.

Humbert, ranked 31st in the world, went on to save two break points to close out the set before both players struggled to gain an upper hand in the second set.

Both players entered the second-set tiebreak without facing a single break point but it was Humbert who took his opportunities at the net to secure victory in just under 1-1/2 hours.

Despite the defeat, Rublev will rise up to third in the Race to Turin for a place in the ATP Finals in November. The 23-year-old is only behind world number one Novak Djokovic and Stefanos Tsitsipas.