David Beckham had a hand in both goals as the L.A Galaxy beat the New York Red Bulls 2-1 on Thursday to book a place in Major League Soccer's Western Conference final, where they will face Real Salt Lake.

Trailing 1-0 from the first leg, New York levelled the tie on aggregate in just the fourth minute when English striker Luke Rodgers latched on to a superb through ball from former France striker Thierry Henry and slotted home.

Rodgers, who had been at the centre of a war of words between the two teams in recent weeks, was immediately booked after a wild challenge on Beckham and was lucky to stay on the field after he aggressively kicked the ball into the crowd.

The Red Bulls will have been disappointed with the way they allowed L.A to restore their advantage with a Beckham corner being headed in by diminutive midfielder Mike Magee -- who scored the only goal in the first leg. 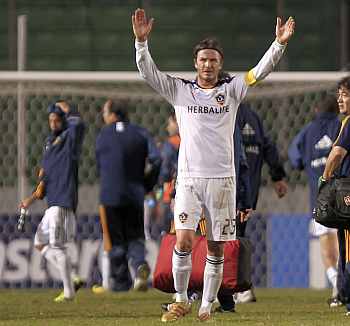 Rodgers went close to another goal after the break when he burst in on the left but his shot struck the side-netting and Henry was booked as New York struggled to maintain their first half tempo.

The Galaxy got in front on the night from the penalty spot after Beckham, with his back to goal, was needlessly fouled in the area by Roy Miller and Galaxy skipper Landon Donovan, who had a quiet night, converted the spot kick to ensure a 3-1 aggregate victory.

Former England captain Beckham is in the final year of his five-year deal with the Galaxy and still searching for his first MLS title.

The Galaxy, who finished with the best regular season record in MLS, have home field advantage against Salt Lake on Sunday and, if they get through that test, they then also play the final, on Nov. 20, at their own venue.

The Eastern Conference final will be between Sporting Kansas City and the Houston Dynamo after the Texan side earlier enjoyed a 1-0 win over the Philadelphia Union to also secure a 3-1 victory on aggregate.

A 45th minute header from Brian Ching allowed Houston to reach their fourth conference final in the past six years.

Ching nodded in a perfect glancing header on the stroke of halftime, rising to meet a curling free-kick from Brad Davis.

The game was a scrappy encounter played on a poor surface in what was Dynamo's last game at Robertson Stadium before they move to their new, purpose-built arena in downtown Houston next season.