As the superlatives rained down on treble-winning Bayern Munich on Sunday, it was difficult to see where the all-conquering Bavarians could find room for new signing Mario Goetze and, if speculation turns out to be true, Robert Lewandowski.

One of the most striking aspects of Bayern Munich's season has been the way coach Jupp Heynckes has managed to rotate a squad brimming with international players without a murmur of dissent. 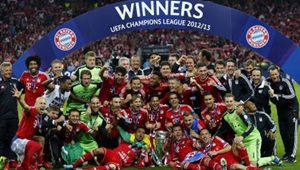 When they have been given a chance, they have proved just as deadly as the first choice players, with Gomez scoring 19 goals in all competitions despite playing second fiddle to Mario Mandzukic.

"The team spirit has been decisive," Heynckes told reporters after his side beat VfB Stuttgart 3-2 in Saturday's German Cup final to complete an unprecedented treble.

"The players have stood together and supported each other," added the 68-year-old, who will make way for former Barcelona supremo Pep Guardiola.

French winger Franck Ribery agreed: "I have never experienced so much harmony at Bayern Munich, it was really an exceptional year."

Heynckes has repeatedly emphasised that Bayern's transformation from three-times runners-up last season to treble winners this term has been due to the players they brought in.

Javi Martinez, signed from Athletic Bilbao for a Bundesliga record fee, has beefed up the midfield and given them an alternative to Bastian Schweinsteiger, whose injuries last season greatly hampered Bayern.

Brazilian defender Dante has been a pillar of the defence which was breached only 18 times in the Bundesliga this season.

In attack, Mandzukic has given lessons in how to play as a lone centre-forward with his ability to hold up the ball, burst down the flank and create chances, as well as score goals.

Shaqiri, signed from FC Basel, has slotted in impressively on the rare occasions he has been given a start while Pizarro, the third choice striker, scored four goals in the 9-2 rout of Hamburg SV and a 15-minute hat-trick in the Champions League match against Lille.

Yet none of those signings were the sort that raises eyebrows. Instead, they were hand-picked to plug the holes which cost Bayern three trophies last season.

Pizarro is in the twilight of his career, Dante came from Borussia Moechengladbach and only won his first Brazil cap after his move to Bayern, Mandzukic was unwanted by VfL Wolfsburg and Xhaqiri is an inexperienced, though highly promising, Swiss 21-year-old.

Even Martinez, with his huge price tag, was not well known in Germany and is not a regular for Spain.

"Every day last summer, Heynckes rang me up at 10 o'clock in the morning to talk about transfers," chief executive Karl-Heinz Rummenigge said.

The same thought does not appear to have gone into signing of Goetze and the widely reported attempt to lure his Borussia Dortmund team mate Robert Lewandowski to Bavaria.

The announcement in April that Goetze would move from Dortmund, where he was raised, to Bayern, sent shockwaves through German football but there was little reflection on how the 20-year-old, a nimble-footed dribbler rather in the mould of Shaqiri, would fit in.

Poland's Lewandowski is a prolific scorer, yet Bayern are more than well-served in that position with Mandzukic, Gomez and Pizarro. There is also the question of how the Bayern squad would welcome two players from their bitterest rivals.

Guardiola may have to start his new job by performing a delicate balancing act.

It will also be interesting to see how the Spaniard copes with Bayern's array of high profile directors, such as Rummenigge, president Uli Hoeness and honorary president Franz Beckenbauer, who are quick to air public criticism in the Bild tabloid when they are not happy.

If he succeeds, Guardiola will also have to get used to being doused with wheat beer by his players as Heynckes was on Saturday.

"That's something I won't miss," said Heynckes, his clothes soaked in the liquid. "It smells awful."

Image: Bayern Munich players and staff celebrate with the trophy after winning the Champions League final

© Copyright 2021 Reuters Limited. All rights reserved. Republication or redistribution of Reuters content, including by framing or similar means, is expressly prohibited without the prior written consent of Reuters. Reuters shall not be liable for any errors or delays in the content, or for any actions taken in reliance thereon.
Related News: Bayern Munich, Mario Mandzukic, Jupp Heynckes, Claudio Pizarro, Xherdan Shaqiri
SHARE THIS STORYCOMMENT
Print this article 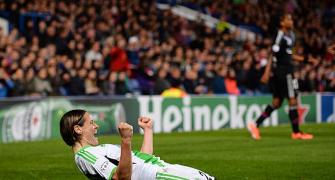 Best SPORTS PHOTOS of the week! 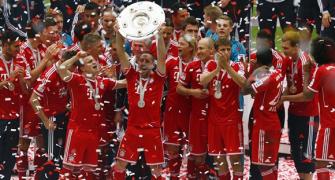 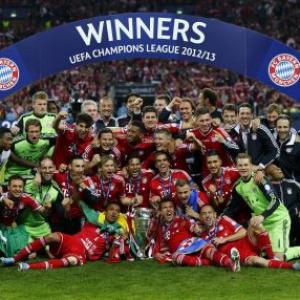 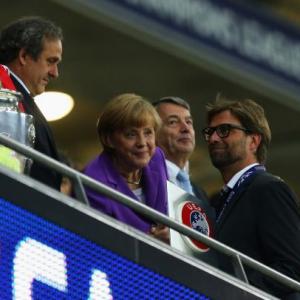 Klopp looks on bright side despite Dante let-off