Mario Gomez scored a hat-trick against his former club to give champions Bayern Munich a 5-3 win at error-prone Stuttgart in the Bundesliga on Sunday.

Bruno Labbadia, making his league debut as Stuttgart's third coach of the season, watched in disbelief as a comedy of errors helped Bayern go 5-1 up in under an hour before his side staged a late fightback.

With Franck Ribery and Thomas Mueller scoring the other goals, Bayern went into the winter break fifth in the table with 29 points, 14 behind leaders Borussia Dortmund.

Stuttgart, one off the bottom with 12 points, faced angry protests from their fans as they left the pitch.

"That shouldn't happen, those fans should support the players," said Bayern coach Louis van Gaal in a touchline interview.

Earlier, Bayer Leverkusen missed a chance to regain second place when they were held 2-2 at home by Freiburg. Instead, they went into the break in third spot, behind Mainz 05 on goal difference and 10 points behind the leaders.

Dortmund lost 1-0 at Eintracht Frankfurt on Saturday, missing the chance to set a points record for the first half of the season and ending a run of eight away wins in a row.

Labbadia began his stint with a 5-1 win over Odense in the Europa League last Thursday and saw Stuttgart make a promising start on Sunday, creating several good chances early on, only to fall apart as they conceded three goals in 12 minutes.

The trouble began in the 31st minute when Ermin Bicakcic lost the ball to Thomas Mueller and he slipped it to Gomez, who fired past Sven Ulreich into the roof of the net.

Gomez pounced on more poor defending to return the compliment as he set up the second for Mueller five minutes later and Frenchman Ribery, given far too much space, added the third two minutes before the break with a 25-metre shot.

Halftime substitute Martin Harnik pulled one back for Stuttgart in the 50th minute but it quickly got worse.

Two minutes later, Ulreich fumbled a simple Ribery ball and Gomez, who spent five seasons at Stuttgart before joining Bayern last season in a move which made him the Bundesliga's most expensive player, snapped up the rebound.

Another two minutes later, Gomez took advantage of more slapstick defending to slide home the ball and looked almost too embarrassed to celebrate.

It was his third hat-trick of the season, two in the Bundesliga and one in the Champions League.

Stuttgart threatened to make a game of it as Harnik pulled another back in the 65th minute and Christian Gentner curled in the third five minutes later.

"I'm always happy when we score, but when we give goals away, that shouldn't happen, it is something we must improve upon," said Van Gaal.

"I set us a target of 30 points by the mid-way point and we haven't done that, but other teams have lost points."

Patrick Helmes came on in the 69th minute for Leverkusen, had a goal disallowed and then scored a 75th minute equaliser to give them a point against Freiburg in Sunday's other game.

Chile midfielder Arturo Vidal put Leverkusen ahead when he converted a penalty in the 16th minute but Jan Rosenthal equalised eight minutes later. In driving snow, Reisinger then put Freiburg ahead in the 65th minute.

© Copyright 2021 Reuters Limited. All rights reserved. Republication or redistribution of Reuters content, including by framing or similar means, is expressly prohibited without the prior written consent of Reuters. Reuters shall not be liable for any errors or delays in the content, or for any actions taken in reliance thereon.
Related News: Stuttgart, Mario Gomez, Bayern Munich, Thomas Mueller, Freiburg
SHARE THIS STORYCOMMENT
Print this article 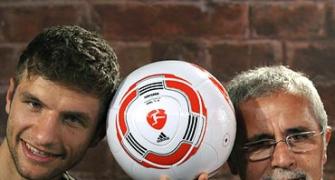 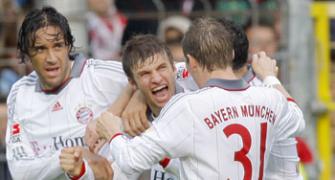 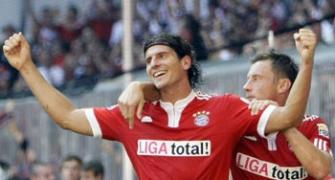