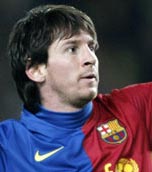 The award's 96 jurors gave Messi 473 points out of a possible 480, a near unanimous verdict, the magazine said.

Messi becomes the first Argentine to win the award - opened to non-European nationals 15 years ago with Liberia's George Weah the first non-European winner.

Brazilian Kaka, who won two years ago, came in sixth this year with just 58 points.

Fernando Torres was 11th and Arsenal's Cesc Fabregas was 12th. Thierry Henry, another of Messi's Barca colleagues and who has never won the award, came in 15th.

The win caps a brilliant year for the soft-spoken left-footer, who helped Barcelona to a UEFA Champions League title with nine goals, as well as bagging six in the King's Cup and 23 in the league.

The gong, formerly known as the European Footballer of the Year award, was voted on by journalists from across the world.