Barcelona are in talks to strengthen their championship-winning squad with Arsenal midfielder Cesc Fabregas and Valencia striker David Villa, according to club vice president Rafael Yuste.

Talks with Valencia on Villa's transfer "are on the right track," Yuste said in an interview with Catalan radio station Ona FM quoted by Spanish news agency EFE.

Bringing Arsenal captain Fabregas back to Barca, where he was a youth player, is "more complicated because lengthy negotiations with his club lie ahead", Yuste added.

"But both players want to come and that makes everything easier," he said.

An Arsenal spokesperson said the Premier League club never commented on transfer speculation with a Valencia spokeswoman adding that the La Liga club had no immediate comment.

Fabregas is currently recovering from a cracked bone in his right leg and should be fit to help European champions Spain in their bid for a first World Cup triumph in South Africa starting next month.

If he moved back to Barca, the 23-year-old, who has several years left on his Arsenal contract, would join international team mates Xavi and Andres Iniesta in the La Liga champions' midfield.

Reports of his imminent move to the Catalan capital have led to speculation Swedish striker Zlatan Ibrahimovic, who joined from Inter Milan last year, will be sold on after failing to live up to expectations this season.

Villa said at the weekend he was happy in Valencia and committed to the club, who finished a distant third in La Liga and qualified for the Champions League, and he did not want to be distracted during the World Cup.

"I'm not going to be waiting expectantly to see what happens. I have learned my lesson," Villa told Spanish television station Canal 9 .

"I have a four-year contract with Valencia with a big buy-out clause, I'm happy and committed to the project here," Villa added. "I don't think the club would want to sell me unless it was necessary."

Yuste also hinted that French forward Thierry Henry could be on his way to a club in the United States.

The France captain and Barca had to "put the finishing touches (to a deal) so that both are happy", he told Ona FM.

Barca director general Joan Oliver said on Monday reports that Henry would sign for a Major League Soccer (MLS) side "were not completely wrong".

© Copyright 2022 Reuters Limited. All rights reserved. Republication or redistribution of Reuters content, including by framing or similar means, is expressly prohibited without the prior written consent of Reuters. Reuters shall not be liable for any errors or delays in the content, or for any actions taken in reliance thereon.
Related News: Valencia, David Villa, Barca, Cesc Fabregas, La Liga
COMMENT
Print this article 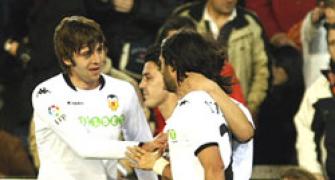 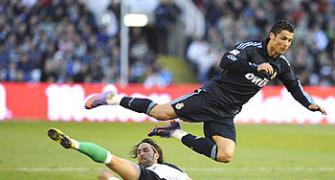 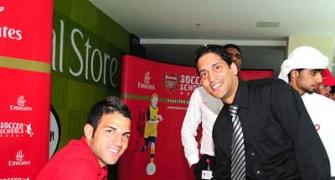