Barca to fight UEFA fine with all legal means

Barcelona have vowed to use all legal means to fight a second fine imposed by UEFA after fans displayed pro-Catalan independence flags during September's Champions League Group E match at home to Bayer Leverkusen. 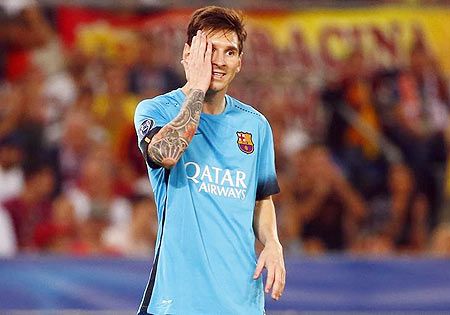 Barca were already fined 30,000 euros ($33,963) by European soccer's Swiss-based governing body in July after supporters waved the flags, known as "Esteladas", and chanted pro-independence slogans at the Champions League final in Berlin.

UEFA's Control, Ethics and Disciplinary Body ruled the club had breached article 16 (2) (e) of the regulations, which prohibits "the use of gestures, words, objects or any other means to transmit any message that is not fit for a sports event, particularly messages that are of a political, ideological, religious, offensive or provocative nature".

Jordi Mestre, a Barca vice president, told reporters on Monday the club would appeal the latest UEFA sanction of 40,000 euros and would take their legal fight to the European Court of Human Rights in Strasbourg if necessary.

"We will appeal to UEFA, to the Court of Arbitration for Sport (CAS), if necessary to the ordinary Swiss courts and if needed we will go to Strasbourg," Mestre told reporters in Minsk where Barca are preparing for Tuesday's Champions League match against BATE Borisov.

"We will continue to defend the interests of the club and we'll see what happens, we are not in the least happy," he added.

"We will follow the process set out by UEFA, we will not wage a war but defend the club's interests. We will never allow a limit on people's freedom of expression."

Barca, whose motto is "more than a club", has long been an outlet for fans who support Catalan independence from Spain to express their beliefs.

Supporters of the club were criticised by politicians from Spain's ruling People's Party (PP) after they whistled the national anthem at the King's Cup final at the end of May.

© Copyright 2022 Reuters Limited. All rights reserved. Republication or redistribution of Reuters content, including by framing or similar means, is expressly prohibited without the prior written consent of Reuters. Reuters shall not be liable for any errors or delays in the content, or for any actions taken in reliance thereon.
Related News: UEFA, Barca, Court of Arbitration for Sport, European Court of Human Rights, People's Party
COMMENT
Print this article