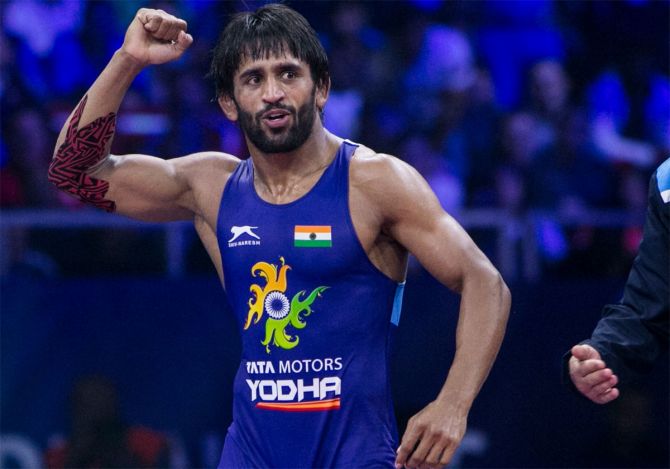 IMAGE: Bajrang Punia was trailing 0-2 till the final moments of the 65kg final against Mongolia's Tulga Tumur Ochir, before the Indian managed to level the scores 30 seconds from the whistle.

Tokyo-bound Indian wrestler Bajrang Punia pulled off a two-pointer in the last 30 seconds of the gold medal bout to defend his title at the Matteo Pellicone Ranking Series event in Rome, while he also clinched the world number one ranking.

Up against Mongolia's Tulga Tumur Ochir, Bajrang was trailing 0-2 till the final moments of the 65kg final but managed to level the scores, 30 seconds from the whistle.

Since the last scoring point came from the Indian he was declared the winner on criteria on Sunday night.

Bajrang seems to have improved upon his leg defence in the one-year break, forced by the coronavirus pandemic.

The Indian was placed second in the rankings before the event and is now on top of the ranking table in the 65kg category with 14 points.

The fresh rankings are based on results of this tournament only. So whoever gets on top of the podium will be ranked number one in the world.

Vishal Kaliramana too impressed in the non-Olympic 70kg category by winning a bronze with a 5-1 win over Syrbaz Talgat from Kazakhstan.

Meanwhile, Narsingh Pancham Yadav, who recently made a return to competitive wrestling after a four-year doping ban, lost his bronze play-off 0-5 to Kazakhstan's Daniyar Kaisanov.

He though, impressed with his power and temperament.

India returned with seven medals from the first Ranking Series event in a year with Vinesh Phogat and Sarita Mor winning gold and a silver respectively in the women's event.