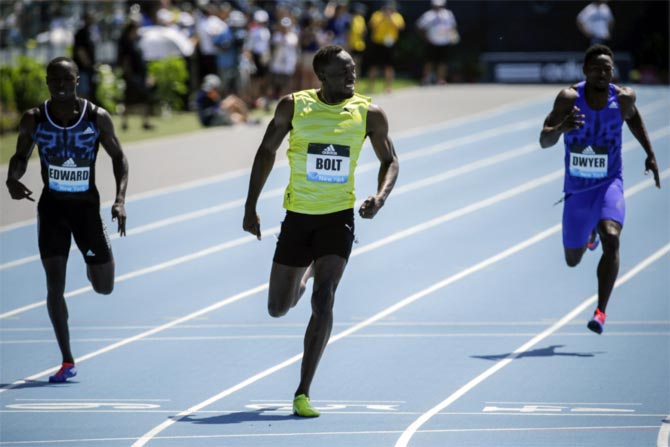 A baffled Usain Bolt ran his worst turn ever as he barely won the 200 metres at the Adidas Grand Prix meet in a sluggish 20.29 seconds on a warm, windy day at Randall's Island in New York, on Saturday.

Bolt was running into a stiff headwind of 2.8 metres per second that surely affected his time, but the six-time Olympic gold medal winner was bewildered by his sub-standard turn.

His time was more than a full second slower than his world record of 19.19.

The 28-year-old Jamaican, who also holds the world record in the 100 metres, failed to show his legendary runaway burst of speed and only just held off second-placed Zharnel Hughes of Anguilla, who timed 20.32.

"I'm not happy about my performance today. My turn was horrible, I don't know what happened," Bolt said. "My worst turn ever."

Bolt said the turn affected the rest of his race, run in front of a packed grandstand filled with fans from his homeland.

"After I came off the turn, I knew it wasn't going to be fast ... so I pretty much just wanted to get home. I didn't really stress it too much."

He had hoped to break 20 seconds in the race as he aimed to build towards this year's Beijing world championships in August after a 2014 season limited by injuries.

In other featured races in the Diamond League meet, world record holder David Rudisha of Kenya, who pulled up early in his last race, ran easily in winning the 800 metres in 1:43.59, three-hundredths of a second shy of the year's best.

Cuban triple jumper Pedro Pablo Pichardo, whose 18.08m in Havana was third longest ever, won with 17.56 ahead of American Olympic silver medalist Will Claye with 16.96.

"My start wasn't great and I feel bad because we've been working on it," said former double world champion Gay, striving to find top form after serving a one-year doping suspension. "I ran like poop in the meet, so I'm still working on it."

Fabiana Murer of Brazil, pointing towards next year's Rio Olympics, repeated her New York victory of a year ago by winning a high-calibre women's pole vault by clearing 4.80 metres with fewer misses than Nikoleta Kyriakopoulou, of Greece.

© Copyright 2020 Reuters Limited. All rights reserved. Republication or redistribution of Reuters content, including by framing or similar means, is expressly prohibited without the prior written consent of Reuters. Reuters shall not be liable for any errors or delays in the content, or for any actions taken in reliance thereon.
Related News: Usain Bolt, Pedro Pablo Pichardo, Jamaican Nesta Carter, New York, Nikoleta Kyriakopoulou
SHARE THIS STORYCOMMENT
Print this article