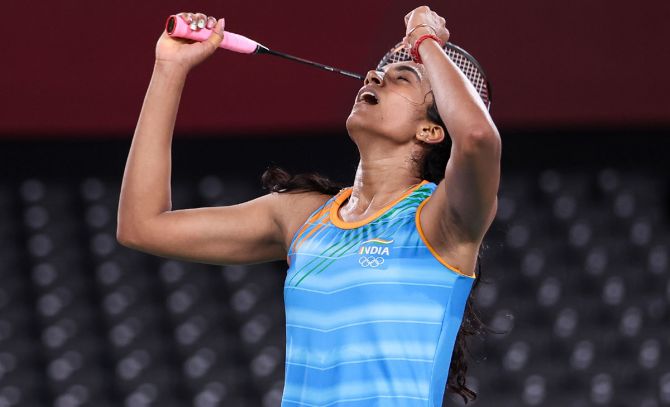 IMAGE: This is PV Sindhu's third final appearance in the season-ending tournament. She had won the title in 2018 to become the only Indian to achieve the feat. Photograph: Lintao Zhang/Getty Images

India's badminton ace P V Sindhu entered the summit clash of BWF World Tour Finals with a hard fought win over Akane Yamaguchi of Japan in the semi-finals, in Bali, on Saturday.

Sindhu, the reigning world champion and two-time Olympic medallist, beat Yamaguchi 21-15, 15-21, 21-19 in a thrilling match that lasted one hour 10 minutes.

She will face Korea's An Seyoung, who beat Pornpawee Chochuwong of Thailand 25-23, 21-17 in the other semi-final, in Sunday's final.

It will be Sindhu's third final appearance in the season-ending tournament. She had won the title in 2018 to become the only Indian to achieve the feat.

The World No 7 Indian had come into the match with an overall head-to-head win-loss record of 12-8 against the world number three Japanese.

Sindhu has been in fine form after picking up a bronze in the Tokyo Olympics. She had reached the semifinals in her last three events -- French Open, Indonesia Masters and Indonesia Open -- before coming into the BWF World Tour Finals.

She had finished runner-up in the Swiss Open in March.

But it won't be easy for Sindhu in the final against Seyoung who had come into the season-ending tournament with back-to-back titles in the Indonesia Masters and Indonesia Open.

The World No 6 Seyoung had also beaten Sindhu in the quarterfinals of the Denmark Open in October.

Against Yamaguchi, Sindhu trailed 0-4 in the first game but quickly came to level terms at 4-4 and then 9-9. The duo were neck and neck but Sindhu zoomed ahead from 15-14 to reach 18-15. She then took three straight points to pocket the first game.

The second game was also a tight contest as the two players were levelled at 10-10 before Yamaguchi shifted the gear to pocket it without much fuss.

In the deciding game, Sindhu and Yamaguchi were tied at 5-5 before the Indian reeled off seven straight points. The Japanese made a sort of comeback by narrowing down the gap to 11-13 but Sindhu cruised to 17-12.

Yamaguchi was not the one to throw the towel without a fight and took the scoreline to 19-19. But Sindhu saved the best for the last as she won two consecutive points to win the third game and pocket the match.

Young Indian shuttler Lakshya Sen will face reigning Olympic champion and World No 1 Viktor Axelsen of Denmark in the men's singles semi-finals later in the day.

Axelsen will face Kunlavut Vitidsarn of Thailand in the men's singles summit clash on Sunday. The Thai shuttler, a three-time junior world champion, defeated All England champion Lee Zii Jia 21-18, 21-18 in the first semi-final of the men's event. 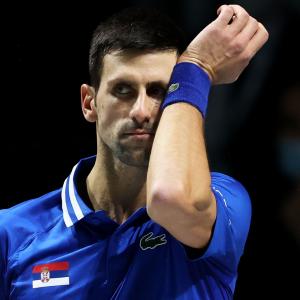