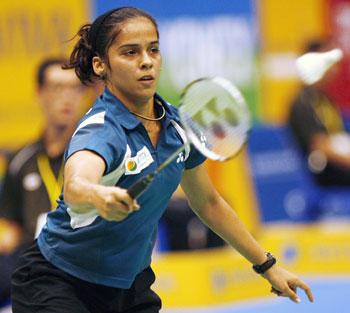 Malaysia's Mew Choo Wong is the other semi-finalist from Group A.

The mixed doubles pair of Jwala Gutta and V Diju also brought smiles to the Indian camp after winning their important encounter against the Thai combo of Songphon Anugritayawon and Kunchala Voravichitchaikul, 21-12, 21-8, in just 20 minutes.

However, the pair's fate hinges on the result of the match between the English pair of Anthony Clark and Donna Kellogg and Indonesian combo of Hendra Aprida Gunawan and Vita Marissa.

Saina had a disastrous start to her campaign in the tournament, going down to Wong in her first match. But the 20-year-old bounced back in remarkable style, notching two straight wins against Canadian Charmaine Reid, on Thursday, and Prontip.

Against Prontip, the Hyderabadi was in brilliant form in the first game and after opening up a 6-3 lead, did not allow her opponent to come back.

In the next game, Prontip stepped up the gas and fought bravely to run neck-and-neck from 1-1 to 16-16 before the Indian surged ahead to close the issue. 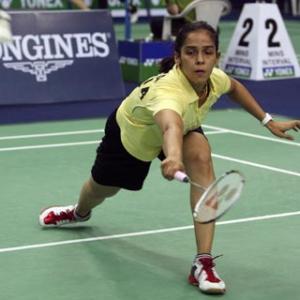