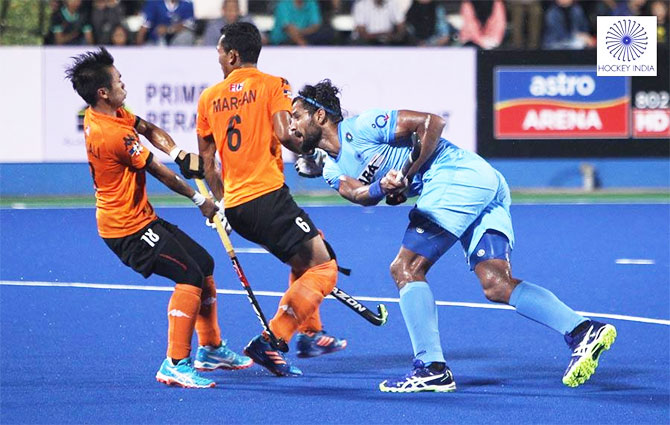 IMAGE: India's Rupinderpal Singh in action during the match against Malaysia during their Azlan Shah match at Ipoh, Malaysia, on Friday. Photograph: Hockey India/Facebook

A listless India slumped to a heart-breaking 0-1 defeat to hosts Malaysia in their last league match as they failed to reach the final of Sultan Azlan Shah Cup hockey tournament for the second consecutive year in Ipoh, Malaysia on Friday.

Needing to win by a two-goal margin to make the final after Great Britain had edged past New Zealand 3-2 earlier in the day, India failed to produce a cohesive game and suffered their second loss of the tournament.

Finishing with seven points from five matches, India will play New Zealand on Saturday in the play-off for the bronze medal, while the title encounter will be between defending champions Australia and Great Britain.

An Indian victory by two goals would have pushed the British team to the bronze medal game, but Malaysia turned the tables on India who gave a disjointed exhibition of hockey.

In the day of the underdogs, World No. 16 Japan pulled off a most stunning upset with a 3-2 victory over reigning world champions Australia, who still remained on course to defend their title by topping the standings roster due to their superior goal difference.

Australia have won the Sultan Azlan Shah Cup nine times, while Great Britain are in the final after 23 years. The Britons won the title in their lone entry into the final in 1994.

Despite knowing what was expected from them, India failed to make an impression on the Malaysian defence.

Malaysia made two early forays into the Indian circle, but were thwarted by the defenders. A penalty corner awarded to Malaysia in the ninth minute was reversed after video referral by India.

In the second half, Malaysia were awarded their second penalty corner on an appeal for video review.

Indian defenders fell back to thwart a combined Malaysia raid in the 20th minute. Soon after, Talwinder Singh's shy at the other end was saved by the Malaysian custodian.

A combined move between Talwinder and Akashdeep on the left flank had Malaysian defenders falling back to crowd the goalmouth. Two successive penalty corners failed to make an impression on the Malaysian defence.

India showed more purpose in the second half, but their attack was not cohesive and the strikers turned out to be error-prone after reaching the top of the circle.

India's desperation was evident at the start of the last quarter when they took off the goalkeeper and made Harmanpreet Singh the kicker-back.

The goalkeeper was back within a minute when Manpreet Singh was sent off with a green card. But as Manpreet came back in the 47th minute, so did the kicker-back come in.

Having an extra player added just a little bit of thrust to the Indian effort, but it was Malaysia that opened the scoring in the 50th minute with a penalty corner conversion through Shahril Saabah's measured drag-flick to the right of the goalkeeper.

Going all out in search of goals, India made three forays into the rival circle in the last four minutes and even earned two penalty corners, but the Malaysians stoutly defended their citadel.

Great Britain opened the account with a penalty corner conversion by Sam Ward in the ninth minute, only to see New Zealand equalise through an open play strike by Dominic Newman in the 30th minute.

The Britons surged to a 3-1 lead after field goals by Phil Roper (39th minute) and Mark Gleghorne (49th).

New Zealand took off their goalkeeper to add an extra player upfront and managed to earn a penalty corner in the 58th minute that was converted by Russell.

In another match of the day, Koji Yamasaki's two late goals (56th and 57th minutes) were the feature of Japan's stupendous victory over Australia after Shota Yamada (44th minute) started the fightback with a penalty corner conversion.

Australia's earlier strikes by Jeremy Edwards (seventh minute) and Trent Mitton (31st) were not enough against the rank outsiders.