Chief coach Harendra Singh said the 3-1 victory over Great Britain in the Azlan Shah hockey tournament on Friday has injected life into the Indian team's campaign following the debacle against South Korea.

"This was a much-improved performance, as you could see; it's put us back into the tournament," said Harendra.

"The performance came through a much stable defence with Dhananjay Mahadik back after missing almost half of yesterday's game due to injury," he added.

- Shoot-out to be tried in Azlan hockey

"The team showed more confidence all around, in the moves and switching the ball around. And, more importantly, the penalty-corner goals kept coming."

He was all praise for young deep defender Rupinder Pal Singh, who scored a hat-trick with low penalty-corner flicks that surprised the British goalkeeper.

"Rupinder is an intelligent player, not just in taking penalty-corners, but he's a good denfender overall. He has the potential to become an exceptionally good penalty-corner taker, and he showed it with the three goals today," Harendra said.

"He may not have got the opportunity in Sandeep's presence, but took the chance that came his way."

England's coach Jason Lee, a former Olympian, said he was disappointed "at the way the boys played today".

"We expected tough matches like this and that's the reason we are here playing in this tournament, but I did not expect some of my players not performing at all today," said Lee.

He said Britain's show was nowhere near its performance against Malaysia on Thursday, when they won 3-1.

"We have no specific target for this tournament other than playing quality matches, but the technical aspect of our game wasn't good today," he said. 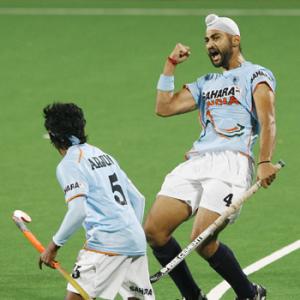