'In the event the sporting event cannot be avoided, the same could be done without allowing gathering of people, including spectators.' 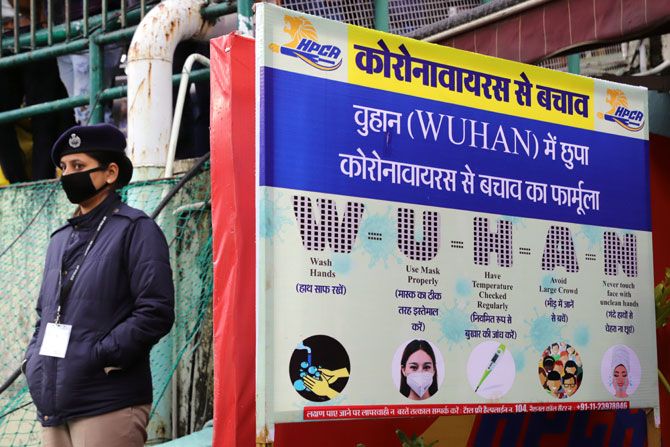 IMAGE: A coronavirus information banner is seen at the HPCA stadium in Dharamsala on Thursday, as a female police officer keeps watch during the first ODI between India and South Africa. Photograph: BCCI

The money-spinning Indian Premier League has mulled a closed-door edition in a desperate bid to avoid cancellation as the deadly COVID-19 sent Indian sport into quarantine after a government directive for fans to be kept away from all action to prevent the pandemic from spreading.

"...ensure that no public gathering takes place in any sporting event. In the event the sporting event cannot be avoided, the same could be done without allowing gathering of people, including spectators," read an order from the Sports Ministry, which caused quite an upheaval through the day.

The directive ensured that the remaining two ODIs between India and South Africa, in Lucknow and Kolkata, the Indian Super League football tournament final in Goa, and the last day of the Ranji Trophy summit clash in Rajkot will be played in front of empty stadia, an unprecedented turn of events in Indian sport.

On the IPL, the Board of Control for Cricket in India maintained stoic silence, but the Sports Ministry dropped enough hint that the glitzy T20 tournament could be held in empty venues too due to the health crisis even as foreign players were ruled out till April 15 following government-imposed travel restrictions. The event is due to start on March 29 in Mumbai.

The Ministry of External Affairs also advised the BCCI "not do it at this time but if the organisers want to go ahead, it is their decision".

In another major development, the All India Football Federation said that the remaining 28 matches of the I-League, including the marquee Kolkata derby between champions Mohun Bagan and East Bengal, are likely to be played in empty stadia.

This came a day after organisers of the India Open badminton, starting March 24, decided spectators will not be allowed this year. 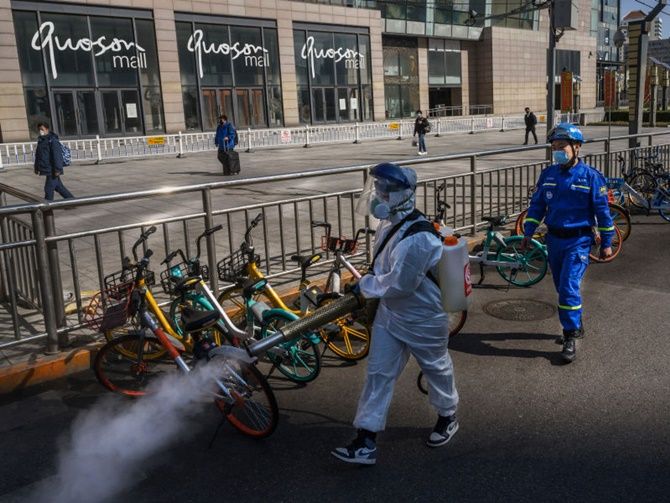 IMAGE: The government suspended all visas in an attempt to prevent the spread of coronavirus as cases across India rose to 60. Photograph: Kevin Frayer/Getty Images

The national tennis federation and the Paralympic Committee of India also decided to put on hold all national and state-level championships till April 15, keeping in mind government directions.

The Athletics Federation of India, on the other hand, withdrew invitations to foreign competitors for the Federation Cup but said that the event itself will go ahead in Patiala from April 10-13.

The IPL's fate will be up for discussion at the event's Governing Council meeting on Saturday and the BCCI has decided to adopt a wait and watch policy till then.

Sports secretary Radhey Shyam Julaniya said events can continue but without the presence of crowds.

"We have asked all the NSFs, including the BCCI, to follow the Health Ministry's latest advisory, which says public gatherings should be avoided in all events, including sporting activities," Julaniya said.

"The sporting events can go on but the advisory needs to be followed," he added.

The government, on Wednesday, suspended all visas, barring a few categories like diplomatic and employment, in an attempt to prevent the spread of coronavirus, as cases across India rose to more than 70.

The outbreak, declared a pandemic by the World Health Organisation (WHO) on Wednesday, has led to more than 4,000 deaths and left over 100,000 infected globally.

The shooting World Cup and the Indian Open golf tournament are so far the biggest events to have been postponed in the Indian sporting calendar.

Meanwhile, the Indian boxing team, returning from the Asian Olympic Qualifiers in Jordan, will be asked to stay "home-quarantined" even though all the members have got the necessary health clearances.

A total of 13 boxers and almost an equal number of coaching staff return on Thursday after clinching an unprecedented nine Olympic slots in the qualifiers which concluded on Wednesday in Amman.

"They will be asked to quarantine themselves at their homes or hostel rooms for a few days. They have, however, been given the necessary health clearances by the Jordanian Olympic association," Boxing Federation of India's Executive Director R K Sacheti informed.

The coronavirus outbreak has also led to speculation over the fate of the Tokyo Olympics this year. The International Olympic Committee (IOC), however, has insisted that the Games will be held as scheduled in July-August.

Elsewhere, the NBA cancelled the rest of the season after one player tested positive, the Spanish football league has been suspended for two weeks, the entire Real Madrid football team is in quarantine and in Pakistan the cricket board has decided to hold the remaining matches of the Pakistan Super League (PSL) behind closed doors.