A ruthless Rafael Nadal preserved his creaky knees for tougher tests down the road by routing Dominican journeyman Victor Estrella Burgos 6-1, 6-1, 6-1 to sail into the second round of the Australian Open on Monday.

Playing his first competitive match since pulling out of the ATP Tour Finals with knee trouble in November, the world number one showed no signs of early season rust as he tore through the evening match at Rod Laver Arena in one hour and 34 minutes.

The 31-year-old, who lost last year's final in a five-set classic with long-time rival Roger Federer, brought up three match points with a huge serve and closed out the match on the first when 37-year-old Estrella Burgos parried a return long. Swiss Belinda Bencic sent an early shockwave through the Australian Open, on Monday, by toppling last year's finalist Venus Williams on an opening day of carnage for American tennis.

With defending champion and new mum Serena absent, 20-year-old Bencic's brilliant 6-3, 7-5 win under the Rod Laver Arena roof ensured there would not be a Williams sister in the second round of the tournament for the first time in over 20 years.

For former world number seven Bencic, victory was another step on an impressive comeback trail from a wrist surgery that saw her tumble out of the top 300 last year before her return in September.

It was also a matter of felling a seven-time Grand Slam-winning idol, having never won a set against her in four previous matches.

"I think (before) I had a little bit too much respect, played a little bit careful and safe," Bencic, who was a toddler when Venus won her first grand slam at Wimbledon in 2000, told reporters.

"This time, I really tried to come out and, you know, hit it big. Also tactically be smart on the court."

Now ranked 78th, Bencic teamed up with Roger Federer to win the Hopman Cup for Switzerland in the lead-up and was thrilled to have the defending champion's parents watching from her players' box as she worked over Williams in less than two hours.

Federer's parents are used to seeing wins and Bencic did not disappoint, playing the 37-year-old American to perfection. 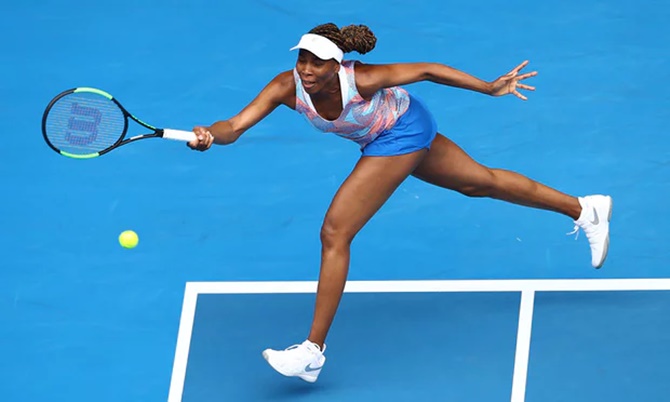 IMAGE: Venus Williams in action against Belinda Bencic during their first-round match at the Australian Open. Photograph: Cameron Spencer/Getty Images

Soaking up the fifth seed's firepower, she counter-punched brilliantly to seal the match with a pair of rasping forehand winners.

It had started as a slow-burning contest of short, sharp rallies but burst into life when Williams's serve crumbled in the seventh game.

The American fought desperately to level but Bencic saved five break points before rain halted play for some 15 minutes to allow the roof to close.

Upon resumption, Bencic laced a huge backhand down the line to finally consolidate, before breaking Williams to love and closing out the set with a crosscourt backhand.

Venus battled to keep touch in an enthralling second set but the clean hitting and younger legs of Bencic carried away the match in the 12th game.

Bencic advances to meet the winner of the first round encounter between Swede Johanna Larsson and Thai qualifier Luksika Kumkhum as she continues her ascent into the upper echelons of the women's game.

"I don't think I played a bad match," she said. "She just played above and beyond. I just have to give her credit for that." Home hope Nick Kyrgios launched his Australian Open campaign with a 6-1, 6-2, 6-4 demolition of Brazilian Rogerio Dutra Silva to continue his bright start to the year.

The volatile 17th seed was on his best behaviour and let his racket do the talking as he treated his fans in the Hisense Arena to an impressive opening salvo.

Kyrgios, one of nine Australian men to start in the main draw, is shouldering his nation's hopes of a first home men's champion since 1976 and could not have asked for a better start.

He wrapped up the opening two sets in 51 minutes and was never seriously troubled until the third set when the 100th ranked Dutra Silva provided some stiffer resistance.

Kyrgios, who was jeered by the home crowd last year when he lost a second-round match from two sets up against Italian Andreas Seppi, will face Serbia's Viktor Troicki next.

The 22-year-old warmed up for the Australian Open by winning the Brisbane title -- his first on home soil.

US Open champ Stephens tumbles out in first round 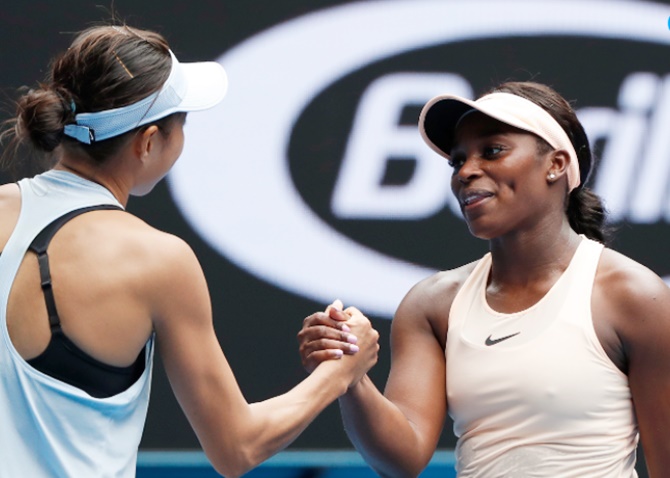 IMAGE: Zhang Shuai of China and Sloane Stephens of the US shake hands after Zhang won their match. Photograph: Issei Kat/Reuters

It also continued a bleak day for the United States, with three of their four women's semi-finalists from Flushing Meadows last year falling at the first hurdle.

Stephens became the first big casualty at this year’s Australian Open as the US Open champion tumbled out in the first round against China’s Zhang Shuai.

The American 13th seed, who is without a win since her triumph at Flushing Meadows, looked assured as she took the opening set but Zhang hit back to win 2-6, 7-6(2), 6-2 on Margaret Court Arena.

Stephens was not the only new member of the Grand Slam winners’ club in action, though French Open champion Jelena Ostapenko fared far better with 6-1, 6-4 defeat of Italian Francesca Schiavone in the first match on Rod Laver Arena.

Schiavone, who won the French Open in 2010, threatened to take the second set before Latvian Ostapenko, seeded seven, clicked back into gear to ease through.

Stephens was assured in winning the first set but Zhang, who reached the quarter-finals in 2016 as a qualifier, found her rhythm and after taking the second set on a tiebreak dominated the decider with her American opponent wilting in the face of the pinpoint accuracy of the world number 34.

Stephens, who withdrew from the Brisbane warmup event with a right knee injury, reached the semi-finals in Melbourne in 2013 but lost in the first round in 2015 and 2016 and missed out through injury last year. IMAGE: Denis Shapovalov of Canada reacts in his first round match against Stefanos Tsitsipas of Greece. Photograph: Michael Dodge/Getty Images.

Denis Shapovalov dazzled in pink as he claimed a debut victory over Greek newcomer Stefanos Tsitsipas in a battle of the teenagers at the Australian Open.

Shapovalov's colourful game, including a dreamy single-handed backhand, would look spectacular in any choice of kit, although the garish pink and black strip he wore made sure there was no mistaking him on a blustery Court Two.

Tsitsipas, who broke into the top 100 last year and reached the quarter-finals at the Qatar Open, could make little impression in the opening two sets but pushed Shapovalov hard in the third, breaking back to take it into a tiebreak.

Shapovalov crunched away a smash on his first match point though to set up a likely second-round clash with Frenchman Jo-Wilfried Tsonga, who was in action later on Monday.

Shapovalov's first year on the circuit began last season began in ignominious circumstances when he was defaulted in a Davis Cup title against Britain's Kyle Edmund after slamming a ball in frustration and hitting the chair umpire in the eye.

The Israel-born teenager has rebounded in style, however.

He reached the semi-finals of the Montreal Masters, beating world number one Rafael Nadal, before winning his first grand slam match at the U.S. Open, where he made round four.

One of a bunch of fast-rising young guns looking to make their mark in Melbourne, Shapovalov said he expected many more battles with Tsitsipas in the future.

"I'm going to win some and lose some," he told reporters. "I managed to play better today. Maybe I have a little more experience after my run at the US Open and definitely today I felt comfortable, whereas he looked a bit tight early on."

"I definitely feel I'm on top of my game." Coco Vandeweghe's petulant standoff over a shortage of bananas was the low point on a horror day for the United States at the Australian Open on Monday as a raft of American players skidded out of the season's first Grand Slam in the first round.

Vandeweghe was given two code violations during her stormy 7-6(4), 6-2 defeat by Hungarian Timea Babos at the Hisense Arena.

The first came after she refused to restart play at the end of the first set until a ball-kid delivered her bananas. "How are they not on court? I mean, c’mon, that’s not my fault,” she said during an argument with the chair umpire.

"Why do I have to play under a different set of rules? I don’t have to make myself uncomfortable because it’s ill prepared."

“I have needs and it’s not my fault that this court is ill prepared."

The American was docked a point toward the end of the second set after appearing to curse at 51st-ranked Babos.

Vandeweghe told media she was not happy about Babos getting "in her face" but the Hungarian denied trying to rile her up.

"She always does that (loses her temper),” Babos said.

“A couple of racquets are broken every match, this time it was I believe a time violation, but I’m not sure."

"The second one I believe was an insult against me. If the umpire heard it then it must have been this." The world number 49 twice needed to come from a set down to force a deciding fifth set, where again he battled back from a break down to set up a second round clash with Uzbek Denis Istomin.

Big-serving South African Anderson sent down his usual barrage of aces and showed no shortage of fight himself but was ultimately undone as Edmund fired back winner after winner.

The 23-year-old Briton had treatment on his right shoulder in the fifth set but showed no signs of any injury in the closing stages, sealing his victory with another thunderous forehand winner.

Dimitrov schools Novak to reach second round at a canter 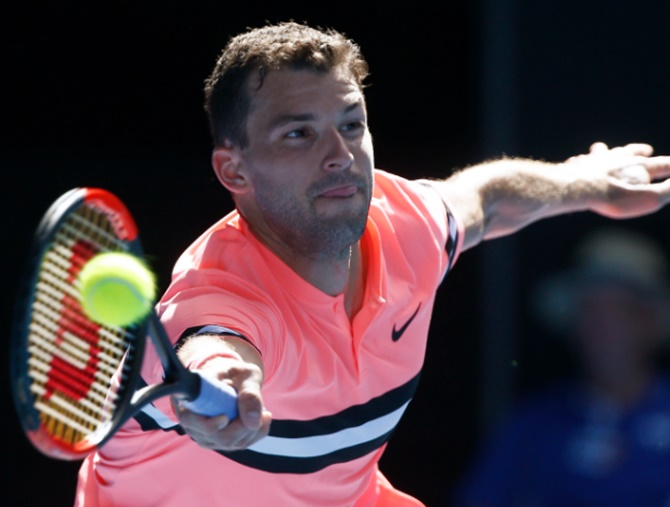 Grigor Dimitrov gave qualifier Dennis Novak a lesson in Grand Slam tennis to reach the second round of the Australian Open at a canter with a 6-3, 6-2, 6-1 victory.

The Bulgarian third seed, a semi-finalist at Melbourne Park last year, displayed his full range of skills to oust his Austrian opponent in just 98 minutes on Rod Laver Arena.

The 26-year-old world number three, who finished last season with the biggest win of his career at the ATP Tour finals, hit 21 winners and toyed with his outclassed opponent at times.

Dimitrov sealed victory on his second match point when Novak netted a backhand and will next face another qualifier in either American Mackenzie McDonald or Swede Elias Ymer.