Australian police arrested 10 people, many of them British, across Melbourne early on Sunday as part of an operation to smash a "multi-million dollar" match fixing ring centred on the second tier Victorian Premier League.

Police said their investigation into match fixing in the 12-team league started in August and had been prompted by information provided by the national governing body, Football Federation of Australia (FFA). 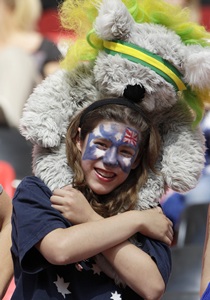 "It is believed the players and staff involved are all affiliated with the one sporting club," read a Victoria Police statement.

"Many of the players arrested are from the United Kingdom and were playing in the Victorian league in their off-season."

Those arrested could face sentences of up to 10 years in prison if found guilty of match fixing.

The FFA said they were nine players and a coach from the Southern Stars club and commended the action of the police in making the arrests.

"The integrity of football is paramount," FFA chief David Gallop said in a statement.

"We provided information to Victoria Police within 24 hours of receiving an alert from our international betting integrity monitoring agents.

"We're determined to keep football clean. Alongside other sports bodies in Australia and globally, we must eradicate corrupt behaviour from sport."

The arrests form the latest in a string of match fixing scandals around the world in a year when Europol said it had cracked a syndicate accused of having manipulated 380 games between 2011 and 2013.

Victoria police Deputy Commissioner Graham Ashton said there was a big threat of match fixing in Australia because of the attractiveness of the time zone to gamblers in other countries.

"It's believed there has been estimated betting winnings in Australia and overseas of more than A$2 million (1.1 million pounds) identified to date in connection with this particular operation," he said in the statement.

"We will continue to work with the relevant sporting codes and the Australian Crime Commission to create an environment that is hostile to those seeking to engage in illegal activities involving our sporting codes."