Images from Day 6 of the 2022 Australian Open at Melbourne Park on Saturday. 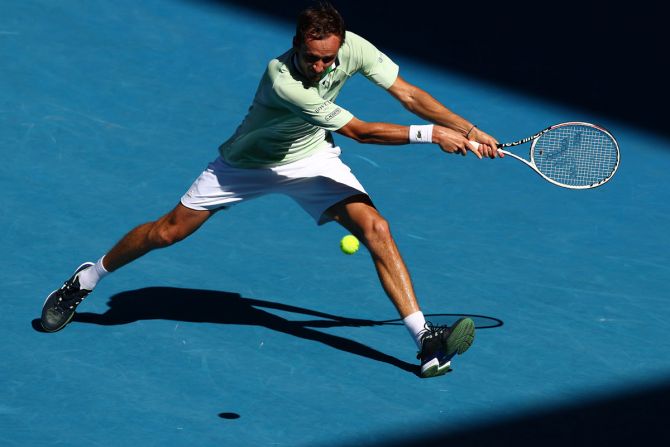 World number two Daniil Medvedev swept aside Dutch Botic van de Zandschulp 6-4, 6-4, 6-2 on Saturday to reach the fourth round of the Australian Open and stay on track for a second successive Grand Slam title.

Van de Zandschulp, ranked 57th in the world, was the only player to take a set off the Russian when the pair met in their previous meeting at last year's US Open, which Medvedev went on to win for his first major title.

Medvedev, the highest-ranked player remaining in the men's draw due to the absence of Serb Novak Djokovic, made it look easy on Saturday, breaking his opponent's serve four times in the match to win under two hours at the Margaret Court Arena.

The 2021 Melbourne Park finalist will meet either Australian wildcard Christopher O'Connell or American Maxime Cressy for a place in the quarter-finals.

Cornet makes it a birthday to remember! 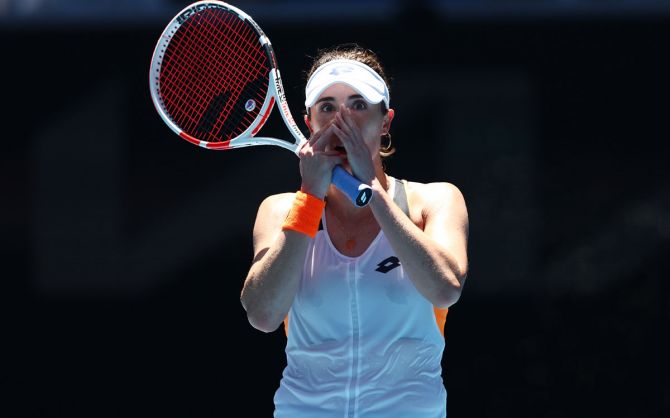 IMAGE: Alize Cornet celebrated her 32nd birthday in style as she fought back from a set and a double-break down to beat 29th-seeded Tamara Zidansek of Slovenia. Photograph: Clive Brunskill/Getty Images

Alize Cornet celebrated her 32nd birthday by staging a stunning comeback to reach the second week at the Australian Open on Saturday -- 13 years after the Frenchwoman last made the fourth round at the Melbourne Park major.

The former world number 11 fought back from a set and a double-break down to beat 29th-seeded Tamara Zidansek of Slovenia 4-6, 6-4, 6-2 in two hours and 43 minutes at Margaret Court Arena.

Cornet, who has slipped to 61st in the rankings and has said the 2022 season could be her last on Tour, said she was moved after the crowd sang 'Happy Birthday' to her.

"It's definitely a very, very special victory being back in the second week 13 years after my first second week at the Australian Open. It's quite special. The day of my birthday, I mean, what else can I ask for?"

Playing in her 60th consecutive major, Cornet lost the opening set and found herself trailing 4-1 in the second but dug deep to win 11 of the last 13 games for the victory.

Another win would take her to a maiden quarter-final at a major. To do that she will have to get past multiple Grand Slam winner Simon Halep of Romania.

While Cornet may decide to call it a day after the season she said she has lost none of her passion for the game.

"I love the game as much as I used to. I'm passionate the same way. I'm still fighting like with all my heart," said Cornet, who got into a verbal altercation with the umpire after getting a time violation.

"I just have more experience. Maybe I know how to handle a little bit better my emotions sometimes. Not all the time, would be too easy."

Swiatek sails through to fourth round 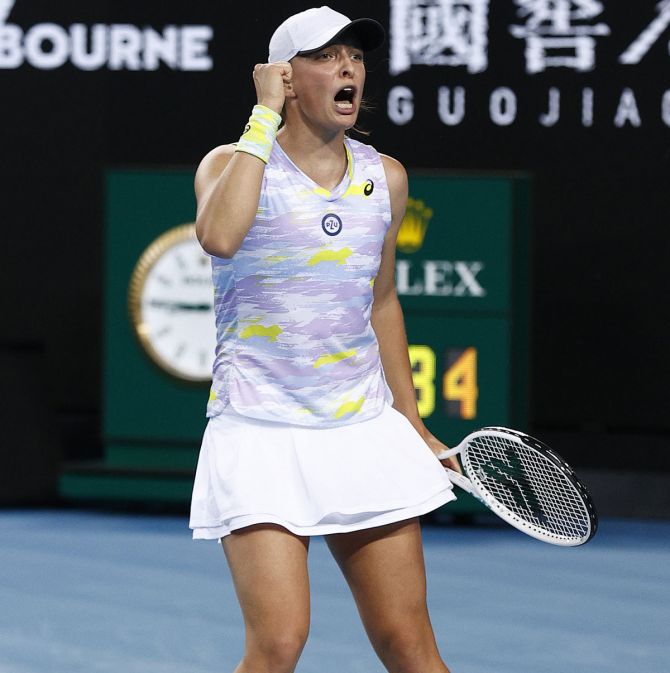 IMAGE: Iga Swiatek hit 24 winners and broke Kasatkina's serve twice in each set to cruise through the contest at Margaret Court Arena in one hour and 34 minutes. Photograph: Darrian Traynor/Getty Images

Poland's former French Open champion Iga Swiatek dominated from the baseline to roll over Daria Kasatkina of Russia 6-2 6-3 on Saturday to storm into the Australian Open fourth round.

The 23rd-ranked Kasatkina, a former top-10 player, won the pair's only previous meeting in 2021 but that match was played on grass.

Seventh-seeded Swiatek, who won the claycourt Grand Slam at Roland Garros in 2020, hit 24 winners and broke Kasatkina's serve twice in each set to cruise through the contest at Margaret Court Arena in one hour and 34 minutes.

The 20-year-old will next meet either another Russian in 10th seed Anastasia Pavlyuchenkova or 38th-ranked Sorana Cirstea of Romania for a place in the quarter-finals at Melbourne Park.

"The match was really intense," Swiatek, who has lost only 12 games across three matches this week in the year's opening major, said on court. "It's the beginning of the season so I am pretty fresh and pumped up."

Tsitsipas beats Paire without realising it to reach last 16 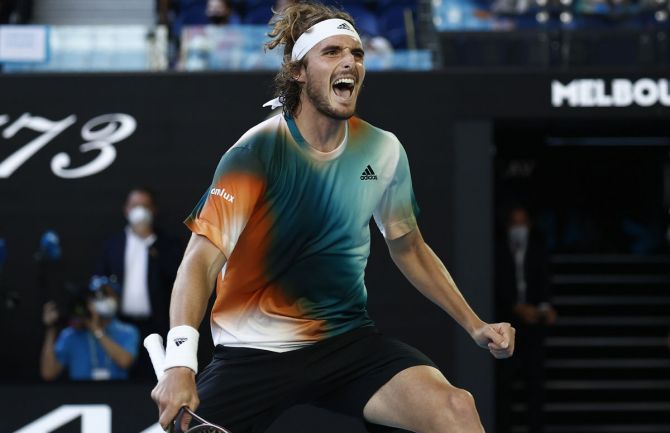 Stefanos Tsitsipas staved off the incendiary Benoit Paire to reach the Australian Open fourth round on Saturday with a tough 6-3, 7-5, 6-7(2), 6-4 win but appeared not to realise the game was over after converting match point.

Paire dunked a forehand into the net on the first of three match points when serving to stay in the match, but fourth seed Tsitsipas walked to the back of the court rather than approach the net.

The Greek turned around at the baseline with a look of surprise on his face, before walking forward to acknowledge Paire.

"I'm pretty glad with that win, Benoit is someone I say is one of the biggest stars in our game," said Tsitsipas, a former semi-finalist at Melbourne Park.

Having held Paire at bay at Rod Laver Arena, the Greek crumbled in the third set tiebreak to let the Frenchman back into the match.

Paire kept in touch to 4-4 in the fourth set before conceding the match points with a double-fault.

Tsitsipas will meet American Taylor Fritz for a place in the quarter-finals. 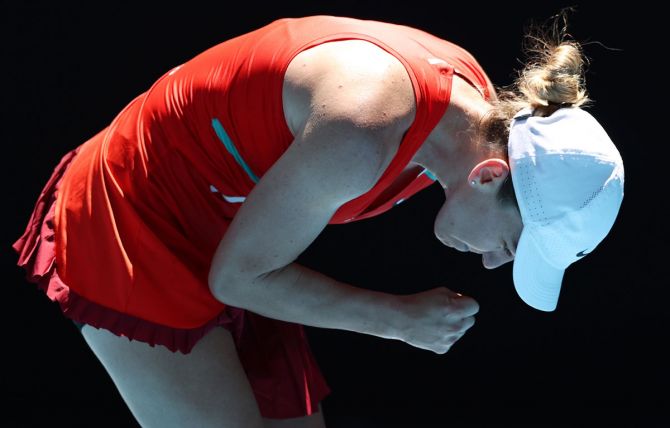 Simona Halep continued her rampaging start to the season with a 6-2, 6-1 demolition of Montenegrin trailblazer Danka Kovinic to reach the last 16 of the Australian Open on Saturday.

The 14th seeded Romanian fired up on a baking hot day at John Cain Arena to completely overpower Kovinic, who had dumped US Open champion Emma Raducanu out in her previous match, becoming her nation's first player to reach the third round of a Grand Slam singles tournament.

After missing Wimbledon and the French Open in an injury-plagued 2021, Halep is now back to peak fitness and has notched eight straight wins, including a warm-up title in Melbourne.

"Well, I feel great that I can play the fourth round again," said Halep, who was beaten by Serena Williams in the quarter-finals last year.

"In front of this crowd is always a pleasure, so thank you everybody for staying in this heat because it's super hot today." 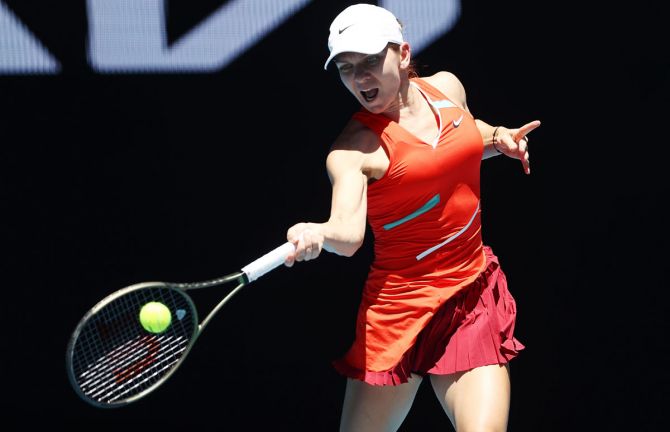 Twice Grand Slam champion Halep, who reached the 2018 final at Melbourne Park, will play France's Alize Cornet for a place in the quarter-finals.

"I feel like I played great, (Kovinic) was a little bit tired, she had a tough match before me," added Halep.

"I feel good, more confident now because last year was a tough year and now I just enjoy playing tennis because I'm healthy." 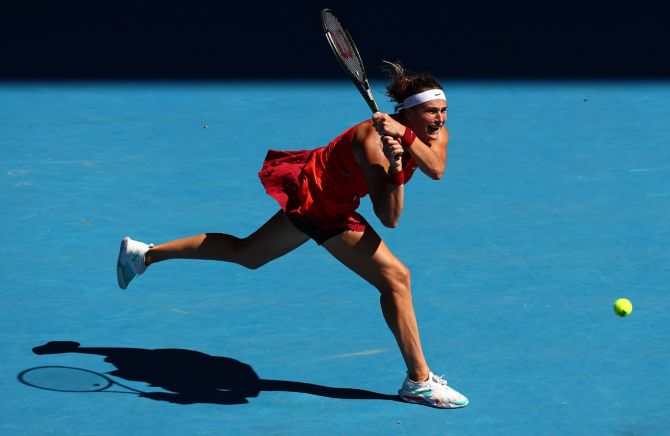 World number two Aryna Sabalenka showed her fighting qualities again on Saturday as the Belarusian came back from a set down to defeat Marketa Vondrousova 4-6, 6-3, 6-1 and move into the fourth round of the Australian Open.

Sabalenka surrendered the opening set for the third match in a row, overcoming early serving issues to pummel the Czech into submission.

"She played unbelievable tennis today. I pushed myself really hard and I'm really happy with this win.

"I had some trouble (with my serve), I really expect in the next match a great serve. I'll just keep working on my serve and keep hoping it gets better with every match."

Sabalenka's service struggles continued on Margaret Court Arena, with the 23-year-old double faulting in the opening game to gift Vondrousova an early advantage.

While the players traded additional breaks midway through the set, Vondrousova remained resolute in the face of Sabalenka's heavy hitting to take the opener in 38 minutes.

But the two-time Grand Slam semi-finalist found her rhythm in the second set, breaking Vondrousova's serve in the second game with a powerful crosscourt backhand before going on to level the match.

Sabalenka was even more decisive in the decider, breaking Vondrousova on three occasions to secure the win and set up a fourth round meeting against Kaia Kanepi.

"I just want to push myself and see how far I can go."