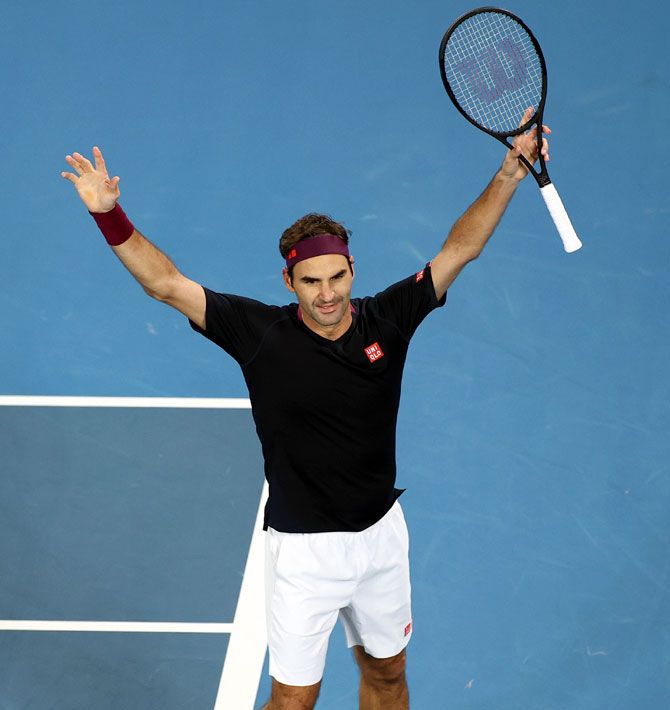 Roger Federer looked defeat full in the face before rallying in the 10-point tie-breaker to edge local battler John Millman in a five-set thriller on Friday night and reach the last 16 of the Australian Open.

The 20-times Grand Slam champion made an extraordinary 82 unforced errors to go with 62 winners in a contest that was decided by the extended tie-break introduced to prevent even longer contests.

Even that was not straightforward for Federer.

The apparently indefatigable Millman held leads of 5-2 and 8-4 on the back of some brilliant tennis, forcing 38-year-old Federer to rattle off five straight points before securing the victory with a cross-court forehand winner.

"Thank God it was a super tie-breaker or I would have lost that one. John played a great match ... he deserves more than half of this one," said a relieved Federer, who will play Hungarian Marton Fucsovics in the fourth round.

"He came up with all that good stuff at the start of the tie-break and I was saying 'Okay, I didn't play that bad' and was getting ready for the press conference.

"It was really Johnny who made it difficult for me tonight." 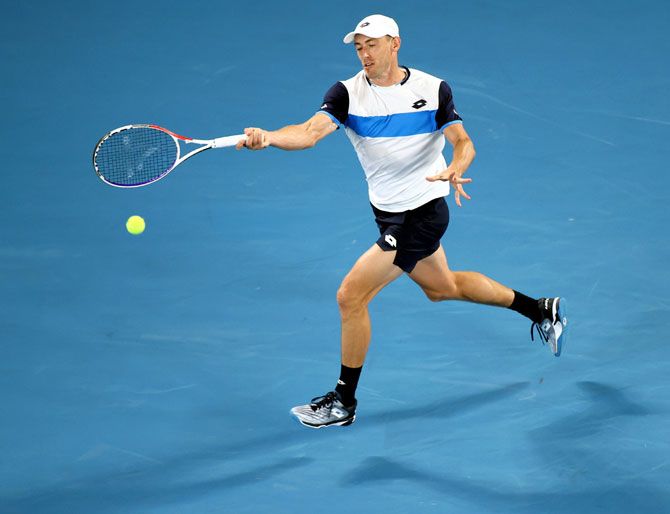 IMAGE: John Millman had got the better of Roger Federer at the 2018 US Open. Photograph: Hannah Peters/Getty Images

Millman, who got the better of the Swiss at the 2018 U.S. Open, produced a fighting performance worthy of the archetypal Australian battler Lleyton Hewitt, who was watching court side.

"Disappointed, left it all out there. Didn't win," said the crestfallen Australian.

"Roger made it tough, that's what the best players do.

"I know I'll cop some (criticism) but I think when you understand tennis and stuff, I don't think there was a whole lot wrong.

"It would have been great to serve an ace and put it to bed but ... I played some alright tennis to get there, to that stage."

Millman was on the front foot from the start and won the opening set before Federer grabbed the second on a tiebreak and the third with a late break of serve.

The Australian was never going to fold, however, and he pounced to break the six-times Australian Open champion for 4-3 after one of the many lengthy rallies that studded the match before taking the fourth set.

Millman also got an early break in the decider but Federer broke back and, as the crowd roared both players to the rafters, the match headed towards its dramatic denouement.

Defeat would have meant Federer's earliest exit from a Grand Slam for five years but he would not have been alone as a big name departing after an upset on Friday.

The last three women's champions - Naomi Osaka, Caroline Wozniacki and Serena Williams - all went out along with Greek young gun Stefanos Tsitsipas as a rather predictable tournament suddenly exploded into life.

Djokovic puts on serving masterclass to breeze past Nishioka 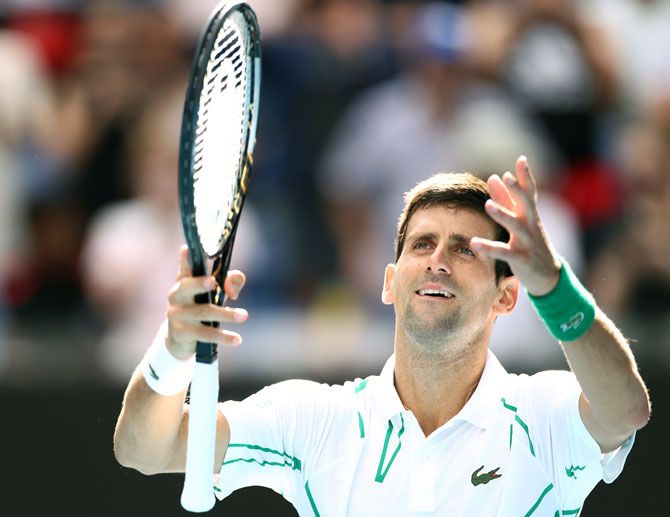 Champion Novak Djokovic put on an impeccable serving display against Japanese Yoshihito Nishioka to canter to a 6-3, 6-2, 6-2 win in the third round of the Australian Open on Friday, staying on course for a record-extending eighth title at Melbourne Park.

The Serb, who defeated another Japanese in Tatsuma Ito in his previous round, smashed 17 aces, won 93% points on his first serve and faced just a single breakpoint against the hapless Nishioka in the match that lasted only an hour and 25 minutes.

Considered widely as the best returner of first serves and baseline player among contemporaries, Friday's match at the Rod Laver Arena showed that Djokovic was also right up there with the best servers in the game. 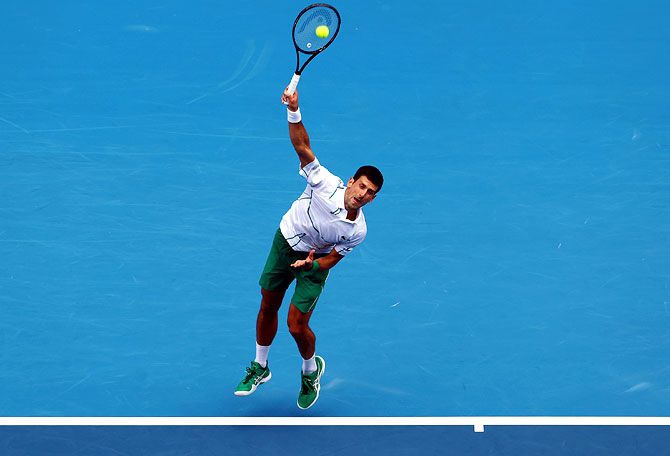 In astonishing statistics, the second seed lost just a single point on serve in the first two sets and eight overall against the 24-year-old Nishioka.

"Definitely one of the best serving matches I've had lately, inspired by my coach Goran Ivanisevic," Djokovic said.

"There are a lot of technical details you can talk about, but sometimes less is more. It's all about the rhythm and balance ... So far, it's been working really well."

Djokovic, who beat Rafa Nadal in last year's final to win a record seventh Australian Open title, broke his left-handed opponent's serve once in the first set, twice each in the next two, and hit 40 winners.

The victory on Friday was the 21st straight win for Djokovic at Grand Slams against left-handed players since the 32-year-old Serb lost to Nadal in the 2014 Roland Garros final. 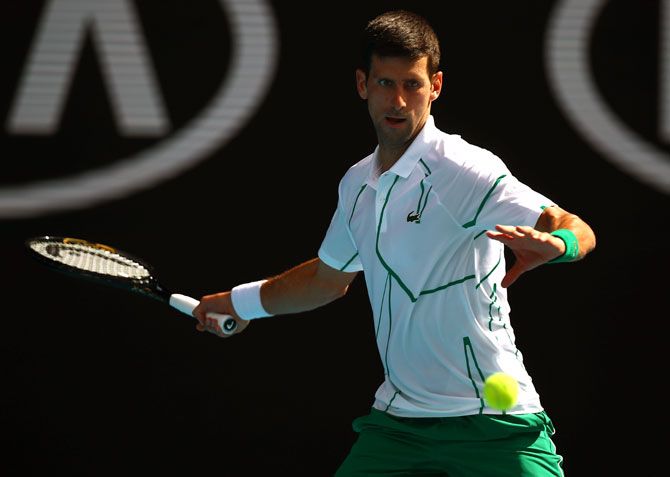 IMAGE: The victory on Friday was the 21st straight win for Novak Djokovic at Grand Slams against left-handed players since the 32-year-old Serb lost to Nadal in the 2014 Roland Garros final. Photograph: Hannah Mckay/Reuters

In ominous signs for the other title contenders in the second week at Melbourne Park, Djokovic said there is still room for improvement for him.

"You can always improve. I think that's the beauty of the sport," he said. "I think in terms of service rhythm that I have at the moment, winning percentage from the first serves is really high.

"So that's probably as best as my serve can actually be in the moment, which I'm very pleased with. It allows me to go quicker through my games and win more dominantly my service games and put additional pressure on the service games of my opponents.

"That's definitely something that's useful going towards the second week of the Grand Slam. I love playing on the court. I like the conditions. I'm starting to feel very, very comfortable and compact on the court. I'm going to try to keep that going."

Djokovic will next meet Argentine Diego Schwartzman, who beat Serb Dusan Lajovic 6-2 6-3 7-6(7) earlier on Friday, an opponent the world number two termed as "one of the quickest players on Tour". 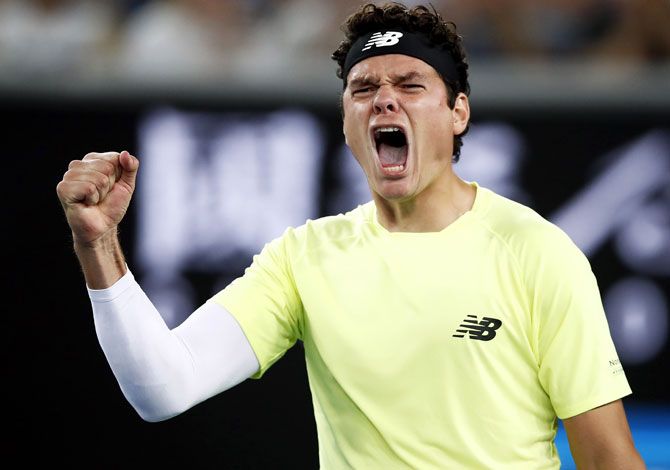 Canadian Milos Raonic served and volleyed with robotic precision to bundle Greek sixth seed Stefanos Tsitsipas out of the Australian Open with a 7-5, 6-4, 7-6(2) victory in the third round on Friday.

Raonic, who reached the last four at Melbourne Park in 2016 and the Wimbledon final the same year, hit 19 aces and 55 winners and did not give ATP Finals champion Tsitsipas a single breakpoint opportunity in the match.

Cilic, who won the 2014 US Open and reached the final at Melbourne Park in 2018, also had a five-set win in his previous round against Frenchman Benoit Paire but the Croatian had no doubt he will fully recover before facing Raonic.

Tsitsipas was broken once in each of the first and second sets before Raonic claimed the tiebreak comfortably and sealed their maiden meeting with a forehand crosscourt winner.

"I knew it was going to be important that I play well but I play consistently well throughout the match," Raonic said. "I wasn't having any fluctuations. I think that was how I was going to create my opportunities, and it worked out well.

Tsitsipas, who last year defeated Roger Federer on his way to the last four, said it was "monotonic" and sometimes "boring" to take on a big-server like Raonic.

"He's playing forehands from all over the court, and you don't really know where you should stand exactly, because he's just so fast and just turning around, hitting those forehands," Tsitsipas said. "Serve is great, one of the best in the game.

"I felt a bit stupid returning his serves. I felt like I was slow. My anticipation was not there."

Melbourne's large Greek community was once again out in full force at the Margaret Court Arena to support Tsitsipas but even their constant chants of "Stefanos Tsitsipas, ole, ole, ole" was not enough to lift the Athens-born player.

Play was held up briefly due to Greek fans singing just outside one of the entry doors and the umpire had to repeatedly urge security officials to close the door to allow Raonic to continue serving.

But Raonic maintained a Zen-like focus amid all the cacophony and went about his job like a machine.

© Copyright 2022 Reuters Limited. All rights reserved. Republication or redistribution of Reuters content, including by framing or similar means, is expressly prohibited without the prior written consent of Reuters. Reuters shall not be liable for any errors or delays in the content, or for any actions taken in reliance thereon.
Related News: Novak Djokovic, Yoshihito Nishioka, Getty Images, IMAGE, Serb Dusan Lajovic
COMMENT
Print this article 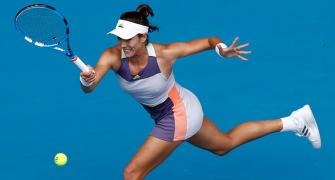 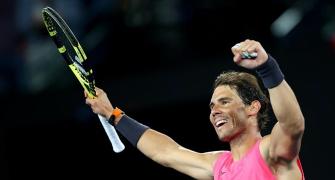 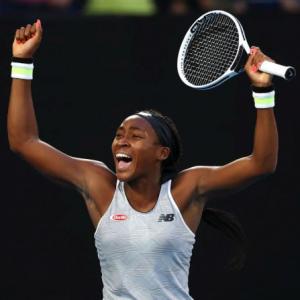 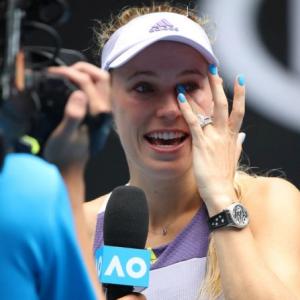