Rose, the 2013 US Open champion, conjured up seven birdies, including two at the last two holes, in a day's best round of 67. 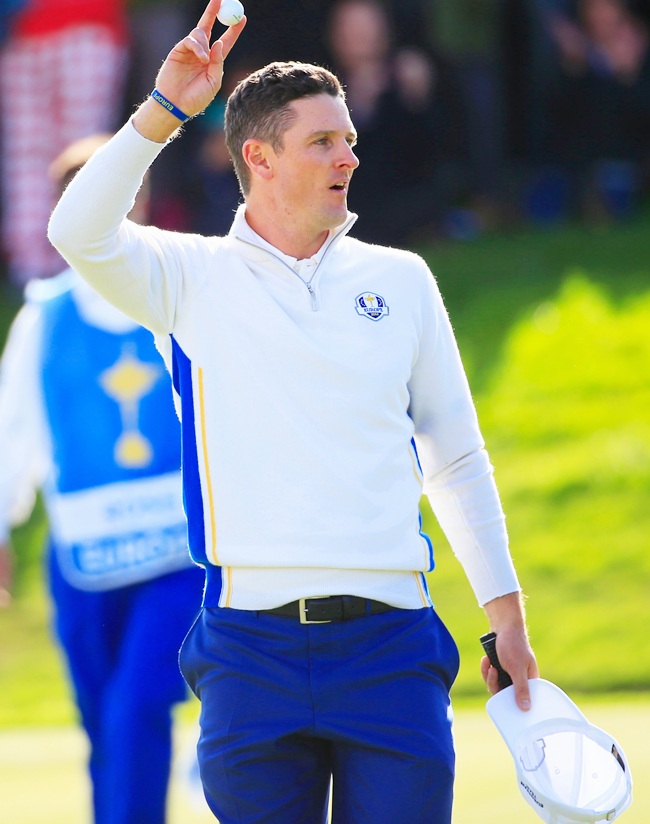 Justin Rose and Sergio Garcia led the US Masters on six under par and Jordan Spieth was lurking two shots back after an absorbing third round at a sun-drenched Augusta National on Saturday.

England's Rose and Spaniard Garcia finished one shot ahead of American Rickie Fowler and two clear of a group including 2015 Masters champion Spieth, who put together a fine four-under 68 to soar into contention.

Spieth was joined at four under by compatriots Ryan Moore and Charley Hoffman, the journeyman who led the tournament after a sparkling first-round 65 but dropped three shots over Saturday's closing holes to slip down the leaderboard.

Rose, the 2013 US Open champion, conjured up seven birdies, including two at the last two holes, in a day's best round of 67.

"The course offers you a run around the par-fives," Rose told reporters.

"I took advantage and the last two birdies put the cherry on the cake. It was a reward for staying patient on the front nine."

Garcia played a flawless back nine including two birdies to card a 70 while world number eight Fowler, like the Spaniard bidding for his first major title, signed for a 71.

Spieth put himself in position to continue his extraordinary record at the Masters, which he won in 2015 and finished tied second in 2014 and 2016.

The 23-year-old American birdied the par-three sixth hole, sunk a 20-foot putt at the eighth and produced a sumptuous iron shot into the ninth green to get to three under.

He safely negotiated Amen Corner, where he came to grief spectacularly in the final round last year, and picked up further birdies at the par-five 13th and 15th holes before dropping his only shot of the day at the par-three 16th.

"I feel great," said Spieth, who recovered from an opening 75. "After the first round I couldn't ask for much better than this. We fought back tremendously to have a chance to win the tournament."

Hoffman, the World No. 52, was putting together another solid round until he pulled a seven-iron into water at the 16th hole and made a double-bogey on the way to a level-par 72.

Also challenging were Australian Adam Scott, the 2013 winner, at three under, with 2011 champion Charl Schwartzel of South Africa another shot back.

England's Lee Westwood, runner-up last year, shot 68 to finish at one under along with Belgian Thomas Pieters, the joint overnight leader who struggled to a scrappy 75.

World No. 2  Rory McIlroy made a fast start on Saturday but was unable to maintain momentum and ended up at level par.

It was a miserable day for four-times major champion Ernie Els, who was seeking his first Masters title at the age of 47.

The South African carded a dismal round of 83 to drop out of contention in what is likely to be his final appearance at Augusta.

© Copyright 2020 Reuters Limited. All rights reserved. Republication or redistribution of Reuters content, including by framing or similar means, is expressly prohibited without the prior written consent of Reuters. Reuters shall not be liable for any errors or delays in the content, or for any actions taken in reliance thereon.
Related News: Jordan Spieth, Justin Rose, Sergio Garcia, Rickie Fowler, Augusta National
SHARE THIS STORYCOMMENT
Print this article